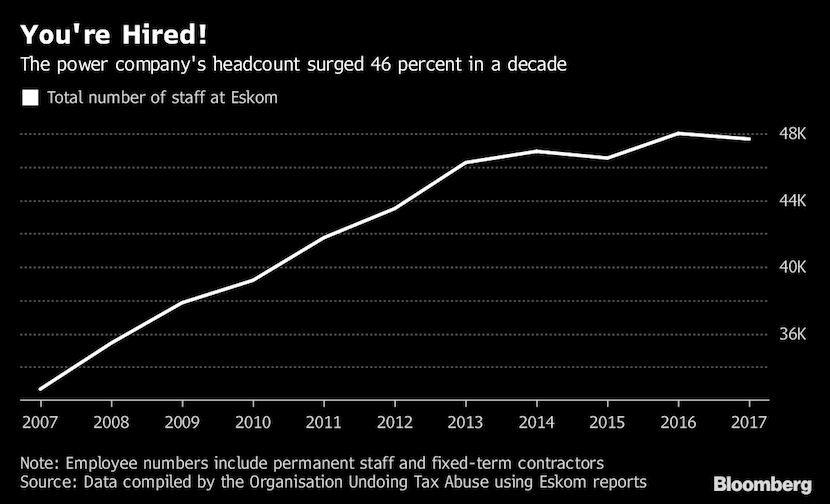 JOHANNESBURG — It’s no secret that Eskom poses one of the biggest risks to the South African economy. And it was no surprise that one of Cyril Ramaphosa’s first decisions as president of South Africa, was an overhaul of the power utility board. Jabu Mabuza was appointed chairman, and brought with him a wealth of experience, especially given his role as chair at Telkom, an entity which faced similar problems to Eskom, a bloated workforce draining cash flow. The turn around is in effect at the telecommunications firm, and Eskom says plans to manage its employment numbers is being rolled out. And while citizens and rating agencies wait with bated breath, hopefully for South Africa’s sake we will see another feather in the cap of Jabu Mabuza. – Stuart Lowman

State-owned Eskom, seen by Goldman Sachs Group Inc. as the biggest single risk to the South African economy, employed about 47,600 people as of March last year, compared with 32,600 a decade ago.

A bloated workforce means high costs for a company struggling with cash flow. But it’s stuck in a three-way tug of war between labor, which rejects job cuts, the ruling African National Congress, which wants to boost the economy, and funders, who are leery of financing Eskom because of the way it’s been managed.

“We are currently rolling out a plan to manage our employee numbers to optimal levels,” Eskom said in an emailed response to questions, without detailing what that level might be. “We have implemented numerous levers to manage employee costs ranging from not replacing all attrition, efficiently managing variable employee costs, to re-prioritizing training and development.”

Eskom’s financial woes are linked to allegations of corruption, weak demand, the rejection of many of its proposals for tariff increases and delinquent municipalities not paying their bills. Big staff costs have made an already bad situation worse.

A World Bank study in 2016 found that South African utilities pay workers more than double the norm in 35 other countries on the continent, with staff costs coming in at an average $61,000 per employee per year. Eskom is potentially overstaffed by 66 percent, the report said.

“We have noted the World Bank study,” Eskom said. “The issue of Eskom staffing requirements versus the status quo has solicited views from a number of stakeholders.”

Staff costs also increased faster than consumer price inflation, which rose 84 percent over the 10-year period, while Eskom’s power capacity was 0.72 megavolt amps per employee, according to data in its latest annual report. That compared with 30.98 MVA for every staff member at Power Grid Corp. of India Ltd., that country’s largest transmission utility. 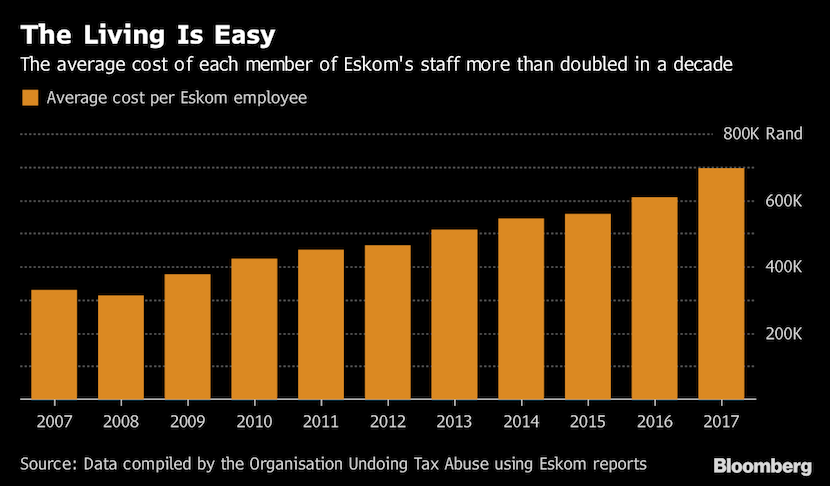 “The new Eskom board and management are going to have to make some very tough decisions to slash employment costs,” Anton Eberhard, professor at the University of Cape Town’s Graduate School of Business, said in an emailed response to questions.

Since President Cyril Ramaphosa took over the leadership of the African National Congress and the country from his scandal-ridden predecessor Jacob Zuma, he’s overseen sweeping changes to the Eskom board. Jabu Mabuza, an outspoken Zuma critic, was named chairman in January. Newly appointed Public Enterprises Minister Pravin Gordhan, whose remit includes supervising Eskom, said a permanent chief executive officer should be appointed by April.

Eskom may default on debt if it can’t persuade investors to hand over an extra R72 billion ($6.2 billion). It owes more than R12.2 billion this year, according to data compiled by Bloomberg, with that figure rising to almost R44 billion by 2021. To avoid insolvency, Eskom took a R5 billion bridging loan and signed a R20 billion short-term credit facility in February. 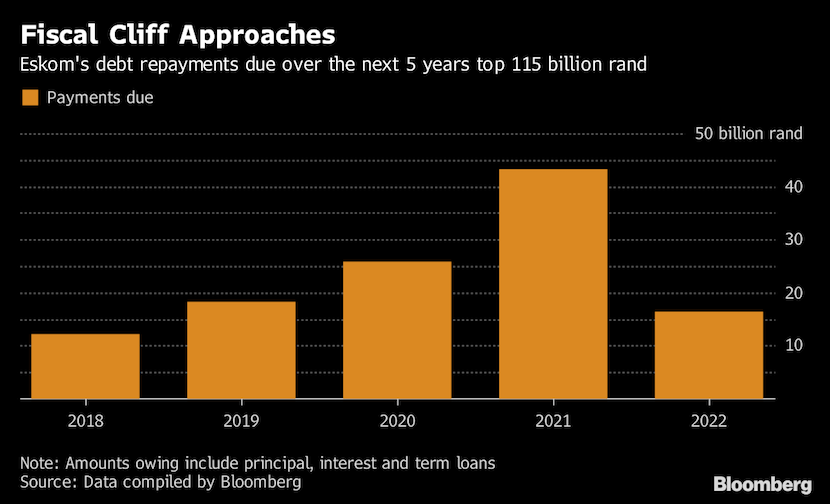 Management will have to scrap between 13,000 and 15,000 jobs, said Wayne Duvenage, CEO of the non-profit Organisation Undoing Tax Abuse, which has studied Eskom’s staffing, costs and asset valuations. “If Eskom gets its headcount right and removes the unnecessary higher-paid positions, it should be able to cut its annual salary bill by R10 billion.”

Eskom will need all the money it can save after Moody’s Investors Service downgraded its credit rating again on March 28, citing a lack of clarity regarding the power utility’s plans to stabilize its finances. Eskom’s acting CEO Phakamani Hadebe said the board was disappointed, but working hard to stabilize the company’s credit profile and improve its ratings.

With South Africa’s unemployment rate at 26.7 percent, unions are opposed to dismissals at the state utility. Corruption at the senior-management level needs to be tackled first, according to Phakamile Hlubi, a spokeswoman for the National Union of Metalworkers of South Africa.

Mabuza said last month that Eskom’s debt-to-equity ratios were unacceptable at more than 70 percent compared to the benchmark of around 50 percent. Non-core assets, including a housing company, may need to be disposed of, he said.

“Some would say that Eskom has passed the point of no return,” Duvenage said. However, “it’s extremely important to our economy and the tax-payer that Eskom remains solvent. There is no doubt that Eskom needs to develop a different business model.”