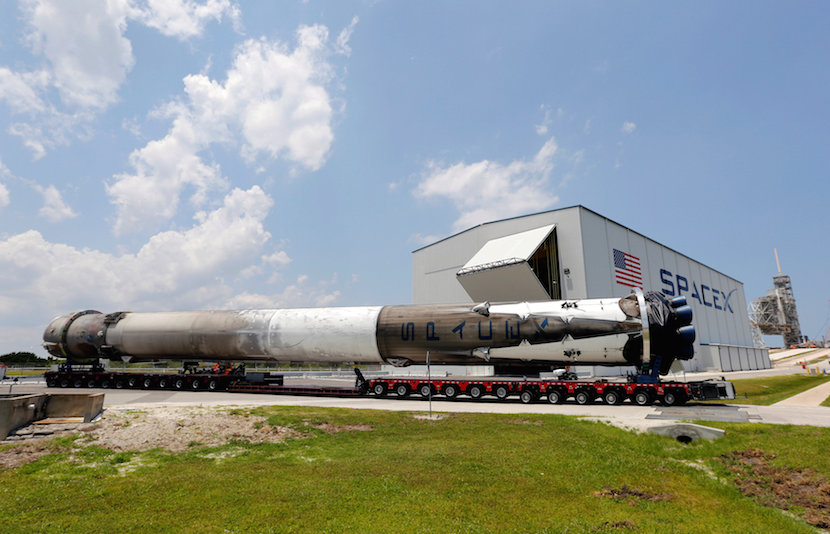 Competition stimulated by entrepreneurship causes a ripple effect in unexpected places. Like the way Pretoria-raised Elon Musk‘s transformation of the space sector has turned that industry on its head, not just in his American home. Potentially even more so in Europe where an expensive project is moving so slowly it looks like a zimmer frame walker against Musk’s Olympics. SpaceX’s latest breakthrough has finally woken the Europeans from their slumber. They badly under-estimated the South African-born super entrepreneur. Now they’re counting the cost. – Alec Hogg

(Bloomberg) — The success of Elon Musk’s SpaceX industrial ventures has given Europe’s space industry a kick in the pants.

After three flawless landings of the first stage of Space Exploration Technologies Corp.’s Falcon 9 rocket on a drone barge in the Atlantic ocean since April, the 44-year-old entrepreneur announced on Tuesday that he plans to start reusing rockets as soon as September. In contrast, Europe’s non-reusable competitor, Ariane 6, may be ready only in 2020, while a reusable version, a project for which was unveiled this month, may come even later.

“SpaceX is like a giant wake up call,” Jean-Yves Le Gall, head of CNES, the French space agency, said in an interview. “Six to nine months ago many in Europe thought Elon Musk was just hot air, even among the big shots in the space industry. But he showed he was able to do it, to potentially reuse rockets one day. He’s clearly shaking things up.”

More than just European pride is at stake. The space industry represents 38,000 jobs in Europe, most of them in France, according to Aerospace Defense Industries, an industry group. With the sector at the cusp of a new era of space missions that will broaden the client base for satellites and open the way for exploration projects hitherto unreachable, Europe can’t afford to miss the boat.

Must Watch: The transport revolution – from Musk’s ‘Sandshark’ to 007 jetpacks

A cost-effective Europe-made rocket would allow the continent to remain one of the biggest players in the $6 billion global market for payload launchers and also be part of major long-term missions such as a manned trips to Mars. Before Musk’s reusable success began changing the game, the launcher market was estimated to reach $8.4 billion in 2023, according to Mountain View, California-based market research firm Frost & Sullivan.

Under pressure from Musk, the South-Africa born Canadian-American, the industry worldwide, including in China and India, is rethinking its approach to drive down costs. Space-launcher companies, which put satellites, cargo and humans in space, are seeking to bring prices down 50 percent or more.

In April, SpaceX landed the first stage of the Falcon 9 rocket back on a drone barge about 200 miles off the U.S. Atlantic coast. It has since made two other successful landings, after sending payloads into the upper atmosphere. It will try again on June 14.

Long considered a brash upstart nipping at the heels of staid aerospace giants, SpaceX is coming of age 14 years after it was founded by Musk with the lofty — and many have said unrealistic — goal of revolutionizing spacecraft and colonizing Mars. SpaceX is now within striking distance of becoming dominant in the payload business. It says it plans to fly 18 missions this year, triple the number in 2015.

The California-based company said it plans to use a previously-flown Falcon 9 booster stage later this year and cut the flight price further down from the current $61 million it says it charges for commercial payloads. Arianespace, one of the world’s biggest commercial satellite launchers, which will use the Ariane 6, claims its prices will be close to those of SpaceX.

While the cost of re-usable rockets, technical hurdles and market viability have yet to be tested, Le Gall says Musk is well advanced and that Europe must move faster.

On June 1, the CNES and  Airbus Safran Launchers — Europe’s biggest space company — unveiled an engine project, dubbed “Prometheus,” which will make the future Ariane 6 rocket reusable and send payloads in space for a quarter of the price offered by the current launcher, Ariane 5. The engine will be first tested in 2020. The problem for Europe is that while SpaceX is already testing its reusable rockets and slashing prices, a reusable Ariane 6 is just a glimmer in the eyes of scientists.

“What we want it is to stand ready should re-usability become a reality,” Le Gall said, pledging to ask European partners for more than the current 100 million euros ($115 million) the region has so far earmarked for the program.

Being nimble in a fast-moving arena can be a hurdle for the European project, which combines mostly the region’s five biggest economies — Germany, France, the U.K., Italy and Spain — industrial groups in these countries, the European Space Agency and the institutions of the European Union. Getting these multiple entities to work together in concert remains a challenge.

While Ariane 6, in its non-reusable form is likely to be a formidable direct competitor for SpaceX’s Falcon 9, it is still four years away from being ready. Thierry Mandon, the French Minister for Research and Higher Education in charge of space matters, says he isn’t worried, dismissing the potential Musk threat.

“At the end of the day, what matters is the cost, however you get there — re-usability or something else,” he said in an interview. “We may have lacked vision, or coordination, in Europe. But we don’t know the end of the story yet.”

For France’s Le Gall, Europe’s contemptuous inability to take Musk seriously dates back years. He remembers a conference in Vietnam about a decade ago where the billionaire “showed up in torn jeans and with a plastic bag. He told us — the chiefs of the three biggest rocket launchers worldwide — I am here and your are dead. One of us replied: you talk, we launch. Had we known…”