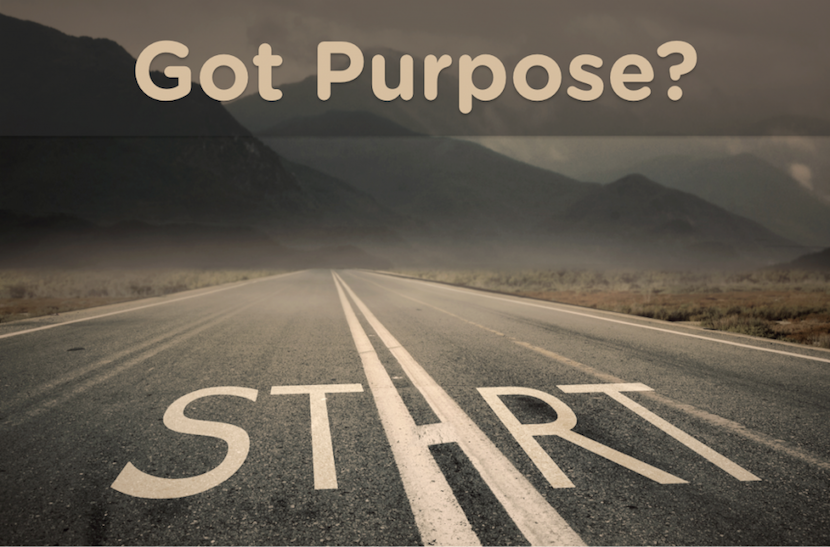 Purpose, a concept that’s plagued countless philosophers through the ages. And it’s a concept that’s plagued many businesses. Coolfidence’s Ronnie Apteker puts his mind to the challenge, asking the three simple questions – why, how and where – and ultimately what defines success? The answers to each will vary depending on who’s asking but it’s the approach that matters. And no matter what you’re doing just – Work like you don’t need the money; love like you have never been hurt before; and dance like nobody is watching. – Stuart Lowman

At some point in your life you are going to think about the following 3 questions: Why, how and where? As in, why does your company exist? How does it exist? And, where is it going? Purpose is concerned with why someone or something exists, and specifically in today’s discussion, why a business exists. Any business. Especially yours. A value system describes how a company exists. And goals describe where a company is going. Purpose describes what a company, your company, actually does. Values can be thought of as the house rules of an organization – values define the way that you operate. And goals are the milestones you constantly set and aim for.

I am going to jump right in with one of my favourite quotes, from the son of the founder of Merck, one of the world’s largest corporations. In 1950, George Merck II said, “We try to remember that medicine is for the patient. We try never to forget that medicine is for the people. It is not for the profits. The profits follow, and if we have remembered that, they have never failed to appear. The better we have remembered it, the larger they have been.” This description of Merck’s purpose captures the spirit that I am trying to share here today. Merck saves life through medicine. And the more they do so, they more people pay them. It as simple as that. Merck would not sell a placebo that didn’t help anyone, even if it meant they could boost the bottom line. People trust them because they stand for something more than making money. And as a consequence of them being true to their mission they make a fortune. People trust them because they are trying to make a difference in the world. The compelling wisdom that stems from this is as follows: the more of a difference they do in fact make, the more money they take in.

Purpose is something you can never realize. Merck can never complete the mission of saving life through medicine. Why? Because there are always new illnesses in the world and everyday more and more people get sick and need help. Purpose is something that does evolve over time but it can never be completed. Disney, another visionary company, can never complete the mission of making children smile. Every day children should smile, and there are always more and more children coming into the world.

The fundamental never-ending nature of purpose is captured in an inspiring comment from Walt Disney who in his last years said, “Disneyland will never be complete as long as there is imagination left in the world.” Imagination is the key to purpose.

The Disney Corporation is always worth some deeper exploration. This is a fascinating company whose purpose has evolved over time. Over 50 years ago Disney had the mission of making cartoons. So, where do theme parks, for example, fit into their purpose? It didn’t 50 years ago. But today, the mission of making children smile incorporates cartoon making, the Mickey Mouse club, Disneyland, Euro-Disney, The Disney Stores, etc. Purpose evolves over time but can never be completed.

The purpose of Disney also warrants a closer look. If you heard that Disney’s mission was to entertain people you would probably not have thought to question it. But Disney does not exist to entertain people. Just think for a minute. People include adults. And adults smile at some pretty hectic things these days. Sex and violence is not something children should see. Purpose, if stated correctly, should serve to guide an organization. The word children is key in the case of Disney. Their mission is about youth and innocence.

What is the difference?

What is it that differentiates two companies? In the book, Built To Last, the following companies are explored and compared: Boeing and McDonnell Douglas, Disney and Columbia, Hewlett Packard and Texas Instruments, Sony and Kenwood, Merck and Pfizer, IBM and Burroughs, General Electric and Westinghouse, Procter & Gamble and Colgate, Ford and General Motors. All of these examples have very similar missions within their respective industry sectors. What is then that makes one company more successful when compared to another organization in the same arena. The word is authenticity. The visionary companies of our time have always stood for something far more inspiring than making money. And is very interesting to note that any business that focused purely on profits never outperformed a competitor who stood for something more significant and humane.

I guess an important question to ask is how does one measure success? A successful business is not a business that doesn’t go bankrupt. And in the same light, a successful marriage is not a marriage that doesn’t land up in divorce. A company can continue without succeeding. Many companies are still running, filled with unhappy staff and miserable customers. Money is not the only way to measure the success of a business. And all the companies listed in the paragraph above make a lot of money. Anyone reading this column would call all these companies successful. But what makes one company visionary? What makes one company stand out from its competitors? If you used your imagination you could come up with so many different criteria to measure success. Look at staff turnover, number of awards won, customer satisfaction, staff growth, number of smiles in the building, and so on. In the history of the business world, it is fascinating to note that all the visionary companies of the past 50 years outperformed their competitors by at least 10 times on all possible criteria specified, including profits.

Here is some text I found floating around the Internet long ago. Its wisdom continues to guide me. Work like you don’t need the money; love like you have never been hurt before; and dance like nobody is watching.