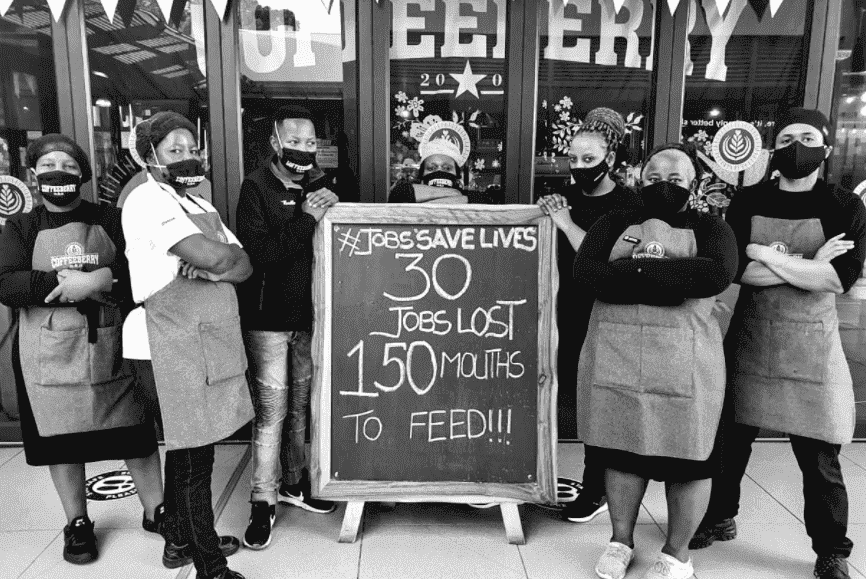 The strict lockdown regulations imposed by President Cyril Ramaphosa in response to the coronavirus pandemic have all but annihilated the restaurant industry in South Africa. As the spokesperson for the Restaurant Collective put it: “The restaurant sector is in ICU on a ventilator.”

In June, President Ramaphosa announced that certain lockdown regulations would be eased, which meant that restaurants were finally allowed to reopen for ‘sit-down’ meals only. Even this scant victory, however, was short lived as – less than a month later – President Ramaphosa reintroduced a curfew of 9pm and reinstated the ban on alcohol.

These regulations essentially rob the restaurant industry of its basic appeal. In response, thousands of restaurant workers took to the streets on Wednesday for the ‘1 million seats on the streets’ protest. The alcohol ban and curfew affects thousands upon thousands of South Africans, both directly and indirectly.

Using the hashtag #JobsSaveLives, restaurant workers are pleading with the government to ease the regulations destroying their livelihoods.

“Starvation will kill more of us than COVID through job losses and all the money borrowed for this has disappeared into ANC pockets and coffers – it is hard not to be furious!“

With taxis being permitted to load to full capacity, those in the hospitality and restaurant sectors are even more enraged at the irrationality of the restrictions killing their trade.

A number of restaurants in small towns in the Western Cape lined the streets with empty tables and chairs as they participated in the ‘million seats on the street’ protest.

Restaurants need to survive so we can continue to feed our families. #JobsSaveLives pic.twitter.com/qydRlaYwm2

Restaurant Association of South Africa :
Restaurant trade has "gone from a R7bn a month industry to R1bn a month".

A SEVENTH of its former self.
The impacts on this industry & its jobs is huge !!!#alcoholban

“Just counting the numbers put up by some of the restaurants and eateries on this post, it comes to a staggering 1 058 people either out of a job or at risk of losing their employment. Most of these folk are the only breadwinners in families where they could be 4, 6 or even 8 members. Without taking into account the many more restaurants and eateries that weren’t featured here or who have already gone out of business, this translates to at least 6 348 extra people who may go hungry if the government persists with their draconian rules instead of leading as they should. Drive by the Labour Department in Knysna and see the ever-growing queue of desperate people standing waiting to be registered. How much longer is the government going to take to realise this is not the way to go as it’s killing its own people. But do they really care?? One has to wonder.

Here was my challenge & question to them… pic.twitter.com/CgHf5SF2OE

200m long empty table with a 1000seats in Wellington, #CapeTown to raise awareness of the job lost within the tourism industry due to the lockdown @TimesLIVE @CapeTownTourism @Tourism_gov_za #JobsSaveLives pic.twitter.com/XxKAlNNag0