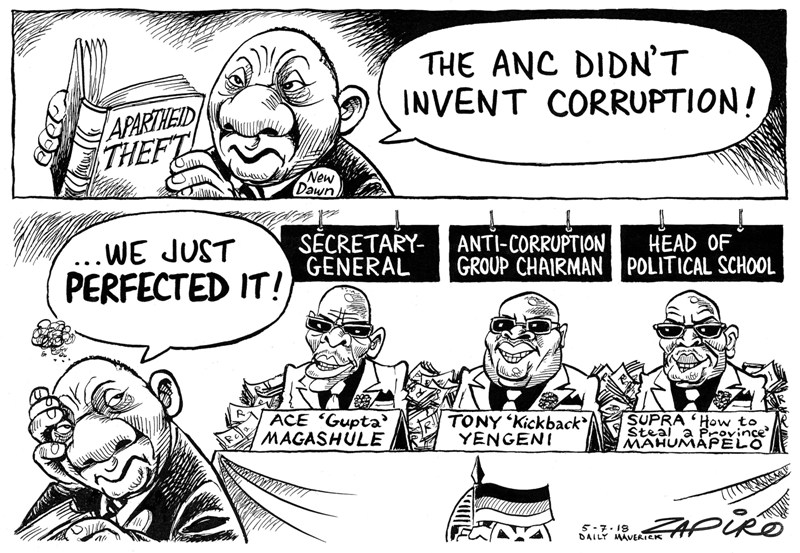 In an open letter to President Cyril Ramaphosa released on 24 July, anti-corruption fighter Herman Mashaba expressed his outrage at the government’s lack of accountability and inability to clamp down on corruption.

“I find myself writing to you, once again, out of sheer frustration over your catastrophic failure to tackle fraud, corruption and wrong-doing in government,” Mashaba writes.

Ramaphosa had addressed the nation the previous evening, stating that he was ‘concerned’ about the looting of Covid-19 relief measures. Mashaba didn’t mince his words, describing Ramaphosa as “a President who presides over an organisation that could be said to more closely resemble one of the greatest criminal syndicates in the world than a political party.”

“This is not ‘concerning’, Mr President. Concerning is how we feel about getting older every day. It is how cold it is in the mornings, or the lack of sleep we get at night. These issues are concerning. The looting of public funds intended to provide relief to people in the Covid-19 crisis is despicable. It is an act of the lowest forms of life, and it is criminal.”

Mashaba went on to mention the recent debacle involving the spokesperson to the President, Ms Khusela Diko. Diko requested a leave of absence from all official roles, pending investigations on allegations involving her and her husband in tender irregularities in the Gauteng Department of Health.

“While you are ‘concerned’ about corruption, the husband of your spokesperson scored a R125m tender as a part of the COVID-19 response,” says Mashaba.

It’s clear that Herman Mashaba would give our president a solid ‘F’ on his report card for accountability. So, what does our community have to say about the matter?

Commenting on a recent BizNews article, rage against the shebeen doesn’t have high hopes. “Nobody believes any of Cyril’s promises anymore. Nothing will come of it and Diko will have a nice long holiday at taxpayers’ expense…seen this movie many times before.”

Denis Dendrinos echoed this sentiment, saying, “This from mr ‘cigarettes on level 3… hahaha – only kidding, and alcohol with immediate effect’… yeeeah. So how much progress have we made on the previous promises to clean up corruption? Oh? None? we’ll take you seriously when we start seeing “political prisoners” again…”

President #cyrilramaphosa is essentially saying, "Trust me, my government will root out covid-19 related corruption."

How many people to date have been successfully prosecuted for state capture, mr president?

Your government has a piss poor record on fighting corruption.

“He’s so serious about corruption that his spokeswoman’s family are caught in a tender fraud. Forgive me if I never believe anything you say again Ramasnooza,” chides Mercury Marshall.

Why is he talking about corruption to us instead of addressing his cabinet? #cyrilramaphosa pic.twitter.com/lhhl5ug43G

#cyrilramaphosa, why don't you admit that you have lost controle? You tried, but failed. With each day passing it becomes more clear that the government has hidden agendas. When can we expect a full financial report on where all the money went. Detailed….🤔🤔🤔

“Good words, but as meaningless as other political claptrap until politicians senior and junior GO TO JAIL,” adds AE Neuman.

Maureen Bunden has a more empathetic view: “Too many people in government running around doing their own thing. The President needs help from honest people.”

Can we take CR seriously?

When we look at SA’s track record, we can’t help but wonder if we’ll ever see corporate and political criminals brought to justice. As Thys Du Toit said in a Rational Radio Webinar, we’ve yet to see a single person apprehended and taken into custody.

Just not sure @CyrilRamaphosa has his finger on the right pulse

Join the BizNews conversation on corruption and Covid-19

Join top broadcaster Tim Modise, Mike Marchant of Open Secrets, Wayne Duvenage of OUTA and Tebogo Khaas of the SMME Forum at the BizNews Thursday Noon Webinar. ‘The Plundemic during the Pandemic’, as Khaas calls it, has angered a lot of South Africans who are calling for drastic action to be taken. Register here: https://attendee.gotowebinar.com/register/8398038334086112016