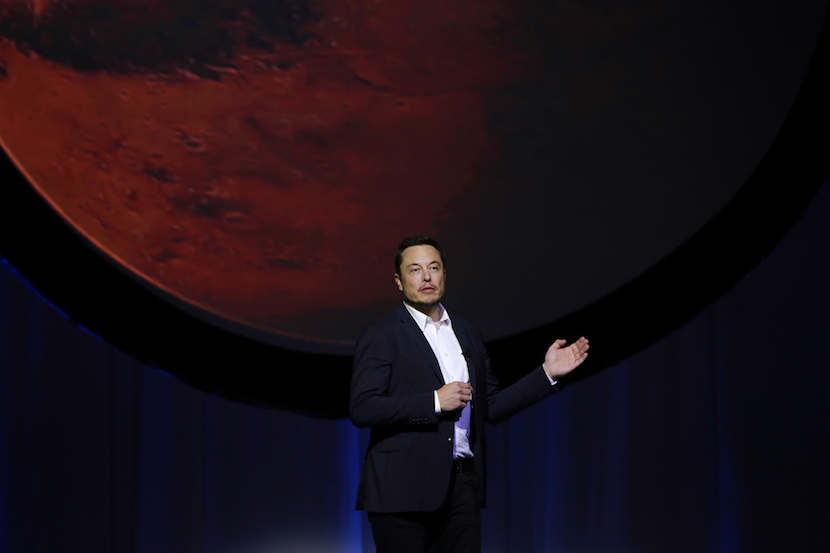 Elon Musk has taken the wrapping off his dream for humans to colonise the planet Mars – ten years ahead of the likely first mission. At a conference in Mexico with fellow space enthusiasts the South African-born super entrepreneur yesterday unpacked his dream in a lengthy and fascinating presentation. Within 12 hours it had been watched online by more than three quarters of a million people. We’ve embedded the video that’s sure to get sci-fi fans saving (and preparing for a potential early visit to the afterlife) – and excite those who worry about mankind hitting earth’s self-destruct button. Musk shares an incredible dream conjured up during the time he pored over books during his formative years in Pretoria. An inspiration to all, an encouragement for us to read more, and some perspective on life’s challenges. Compared with starting a colony on Mars, bringing increasingly polarised South Africa together would seem to be a cakewalk. The nation could make a start by celebrating its incredible exports, irrespective of their melanin, including reclaiming this incredible man who is now revolutionising three entire industries. – Alec Hogg

(Bloomberg) — Entrepreneur Elon Musk laid out a vision of travel to Mars that was heavy on both technology — the how of getting there — and on the dangers that await those first explorers just a decade from now.

“The first journey will be very dangerous, and the risk of fatality will be very high,” Musk said in response to a question during a highly anticipated presentation at the 67th International Astronautical Congress in Guadalajara, Mexico. “Are you prepared to die? Then you are a candidate for going.”

Mars — population zero — offers a way for Earth’s 7 billion-plus humans to ensure the future of the species against possible extinction events, the billionaire founder of Space Exploration Technologies Corp. said. He envisions spacecraft holding 100 or more passengers voyaging to the Red Planet within a decade, if all goes well, at fares that would start at roughly $200,000 and drop toward $100,000 over time. The presentation brought both rounds of applause from the audience, and questions.

“It was very detailed on the spacecraft, but not so detailed when it comes to funding,” said John Holst, a research analyst at the Space Foundation who watched via webcast. “It’s about inspiring others to see that this is possible. But a lot of things have to fall into place for this to happen.”

Musk, who also is chief executive officer of Tesla Motors Inc., said that he was willing to spend his personal assets, valued at roughly $8.6 billion, toward the goal and that public-private partnerships would be needed, without being specific. He stressed that while there are risks, just as there were for explorers and settlers on Earth generations ago, venturing to Mars would be fun for those “with an exploratory spirit.”

“What I really want to try to achieve here is to make Mars seem possible,” Musk said. “One path is we stay on Earth forever, and there will be some eventual extinction event. … The alternative is to become a space-faring civilization and a multiplanet species.”

SpaceX is already making progress in one of the key technologies Musk said is needed to enable travel to Mars: launching payloads into orbit and returning the rockets to Earth for reuse. The company currently flies the Falcon 9 rocket for customers that include commercial satellites and the National Aeronautics and Space Administration.

Musk is no stranger to the risks of space exploration: SpaceX has suffered setbacks including a Sept. 1 fireball that destroyed one of its rockets on the launchpad in Cape Canaveral, Florida; that investigation is ongoing. The Hawthorne, California-based company hasn’t yet set any people into space.

For Mars, Musk envisions an enormous booster rocket with 42 new Raptor engines blasting off from Cape Canaveral, Florida, and launching a spacecraft holding roughly 100 people toward Mars. The spacecraft — which may be called “Heart of Gold,” in a nod to the science fiction book “The Hitchhiker’s Guide to the Galaxy” — will be refueled in orbit before heading to the Red Planet.

The trip could take 80 to 130 days, depending on the positions of Earth and Mars at the time. Factories would be built on Mars to produce fuel for the return trip home.

“The goal of SpaceX really is to build the transport system,” Musk said, drawing a comparison to the first transcontinental railroad in the U.S.

Bill Nye, perhaps best known as pop culture’s “The Science Guy” but also the CEO of the Planetary Society, attended Musk’s speech in person and was struck by the energy of the many students and young professionals in attendance.

“Watching the crowd go absolutely wild today tells me that the best is yet ahead for space exploration,” Nye said in an e-mail. “Elon Musk presented a very aggressive schedule that seemed feasible to the crowd. He thanked NASA for its longtime support of his visions and for buying his rockets. SpaceX has changed how people think about spaceflight.”

Musk, while resolute in his vision of how humans can get to Mars, is less sure about whether he would risk his own life to do so. There are five young sons and a space company that rely on him.

“I’ve got to make sure that if something goes wrong on the flight and I die that there’s a good succession plan and the mission of the company continues and it doesn’t get taken over by investors who just want to maximize the profitability of the company,” Musk said. “I would like to see my kids grow up.”