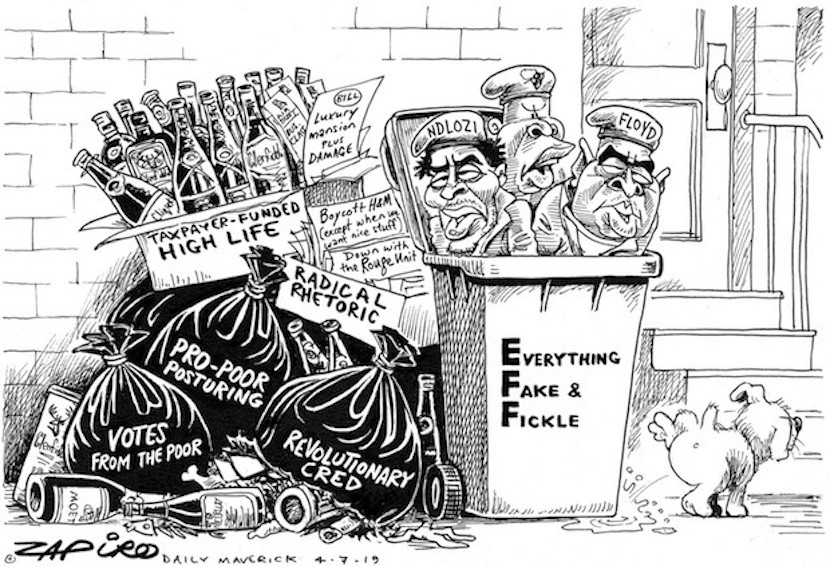 South African investigative journalism queen Marianne Thamm apparently went rummaging through bins to find her scoop on the Economic Freedom Fighters. She produced a fascinating in-depth exploration of the sordid activities of the red berets on a weekend away in Cape Town, based on evidence lurking in black bags. Isabel Oakeshott, a UK political journalist whose work has seen to it that senior politician Chris Huhne was put behind bars for lying about who was speeding in his car, won’t say how she got her hands on the controversial thoughts of US ambassador Sir Kim Darroch – who resigned after it was revealed that he didn’t hold US President Donald Trump in high regard. Both journalists have come in for major criticism for their exposés, with green-eyed monsters across the journalism world wasting no time in attacking these formidable competitors. Simon Lincoln Reader, a South African based in London, points at misogyny and slut-shaming fuelling the hysteria. – Jackie Cameron

Like clockwork, the insufferable, EFF-genuflecting Nickolaus Bauer – famous only for managing to hold a phone in the direction of former President Jacob Zuma in 2017 – emerges to scoff at Marianne Thamm’s investigative journalism because, um, uh, well: “misogyny”. Actually that’s not entirely true – he’s also known for circulating fake news and for a breadth of aspiring wokeness so acute that he sacrificed impartial reporting a while ago choosing instead to present stories through the filter (of his own perceptions) of historical injustice or prejudice.

In the unlikely event Nickolaus grows up and becomes an actual journalist like Marianne, he’ll discover two certainties: i) hypocrisy must always – always – be exposed, irrespective of repetition and ii) only cowards and emos make number 2s on aeroplanes.

Ever since the unforgivable deceit that led to Margaret Thatcher’s resignation, the same garden variety British superiority complex that was complicit in her downfall has sought any opportunity to patronise the United States.

Whilst there is a clear majority of support and solidarity for and with the US in the form of military veterans and businesses (those not in submission to the EU), an elite consisting of career politicians and civil servants, liberal left academics, members of the legal fraternity and high profile media executives have attempted to assert a veiled kind of cultural primacy, something clear in the muttering and shrieking of the failed marches protesting Donald Trump’s visits to England and Scotland in 2018/19.

The latest incident involves leaked diplomatic cables from no less than the United Kingdom’s Ambassador to America, Sir Kim Darroch, featuring a set of slurs about Donald Trump that led to the former’s resignation on Wednesday.

Notwithstanding the fragilities and consequences of leaking sensitive information, this story was a major scoop for my friend Isabel Oakeshott. But because Isabel is on the right – a minority amongst parliamentary reporters – she’s always fair game. And so it was that one John Crace, a journalist for The Guardian, decided it would be a clever idea to criticise Isabel for the story by suggesting that Nigel Farage (a consistent critic of Sir Kim Darroch) had “slipped it under her pillow”, implying that Isabel, who is happily married with children, slept with the leader of the Brexit Party.

The Guardian is edited by a woman who is big into this “you go, girl!” obsession. The newspaper also employs a number of women who seize every opportunity to advocate feminism (at the cost, sometimes, of destroying the world – example – Why I refused to make friends with my vagina | Michele Hanson | Life and style | The Guardian.)

So, bottom line: if you are a woman who deserves equal compensation on the basis of your talent or admirably lobbies for more representation on company boards and in cabinet ministries – but happens to be suspicious of Brussels, or climate hysteria – then, sorry love, but you’re just a slut.

Ed Herbst’s outstanding analysis of the litigious Iqbal Survé refers: I don’t agree with suing, but an exception could be made here – and is, as Isabel has given John and The Guardian until 4pm on Friday to respond with an apology – or be issued with further claims.

For one of the most prominent examples of the establishment sneering at America, we go back to 2004, and, unsurprisingly, The Guardian again. Then, it was the turn of the South African-born editor of the supplement G2, Ian Katz, to have his clever idea: get The Guardian readers to write to residents of Clark County, Ohio, and order them to vote for John Kerry.

I’ve tried to recreate the scene: the effete, middle class, salt’n peppered psychos and harridans of Jeremy Corbyn’s Islington, placing the newspaper with its instructions next to their Tasmin Archer CD collections, pouring themselves a cup of Ethiopian fair trade coffee before sitting down to compose emails to people they have never met and unlikely ever will, inevitably to be interpreted as “you Americans are f stupid you are”.

Recipients did not warm to the imposition. “Sort out your own miserable corner of the world” and “fix your goddamn teeth you filthy animals” were two of the milder responses. Shortly after it began the campaign was canned (probably because the pouncing is so unconscious, it only dawned upon Ian later that this could qualify as political interference). Anyway, he was then freed up to fail elsewhere.

Despite his sometimes extensive efforts to convince us otherwise, James Small was a really good dude, imperfect, troubled, stalked by the self-loathing that accompanies the morning after great achievement. I liked many things about him, but most of all his taste in music; whilst many if not all his sporting acquaintances listen to unspeakable stuff (their choice in books – e.g Lance Armstrong – is even worse), James was unusual, a fan of the generation of South African rock that preceded Springbok Nude Girls, and arguably the greatest celebrity fan of Durban group Arapaho (one of who’s members is today a well regarded and accomplished architect).

There were only ever two kinds of James Small fans: those who bought his CD, and those who didn’t.