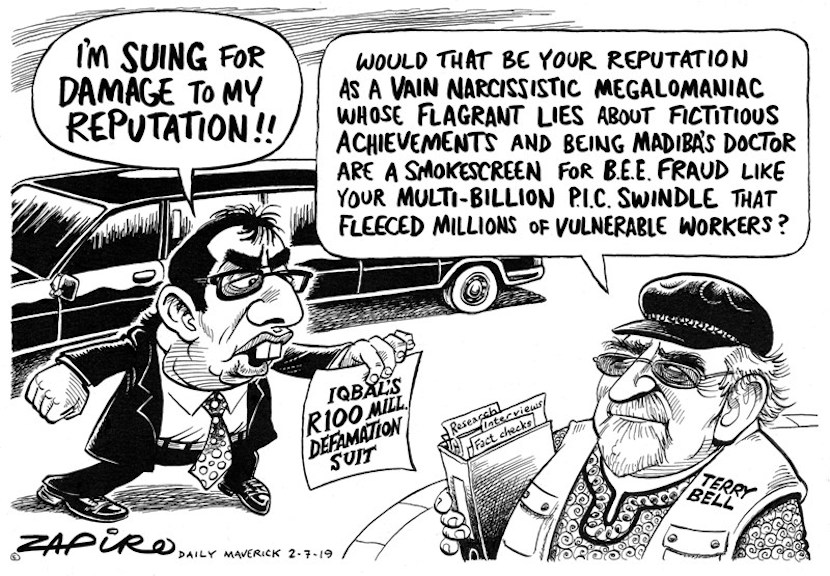 Our veteran contributor Ed Herbst has a knack for slowly raking over the coals of fires started by controversial media entrepreneur Iqbal Survé. And he does so once more in the piece below, triggered by a R100m libel suit that Survé has launched against former activist turned labour journalist Terry Bell. Herbst draws some obvious conclusions. Is Survé’s claim an act of desperation or the right of a good man defamed? You be the judge. – Alec Hogg

I have always valued the principles of transparency, fairness and independence. More importantly, in our quest for fairness, we should give everyone an opportunity of the right of reply. – Iqbal Survé in a letter to staff News 24 12/12/2013

Saying he needed some two months to reply to our queries and wanted sight of the draft of any article, he added: “My biography will provide much insight with detail including documents and photographs and personal stories told by many of the people that I was privileged to positively impact on their lives.” – Fact checking Iqbal Survé’s bold bio leaves more questions Terry Bell 28/6/2016

Last Friday, 28 June, marked the third anniversary of Iqbal Survé’s unfulfilled promise of an autobiography detailing his life as a self-acknowledged business icon and philanthropist.

As yet nothing further has been heard about its publication. But another book about Survé is indeed about to hit the stores. One written by former employees, Alide Dasnois and Chris Whitfield which promises to take a rather different line to what SA’s controversial media owner would prefer.

Cynics reckon the imminent publication of this “tell all” by respected long-time journalists has prompted their subject launch a seemingly bizarre libel suit against labour reporter Terry Bell for R100m.

When Sunday World  published an article about Bonang Matheba being investigated by SARS for tax avoidance, she immediately denounced the article as being devoid of truth and let it be known that as a result of the reputational damage suffered, she was suing the newspaper for R10m.

She then quietly settled with the tax collector and nothing further was heard about her R10m defamation claim.

Much the same happened when Jacob Zuma threatened to sue Zapiro for the 2008 Lady Justice cartoon (below).

Terry Bell’s case number – 11083/19 in the Cape High Court – will be the second occasion when Survé has sued for alleged defamation.

In August 2015 he had papers served on human rights activist Rhoda Kadalie seeking damages of R1m for a letter she had written to the Mail & Guardian which he claimed was injurious to his reputation. That came to nothing.

Here’s the background to the current lawsuit.

In January 2015 Survé withdrew from the UCT positions he held, saying that this was because the university was “paying lip service” to transformation.

Kadalie’s letter to the Mail & Guardian contended that Survé ‘didn’t jump, he was pushed’. After senior counsel representing her told Survé they would contest the matter in court, nothing further was heard.

Kadalie was later vindicated by then Vice-Chancellor of UCT, Dr Max Price, who confirmed her version in an interview with Jonathan Jansen for the latter’s book As by Fire – The end of the South African University, an account buttressed by the research of UCT honours student, Ricky Stoch.

(What is not insignificant is that Carlo Petersen, author of many of the Cape Times articles which attacked UCT and Max Price and supported Fallists like Chumani Maxwele, has joined the exodus from Sekunjalo Independent Media.)

Survé’s court threat comes ahead of his next appearance before the Mpati Commission which is expected to recall him to respond to damning allegations by two of his former employees, Siphiwe Nodwele and Kevin Hardy.

In terms of reputational damage, testimony to the Mpati Commission by two current and senior Sekunjalo employees, Abdul Malick Salie and Naahied Gamieldien, appears to have been far more incriminatory than anything Bell wrote. Unlike Bell, however, the duo are protected by the commission’s decree.

I would argue that the person who has most sullied Survé’s reputation as a man who wants to change the world, is the former political editor of the Cape Times, Dougie Oakes.

In an excoriating article on his website later reproduced on Daily Maverick, Oakes accused Survé of being a narcissist who is running a chaotic newspaper company where publishing Fake News is routine; where white staff are persecuted; and where interns are paid a pittance and exploited.

Oakes believes that the PIC will never get a return on its investment in Sekunjalo Independent Media.

If Survé were to successfully sue Bell and Naspers for R100m, many more prospects await among them: Alide Dasnois and Helen Zille and Max du Preez and Janet Heard and Peter Flack and Stephen Grootes and Joe Thloloe and Ricky Stoch and Sam Sole and Dewald van Rensburg and Ann Crotty and Tim Cohen and Ivo Vegter and Marianne Thamm and Anton Harber and Carol Paton and James Myburgh and Thuli Madonsela and Donwald Pressly and Craig McKune and Bobby Jordan and Chad de Matos and Mark Povey and Zackie Achmat and Ferial Haffajee and Micah Reddy and David Benatar and Chris Whitfield and Michael Mpofu and Dr Julie Reid and Pierre de Vos and Chris Roper and Brendan Seery and Dirk de Vos and Max Price and Jonathan Jansen and Sidney Kaye and Dougie Oakes and Kevin Hardy and Siphiwe Nodwele and Victor Seanie and Tom Eaton and Magda Wierzycka and Mondli Makhanya and Tony Jackman and Warren Thompson and Nathan Geffen and  Martin Welz and  Azad Essa and Tatenda Gwaambuka and Cosatu and Noseweek and R2K and ODAC and SANEF and Zapiro.

So how likely is Survé to successfully dun Terry Bell for R100m?

Now in his late seventies, Bell still writes for a living and drives a 17-year-old diesel bakkie so, in legal terms and in this context he might be described as ‘a man of straw’ or ‘a man without powder and shot’ – the juridical analogy for, metaphorically speaking,  getting blood out of a stone.

Firstly, what are the chances, if this ever reaches court, of Bell being found guilty of defaming Survé?

The main defences against defamation are truth, public interest and provability.

Given the testimony before the Mpati Commission so far, I would venture that the public interest component is substantial as it concerns the quality of life of almost two million government employees and current civil service pensioners in the twilight of their lives. They are all dependent on the Government Employees Pension Fund in this regard.

Furthermore, the evidence provided in Bell’s article is, unlike the AYO valuation, no thumbsuck and the article, Fact checking Iqbal Survé’s bold bio leaves more questions, was the result of two years of research into Survé’s background.

Bell does not, for example, cite anonymous sources in challenging the contention that Survé treated Nelson Mandela as his doctor ‘on and off the island.’ He names individuals and institutions as the sources for the article which Survé – but not Twitter – found offensive.

Among those who emphatically denied that Survé was one of Mandela’s doctors were Mamphela Ramphela, Dr Ingrid le Roux, the Nelson Mandela Foundation and Zelda le Grange.

In fact, there is no mention of Survé in Dr Vejay Ramlakan’s book, Mandela’s Last Years.

In  a chapter headed ‘Medical support’, Ramlakan details in 15 pages the names and CVs of every doctor who, to his knowledge, treated Mandela and everyone on the staff at every hospital where Mandela was treated and at his Houghton and Qunu homes.

The chapter includes the names of everyone on the support staff as well – right down to the nurses and the constables in the security staff. Nowhere does the name Iqbal Survé appear.

Furthermore, when Peter Flack specifically mentioned the name of Iqbal Survé to Nelson Mandela, it was quite clear that Mandela did not know who Survé was.

But even if this aspect of Bell’s article was wrong, he is still protected by the media freedom provisions in Khumalo and Others v Holomisa and National Media Ltd v Bogoshi.

In this regard I would like, as a case study, to cite the damages awarded in a defamation case brought against one Survé’s newspapers, The Daily Voice.

In an article that was clearly defamatory, The Daily Voice falsely accused Inspector Clive Muller, a teetotal policeman with an exemplary career record, of being drunk and disorderly on duty.

The Cape High Court awarded Muller, not the R1m he had asked for but R70,000 and, given judicial precedent, this ruling is not surprising.

In his definitive book on the matter, Defamation and Freedom of Speech, one of SA’s top media lawyers Dario Milo writes: ‘… punitive damages unnecessarily deter public speech with no countervailing benefit to the right of reputation. The award of punitive damages is a disproportionate restriction on freedom of speech.’ – P254

Cynics would argue that its intention is purely to generate maximum publicity in the hope of distracting public attention from Surve’s next appearance before the Mpati Commission and in undermining the impact of the forthcoming book by Alide Dasnois and Chris Whitfield.

There are several details about the court papers served on Bell which are significant:

Another accolade claimed by Survé is that he was given an award in 1989 by Amnesty International as South Africa’s “Struggle doctor”. But Amnesty headquarters in London reports that they have no record of an award being made; that so far as Amnesty is aware, only one South African, Nelson Mandela, was ever presented with an Amnesty award.

Who do we believe?

If this matter ever reaches court, the judge will be asking themselves who is telling the truth.

Do they believe Terry Bell, a man who suffered 90-day detention in the apartheid era and spent 27 years in exile during which time he helped to establish the ANC Youth League. A man who has written several books about that era – see here and here and here – and whose contribution as a labour reporter is hugely admired, including by Patrick Craven of Cosatu?

Or does it believe Survé, whose donation to May’s election was rejected by the African National Congress?

Within four weeks, the Mpati Commission must submit its findings to President Cyril Ramaphosa. In the interim, the question I would like former CEO of the Public Investment Corporation, Dr Dan Matjila, to answer relates to what follows below.

In 2015 James Myburgh of Politicsweb analysed the annual report of the Government Employees Pension Fund. among his key findings is:

…the increase in the reported loan amount between 2013/2014 and 2014/2015 suggests that Independent Media has yet to begin paying down the loan, and compound interest has been accumulating on it.

Survé’s response was that Myburgh was a racist with a right wing agenda. But Myburgh was vindicated by Tito Mboweni’s statement in parliament in November last year, when he revealed Survé had reneged on servicing this loan by due date.

If Matjila knew since 2015 that Survé was not servicing the original R1bn PIC loan which was used to hand him control of the biggest group of English language newspapers in the country, why then did he continue supporting Survé? And, ignoring protocol, also sign the R3bn Sagarmatha deal on 13 December 2017 and, a day sign a R4.3bn injection of State pensioners’ retirement savings into Survé’s AYO?

In the meantime I’ve placed my order with the good folk at Clarke’s Bookshop in Cape Town. And am eagerly anticipating the release of the book on Surve’ by Alide Dasnois and Chris Whitfield.

So too, I am sure, does Terry Bell.