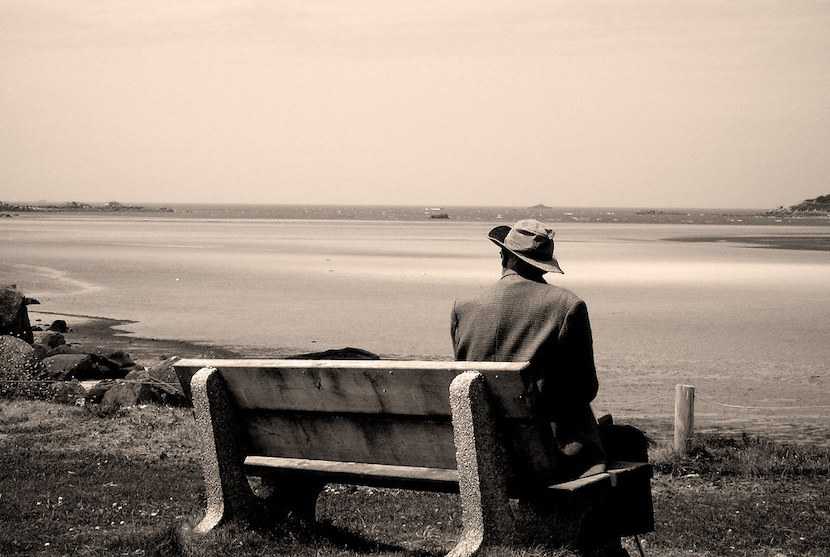 My favourite angling companion can stand wordlessly alongside me on a wild, sandy shore-break or float silently nearby on an alpine lake aboard his trout-hunting kick-boat – for hours on end. We’re being solitary together, often lost in our thoughts or introspection when the fish go off the bite. Words are an intrusion. Taken further, think solo wilderness trips introduced into high school recreational curricula to promote self-awareness and to give kids a felt alternative to the fast-paced, hyper-active digital world. Think also; increasingly popular silent meditative retreats. Learning to be with, and at peace with ourselves are posited here as vital attributes to building our capacity for self-examination. When we fail to do this, all sorts of conforming, unthinking, automatic actions become possible; even mass-murder as evidenced by the lack of imagination and conventionality of Adolf Eichmann cited here. Socrates said the unexamined life was not worth living. There’s an important distinction between choosing to be alone to escape (resulting in loneliness) and choosing solitude to contemplate (leading to greater inner peace). Self-partnering has its upsides, especially if you improve your relationship with yourself; often the font of rich, deep and meaningful companionships with others. Story courtesy of Aeon. – Chris Bateman

Before you can be with others, first learn to be alone

In 1840, Edgar Allan Poe described the ‘mad energy’ of an ageing man who roved the streets of London from dusk till dawn. His excruciating despair could be temporarily relieved only by immersing himself in a tumultuous throng of city-dwellers. ‘He refuses to be alone,’ Poe wrote. He ‘is the type and the genius of deep crime … He is the man of the crowd.’

Like many poets and philosophers through the ages, Poe stressed the significance of solitude. It was ‘such a great misfortune’, he thought, to lose the capacity to be alone with oneself, to get caught up in the crowd, to surrender one’s singularity to mind-numbing conformity. Two decades later, the idea of solitude captured Ralph Waldo Emerson’s imagination in a slightly different way: quoting Pythagoras, he wrote: ‘In the morning, – solitude; … that nature may speak to the imagination, as she does never in company.’ Emerson encouraged the wisest teachers to press upon their pupils the importance of ‘periods and habits of solitude’, habits that made ‘serious and abstracted thought’ possible.

In the 20th century, the idea of solitude formed the centre of Hannah Arendt’s thought. A German-Jewish émigré who fled Nazism and found refuge in the United States, Arendt spent much of her life studying the relationship between the individual and the polis. For her, freedom was tethered to both the private sphere – the vita contemplativa – and the public, political sphere – the vita activa. She understood that freedom entailed more than the human capacity to act spontaneously and creatively in public. It also entailed the capacity to think and to judge in private, where solitude empowers the individual to contemplate her actions and develop her conscience, to escape the cacophony of the crowd – to finally hear herself think.

In 1961, The New Yorker commissioned Arendt to cover the trial of Adolf Eichmann, a Nazi SS officer who helped to orchestrate the Holocaust. How could anyone, she wanted to know, perpetrate such evil? Surely only a wicked sociopath could participate in the Shoah. But Arendt was surprised by Eichmann’s lack of imagination, his consummate conventionality. She argued that while Eichmann’s actions were evil, Eichmann himself – the person – ‘was quite ordinary, commonplace, and neither demonic nor monstrous. There was no sign in him of firm ideological convictions.’ She attributed his immorality – his capacity, even his eagerness, to commit crimes – to his ‘thoughtlessness’. It was his inability to stop and think that permitted Eichmann to participate in mass murder.

Just as Poe suspected that something sinister lurked deep within the man of the crowd, Arendt recognised that: ‘A person who does not know that silent intercourse (in which we examine what we say and what we do) will not mind contradicting himself, and this means he will never be either able or willing to account for what he says or does; nor will he mind committing any crime, since he can count on its being forgotten the next moment.’ Eichmann had shunned Socratic self-reflection. He had failed to return home to himself, to a state of solitude. He had discarded the vita contemplativa, and thus he had failed to embark upon the essential question-and-answering process that would have allowed him to examine the meaning of things, to distinguish between fact and fiction, truth and falsehood, good and evil.

Read also: In praise of being single: the bliss that lies in solitude

‘It is better to suffer wrong than to do wrong,’ Arendt wrote, ‘because you can remain the friend of the sufferer; who would want to be the friend of and have to live together with a murderer? Not even another murderer.’ It is not that unthinking men are monsters, that the sad sleepwalkers of the world would sooner commit murder than face themselves in solitude. What Eichmann showed Arendt was that society could function freely and democratically only if it were made up of individuals engaged in the thinking activity – an activity that required solitude. Arendt believed that ‘living together with others begins with living together with oneself’.

But what if, we might ask, we become lonely in our solitude? Isn’t there some danger that we will become isolated individuals, cut off from the pleasures of friendship? Philosophers have long made a careful, and important, distinction between solitude and loneliness. In The Republic (c380 BCE), Plato proffered a parable in which Socrates celebrates the solitary philosopher. In the allegory of the cave, the philosopher escapes from the darkness of an underground den – and from the company of other humans – into the sunlight of contemplative thought. Alone but not lonely, the philosopher becomes attuned to her inner self and the world. In solitude, the soundless dialogue ‘which the soul holds with herself’ finally becomes audible.

Echoing Plato, Arendt observed: ‘Thinking, existentially speaking, is a solitary but not a lonely business; solitude is that human situation in which I keep myself company. Loneliness comes about … when I am one and without company’ but desire it and cannot find it. In solitude, Arendt never longed for companionship or craved camaraderie because she was never truly alone. Her inner self was a friend with whom she could carry on a conversation, that silent voice who posed the vital Socratic question: ‘What do you mean when you say …?’ The self, Arendt declared, ‘is the only one from whom you can never get away – except by ceasing to think.’

Arendt’s warning is well worth remembering in our own time. In our hyper-connected world, a world in which we can communicate constantly and instantly over the internet, we rarely remember to carve out spaces for solitary contemplation. We check our email hundreds of times per day; we shoot off thousands of text messages per month; we obsessively thumb through Twitter, Facebook and Instagram, aching to connect at all hours with close and casual acquaintances alike. We search for friends of friends, ex-lovers, people we barely know, people we have no business knowing. We crave constant companionship.

But, Arendt reminds us, if we lose our capacity for solitude, our ability to be alone with ourselves, then we lose our very ability to think. We risk getting caught up in the crowd. We risk being ‘swept away’, as she put it, ‘by what everybody else does and believes in’ – no longer able, in the cage of thoughtless conformity, to distinguish ‘right from wrong, beautiful from ugly’. Solitude is not only a state of mind essential to the development of an individual’s consciousness – and conscience – but also a practice that prepares one for participation in social and political life. Before we can keep company with others, we must learn to keep company with ourselves.