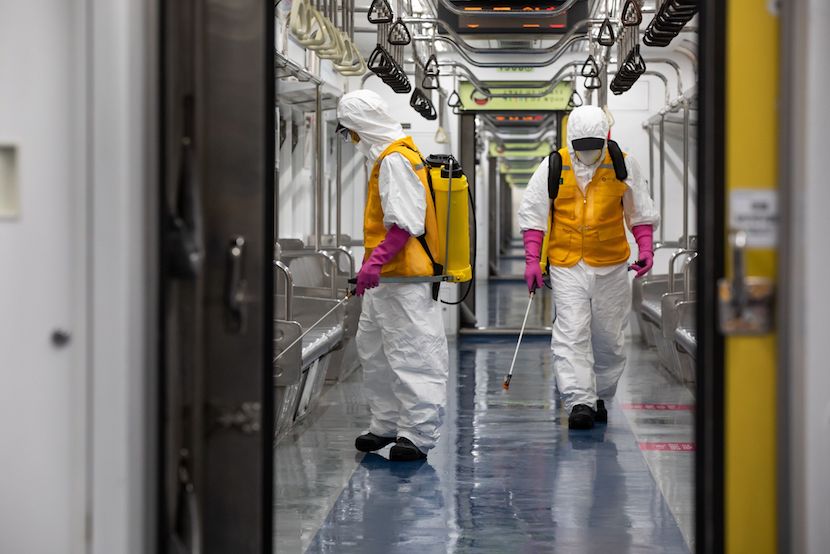 South Africa has 71 confirmed cases of coronavirus and more are under investigation. The government has among others imposed travel bans and shut down schools to combat the spread of the coronavirus in the country. The ban on foreign nationals from Italy, Iran, South Korea, Spain, Germany, the US, UK and China are effective immediately, while 35 of South Africa’s land ports will be shut down today. Two of the seaports will also be closed for passengers and crew changes. Gatherings of more than 100 people are prohibited, and all mass gatherings must be cancelled. President Cyril Ramaphosa said his government will soon announce fiscal and other measures to mitigate the effect of the coronavirus on the economy. Interestingly, the South Korean government has embarked on an aggressive coronavirus testing programme from which South Africa can certainly extract many lessons. – Stanley Karombo

Imagine coming from work and finding a poster stuck on your door which reads: “We’d like you to get tested for coronavirus,” with the Johannesburg City Council’s health department urging you to get examined for free within the next 48 hours.

This is precisely what is happening in South Korea, where the government has aggressively embarked on a coronavirus testing programme. The country has tested approximately one out of every 200 citizens under a screening policy credited with checking the outbreak.

Quoting health experts in The Wall Street Journal on 16 March, Dasl Yoon and Timothy Martin say South Korea’s aggressive screening policy is a major reason for virus infections in the country levelling off at around 8,000. That success has made South Korea an early model for countries like South Africa, facing an early onset of the virus.

According to WSJ, South Korea has examined more than a quarter-million people through Monday. It is far more than the test tallies seen in the US and Europe.

South Kore, a country known for its single-payer healthcare system and sweeping infectious-disease law has brought in the aggressive test approach with few restrictions, notes WSJ. Tests are administered at no cost when doctors recommend an individual to get examined, or if investigators unearth a potential link to a confirmed case.

The government approved its first test kit made by Seoul-based Kogene Biotech on February 4, when the country had reported just 16 cases. Distribution of the test kits started three days later, according to WSJ.

With three other suppliers winning fast-track rights to start production after a 10-day review prepared South Korea for the worst when in the span of two weeks the case count exploded from 31 on February 18 to nearly 5,000.

South Korea now has the ability to test up to 20,000 people a day at 633 testing sites nationwide, including drive-through clinics and pop-up facilities parked in front of newly infected buildings, health officials say. Samples get transported by van – where they are stored at about 40-degrees Fahrenheit in airtight containers – to 118 laboratories. An army of around 1,200 medical professionals analyse results.

South Korea’s testing efficiency is in stark contrast to the slow rollout in the US and Europe. Anthony Fauci, director of the US National Institute of Allergy and Infectious Diseases, told WSJ the current system wasn’t equipped for everyone to be easily tested and is “failing”.

Experts say the absence of such patient testing leaves officials with little direction over where the virus may go next and cloaks the magnitude of the virus’s spread.

“The testing is really important. If you can isolate these people early on, it’s easier to contain the problem,” Yvonne Maldonado, a professor at Stanford University’s School of Medicine and an infectious-disease physician, told WSJ.

The government’s official statistics indicate that about 3% of South Koreans tested for the coronavirus resulted in confirmed cases, while in Italy more than one in six tested were infected. Following its slow response to the Middle East respiratory syndrome (MERS) and the high test count, the South Korean government gave itself broad powers to stem any outbreak. This include having access to credit-card transactions, smartphone data and security-camera footage, which provides a snapshot of a confirmed patient’s whereabouts – and a broad picture of the potentially affected people.

Seoul’s government gives two daily briefings. And as reported by WSJ, citizens get text alerts when nearby infections emerge – even potential ones still under investigation.

Doctors can currently prescribe a test to those who show signs of a fever or respiratory symptoms after visiting 11 affected countries – among them China and Italy – or pneumonia of unknown cause, according to the Korea Centres for Disease Control and Prevention.