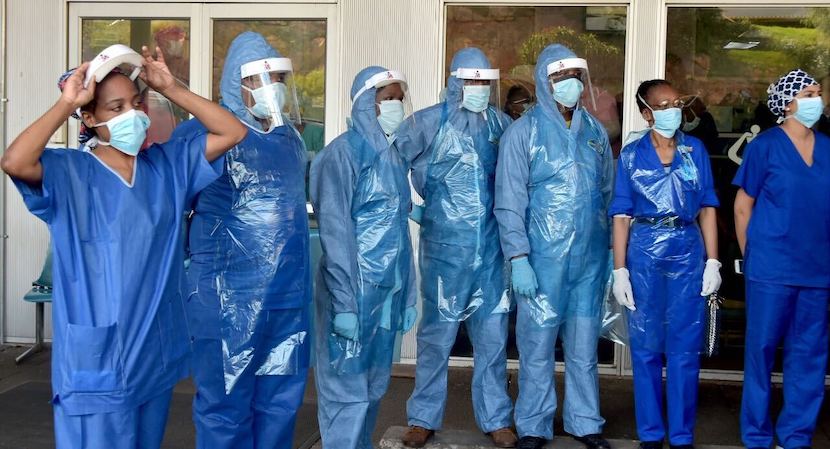 President Cyril Ramaphosa has asked South Africans to keep their guard up and wear their masks as Covid-19 cases are overwhelming the nation’s healthcare system. In a stern and heartfelt address, Ramaphosa told the nation that complacency has lead to the spike in infections and the subsequent lockdown which is in force until mid January. He reminded people that  Covid-19 takes advantage of our over-confidence and that individuals are responsible for following guidelines and keeping vulnerable people safe. “Wearing a mask is not about your personal choice or your own appetite for risk. Instead, it is about protecting others,” he said.- Melani Mathan

With the rising numbers of COVID-19 cases and the increase in trauma cases, South Africa’s hospitals are almost full to capacity.

“Our hospitals, both private and public, are already close to full capacity in a number of provinces, and ICU beds are either full already or rapidly filling up,” said President Cyril Ramaphosa.

South Africa has breached the one million mark of confirmed Covid-19 cases after 9 502 cases were reported on Sunday, with the cumulative total at 1,011,871 cases.

“According to the data we have, with every relaxation of the restrictions on the sale of alcohol, the number of trauma cases reporting at our hospitals has increased.

“These trauma cases are putting an unnecessary strain on our already stretched public health facilities,” the President said. He was addressing the nation on Monday, on developments in relation to the country’s response to the Coronavirus pandemic. The address follows a meeting on Sunday of the National Coronavirus Command Council (NCCC) and Monday’s special sessions of the President’s Coordinating Council (PCC) and Cabinet.

“In the Eastern Cape, for example, the number of hospitalisations and in-hospital deaths has now surpassed the numbers witnessed in the first surge earlier this year. “Several provinces are hard at work to prepare additional beds, ventilators and oxygen to respond to this increase,” the President said. He said frontline healthcare workers, who have put their lives on the line over the past nine months to care for the ill, are becoming infected in higher numbers.

“They are exhausted, and they are struggling under the strain of the second wave. During the month of December, 4 630 public sector health employees contracted COVID-19, bringing the total number infected since the start of the pandemic to over 41 000,” President Ramaphosa said. He described the frontline healthcare workers as brave men and women, who have kept hospitals and clinics open and running through their resilience, courage and professionalism.

“… [They] are now at even greater risk than before. They are themselves almost at break point.

“They could lose their lives. More families will mourn. All because of our actions, and our failure to take responsibility,” he said.

The President has attributed the rapid rise in infections to so-called super-spreader events, including like end-of-year functions, family and social gatherings, and music and cultural events. “This is a cause for great alarm, and points to an extreme lack of vigilance over the holiday period. We have let down our guard, and unfortunately, we are now paying the price.

“We have not been wearing masks. We are not washing our hands or sanitising, and we are not keeping a safe distance from others. We have continued to host and attend social gatherings and events that in many cases flout public health regulations,” the President said.

He said venues are often poorly ventilated and their permitted capacity is being exceeded. Hand sanitisers are not being used, and masks are being worn to gain entry, only to be taken off once inside. “In these same social gatherings, the consumption of alcohol in restaurants, in nightclubs and taverns has contributed to risky behaviour like not wearing masks and not observing social distancing,” the President said.

In an effort to curb the spread of Covid-19, the President announced that the country will be on an adjusted level 3 from level 1 with immediate effect.

“Unless we act now and unless we act decisively, the number of new infections will far exceed what we experienced during the first wave and thousands more people will lose their lives,” President Ramaphosa said.

The President reiterated his call for South Africans to adhere to COVID-19 health protocols such as wearing masks, washing or sanitising hands, and keeping a safe distance from others. “We must remember that this virus is carried through the air, and that we must therefore avoid what has been described as the three Cs – closed spaces, crowded places and close contact with others. “If we all rigorously adhere to basic precautions, we will see an immediate decline in infections and hospital admissions,” he said.

“Let us each light a candle in memory of those who have lost their lives, in tribute to those on the frontline who are working tirelessly to protect us from harm, in appreciation of the great sacrifices that have been made this past year, and in the confidence that the year ahead will bring health, peace and hope to our people,” the President said.

President Ramaphosa will light a candle in Cape Town at exactly midnight on New Year’s Eve in memory of those who have lost their lives and in tribute to those who are on the frontline working to save lives.

“I ask that you join me wherever you are in this very important symbolic gesture. Let us continue to work as one nation, united and determined,” the President said.