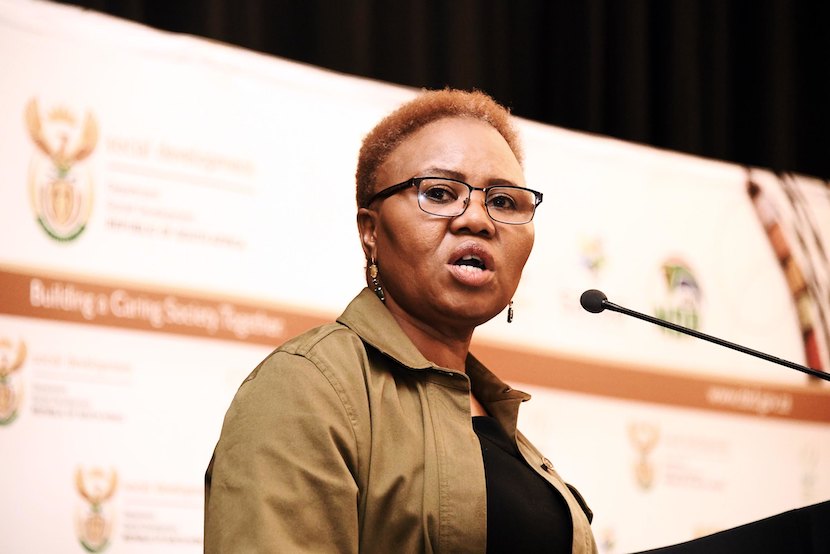 During the Covid-19 pandemic, the disparity between the wealthy and the poor has become even more evident, with marginalised communities being left behind in the fight against Covid-19. People relying on South Africa’s social grant system are among the most vulnerable in our society. When grant recipients arrived at a SASSA office in Bellville in the Western Cape to renew their temporary disability grants, long queues formed outside the office. The queues and long waiting times were already enough of a concern to prompt a visit from Social Development Minister Lindiwe Zulu. While the minister was at the branch, people waiting to be assisted apparently failed to follow social distancing protocols. After beneficiaries failed to respond to requests by the minister to form an orderly line, The South African Police Service used water cannons to force the elderly, ill and physically challenged into lines. GroundUp tells the story of how desperate beneficiaries struggle in the SASSA grant crisis. – Melani Nathan

More than 200,000 grants, which had been extended for six months, lapsed on 31 December and beneficiaries have been queuing outside SASSA offices to renew them.

On Friday, about 400 people were outside the SASSA office in Bellville, Cape Town to renew their temporary disability grants. At the same time, Social Development Minister Lindiwe Zulu was doing a spot visit to the branch to address challenges of overcrowding outside the facility as well as extremely long waiting times for beneficiaries with various illnesses.

When we arrived, black plastic chairs were lined out near the entrance for those in wheelchairs or using crutches. Scores of people were already queueing, while others were waiting around the front of the building.

By midday, tension grew when Zulu, over a loud hailer, asked the crowd to social distance and stand in a line. The police again asked the group to move and when no one responded they used a water cannon to get people off the street and into a snaking line around the building.

Many of the people told us that they had slept outside the SASSA office and were desperate to renew their grants.

Nearly an hour after the crowd was doused by the water cannon, Zulu told journalists inside that SASSA “should have been able to plan better” for the grants which lapsed this month.

“Nobody would ever want to use water cannons just for the sake of it. The bottom line is that the situation was really getting out of hand and people were refusing to social distance and queue,” she said.

Zulu said that the police had made the decision to use the water cannon.

Abeeda Radyn, 50, from Elsies River, was drenched. She said she had been outside the SASSA offices since about 11pm on Thursday night.

Seated on a tiny camp chair, Radyn has arthritis. “All I did was put on my hoodie when they started spraying because unlike the others, I couldn’t just get up and run away,” she said.

This is the third week Radyn has returned to SASSA to try and renew her grant or get an appointment to return. “I need that grant because it puts the food on my table. It is what helps my children get through school,” said Radyn.

Zulu was confronted by a man who told her that there wouldn’t be large crowds and congestion had the government further extended the grant.

The Black Sash’s national advocacy manager Hoodah Abrahams-Fayker condemned the use of a water cannon against vulnerable people. “They’ve created the problem,” said Abrahams-Fayker. “People who have disabilities are vulnerable to the virus in the first place, and even more so during this second wave of the pandemic.”

Abrahams-Fayker said that the Department of Social Development and SASSA should not have turned to the police. Instead they should take responsibility for putting systems in place to streamline services related to grants.

The Black Sash has called on SASSA to extend temporary disability grants to the end of March 2021. SASSA says it cannot afford to extend the grants but the Black Sash disputes this.

“I understand the suggestion from Black Sash, and we normally work together with them on a continuous basis, and we need to engage more and help each other to find solutions,” said SASSA CEO Totsie Memela-Khambula.

In a statement on Friday, Winde and Fernandez demanded that Ramaphosa intervene.

Fernandez said the situation at SASSA local offices in the province was unacceptable. “SASSA originally agreed to do a follow-up meeting with our Department on Friday, 15 January to discuss solutions to address the challenges. However, this meeting was postponed by SASSA to Monday, 18 January,” she said

“It is deeply concerning that SASSA would rather prioritise conducting visits to local offices instead of using this limited time to discuss and find plans for this crisis,” the statement read.

The police did not respond to questions by the time of publication.