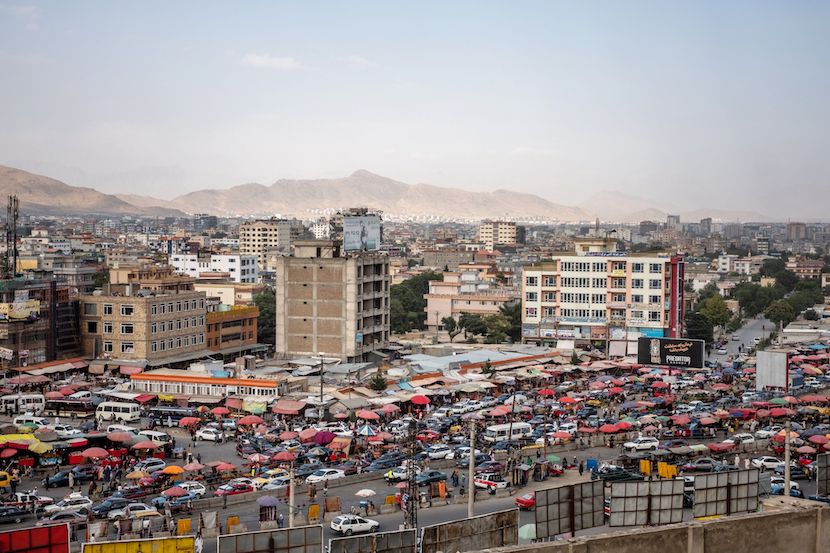 After nearly two decades in Afghanistan, US troops left the country a minute before the August 31st deadline set by President Joe Biden. This, reports The Wall Street Journal, marks the “formal end of the longest war in US history”. However, more than 100 Americans – and thousands of Afghan allies – have been left behind, facing potential danger under Taliban rule. The United States has said that it was working on assisting the Americans still left behind. “Advocacy groups said as many as 60,000 Afghan interpreters, drivers and others who assisted the US military, CIA and US diplomatic personnel over the years, along with their families, remain in the country, at risk of retribution from the Taliban.” – Jarryd Neves

U.S. forces withdraw, leaving behind more than 100 Americans and tens of thousands of America’s Afghan allies

By Nancy A. Youssef and Gordon Lubold of The Wall Street Journal

WASHINGTON—A U.S. military C-17 carried the last American troops out of Afghanistan on Monday, marking the formal end of the longest war in U.S. history but leaving between 100 and 200 Americans and tens of thousands of America’s Afghan allies to face a future of uncertainty and danger.

The final U.S. withdrawal came one minute before the Aug. 31 deadline set by President Biden, an exit under the persistent threat of terrorist attacks that already had claimed the lives of 13 American service members and more than 200 Afghans, who were killed in a suspected Islamic State suicide bombing at the Kabul airport on Thursday.

Despite assurances to the contrary by Mr. Biden and other top administration officials, Americans and Afghan allies were left behind, though the State Department couldn’t provide precise figures.

The U.S. earlier Monday said it was working to assist hundreds of Americans still there. Advocacy groups said as many as 60,000 Afghan interpreters, drivers and others who assisted the U.S. military, CIA and U.S. diplomatic personnel over the years, along with their families, remain in the country, at risk of retribution from the Taliban.

“Tonight’s withdrawal signifies both the end of the military component of the evacuation but also the end of the nearly 20-year mission that began in Afghanistan shortly after Sept. 11, 2001,” Gen. McKenzie said.

He added: “There is a lot of heartbreak associated with this departure. We did not get everybody out that we wanted to get out.”

Gunfire erupted in Kabul after the last U.S. aircraft departed the city’s airport, as Taliban fighters unloaded volleys into the air to celebrate the moment when the last foreign soldier departed Afghanistan’s soil.

The Taliban spokesman, Zabiullah Mujahid, urged the Afghan capital’s residents not to be alarmed by the firing, which he described as the sound of joy. “Our country has gained its full independence, praise be to Allah,” he tweeted.

Some other Afghans were in a less celebratory mood. “It’s frightening that there won’t be any U.S. troops in Kabul,” said Habib, a 33-year-old resident. The Wall Street Journal agreed to identify him only by his first name.

The Taliban, the U.S.’s persistent enemy during the war, continued to coordinate with the U.S. military on the ground at the airport until the very end, Gen. McKenzie said. The top military commander of the 82nd Airborne Division, Maj. Gen. C.D. Donahue, spoke with Taliban commanders just before the last forces left the airport, Gen. McKenzie said. He described the U.S.-Taliban relationship during the withdrawal process “very pragmatic and businesslike.”

Gen. Donahue, along with the top U.S. diplomat in Afghanistan, Ross Wilson, were among those on the final flight, Gen. McKenzie said.

As the Americans departed Afghanistan, the military flew a number of B-52 bombers, MQ-9 Reaper drones, AC-130 gunships and F-15 jet fighters overhead to guard against any possible attack. “We were closely watching,” the official said.

President George W. Bush launched what he called the first war of the 21st century to overthrow the Taliban, who had harbored the al Qaeda terrorists who planned and executed the Sept. 11, 2001, terrorist attacks. The war continued through the presidencies of Barack Obama and Donald Trump, who both tried but failed to end it.

For Mr. Biden, the end of U.S. involvement in Afghanistan was a principal 2020 campaign promise and a position widely supported by American voters who long ago had tired of the war. But the chaotic withdrawal triggered the biggest foreign-policy crisis of Mr. Biden’s young presidency and prompted criticism of his decision to withdraw as well as the planning and execution of the operation.

Mr. Biden in a statement Monday afternoon said he would address the withdrawal Tuesday afternoon.

“I want to thank our commanders and the men and women serving under them for their execution of the dangerous retrograde from Afghanistan as scheduled—in the early morning hours of August 31st, Kabul time—with no further loss of American lives,” Mr. Biden said in a statement.

Mr. Trump reached an agreement last year with the Taliban to withdraw U.S. forces by May 1, 2021, leaving an outline that Mr. Biden has said he felt he had to pursue.

Pentagon officials said Monday that the last cargo flights lifted out the thousands of U.S. troops deployed to the airport in Kabul to conduct an emergency airlift of the U.S. Embassy staff and thousands of Afghans, a task comparable to the evacuation of Saigon in 1975.

The last remaining U.S. diplomats in Kabul also left Monday, according to two U.S. officials, flying to Kuwait briefly before making their way back to the U.S. Most embassy staffers, who had been stationed at the airport in Kabul for more than two weeks, departed the country on Saturday and arrived back in the U.S. on Sunday, after a short stop in Qatar, one of the officials said.

Their departure marked the end of the U.S. diplomatic mission in Afghanistan, contravening months of assurances from the White House and State Department that the U.S. would maintain a diplomatic presence in Afghanistan after the military withdrawal.

Mr. Blinken said the U.S. could work with the Taliban if the group lives up to commitments it has made on allowing freedom of movement, women’s rights and counterterrorism, among other things. He said the U.S. would continue to provide humanitarian aid to Afghanistan, although funds would flow through the United Nations and aid groups, rather than the new government in Kabul.

He also said that Turkey and Qatar were working to facilitate the reopening of Kabul airport, and that charter flights could operate once it was up and running.

The United Nations Security Council called Monday for steps by the Taliban to allow Afghan citizens and other nationals to exit from the country and prevent the use of the country by terrorists.

Russia and China abstained from the vote, objecting to the hasty drafting of the resolution and other details.

The military said it disabled or destroyed military equipment left at the airport, including about 70 mine-resistant vehicles, 27 Humvees and 73 aircraft. “We demilitarized those systems so that they’ll never be used again” Gen. McKenzie said.

In some cases, personnel drained oil and transmission fluid from vehicles or aircraft and ran their engines until they seized up, rendering them useless, an official said. On others, electronic systems were smashed, the official said.

Minutes after the U.S. left, Taliban forces entered the compound and began surveying what was left behind, witnesses said.

Travel to and from Kabul is likely to become more difficult. The Federal Aviation Administration said on Monday that the airport was now without air-traffic control and civilian aircraft were barred from landing in Afghanistan without prior approval.

Although it was the longest military conflict in U.S. history, Afghanistan frequently was a forgotten war, overshadowed by the U.S. invasion of Iraq in 2003 and the subsequent rise of the Islamic State extremist group.

In all, 2,461 U.S. troops were killed, including 13 in the past week, in a U.S. campaign that began Oct. 7, 2001, as an effort to topple the Taliban for harboring al Qaeda. The toll was far greater for Afghans: As many as 69,000 troops and police, and an estimated 47,000 civilians, according to researchers from Brown University’s Costs of War project.

At the war’s peak, in 2010, the U.S. had more than 100,000 troops in Afghanistan. The following year, the U.S. killed al Qaeda leader Osama bin Laden, who had been living in Abbottabad, Pakistan.

Through the years, U.S. forces—backed by other agencies, contractors and nongovernmental organizations—worked to build a democratic Afghan state defended by a 300,000-plus strong security force. But that government and those forces dissipated less than four months after the U.S. began its May withdrawal, enabling the Taliban to return to power.

The fact that Afghanistan fell within weeks to the very group the U.S. unseated represented a crushing defeat to many veterans and officials after a fight that spanned generations.

By U.S. government spending estimates, the war cost taxpayers $824.9 billion or, on average, $3.4 billion a month. Scholars such as those at Brown’s Costs of War project estimate that the war’s total costs, like caring for more than 20,000 injured veterans, have already risen into the trillions.

The military evacuation began in earnest after the collapse of the Afghan government and its security forces Aug. 15. U.S. commanders coordinated with Taliban commanders to secure the airport perimeter and control access after the initial days were marred by scenes of people mobbing the airport and clinging to departing aircraft, some falling to their deaths.

The airlift effort was nearly unprecedented in scale, scope and danger, moving more than 122,000 Americans, third-country citizens and Afghans in 15 days.

The evacuation also was one of its most deadly operations of the war for the U.S. military. On Thursday, 11 Marines, a soldier and a sailor were killed along with nearly 200 Afghans after a suicide bomber detonated himself, as troops were screening thousands of Afghans trying to get a flight out of the country. It was the deadliest day of the last decade for the U.S. military in Afghanistan.

The threat of attacks lasted until the final hours of the U.S. withdrawal. The U.S. military said five rockets were fired at the airport Sunday evening. One of the rockets was intercepted by counter-missile weapons, while three landed outside the airport and another landed inside, though without causing any casualties.

Earlier that day, the Pentagon said it hit a vehicle aiming for the airport and laden with explosives. The U.S. military said it killed several suicide bombers inside the car, but many Afghans on the ground said the strike killed 10 civilians, including several children.

Recent polls have shown majorities of Americans approve of the decision to withdraw but disapprove of Mr. Biden’s handling of the exit.

An ABC News/Ipsos poll conducted Aug. 27-28, after the suicide bombing, found 59% of adults disapproved of Mr. Biden’s handling of Afghanistan while 38% approved—down from 55% who approved in a late July poll.

Biden administration officials had intended to spend the month of August touting Mr. Biden’s accomplishments and building support for the bipartisan infrastructure package and the proposed $3.5 trillion budget plan. But the chaotic exit has overshadowed the president’s legislative agenda.

Democrats believe that priorities for voters will shift ahead of next year’s midterm elections, with issues like Covid-19 and the economy remaining a priority in their minds and frustrations with the Afghanistan exit dissipating over time. The party holds a narrow majority in the House and controls the evenly divided Senate.

Lawmakers from both parties have called for hearings on Capitol Hill once the withdrawal is complete. Republicans are pushing for those hearings to happen as soon as possible once Congress returns in mid-September.