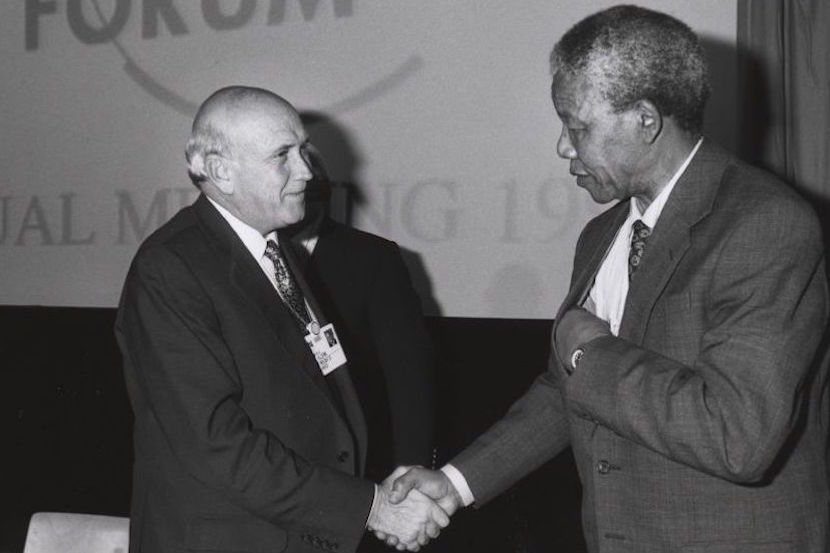 Former South African President FW de Klerk passed away yesterday at his home in Fresnaye, Cape Town. He was 85. Earlier this year, the FW de Klerk Foundation announced the octogenarian had been diagnosed with a rare form of cancer, mesothelioma, which affects the lining of the lungs. In a statement from President Cyril Ramaphosa, the current leader of the country remarked that De Klerk “took the courageous decision to unban political parties, release political prisoners and enter into negotiations with the liberation movement amid severe pressure to the contrary from many in his political constituency.” The NP leader first took the reins of the country in 1989, serving until 1994 when South Africa’s first black president, Nelson Mandela, was elected. While in power, de Klerk ordered the unconditional release of Mandela from his prison sentence. Working together with Mandela and various political parties, de Klerk was instrumental in the undoing of apartheid, an oppressive regime that discriminated on race. While many have their doubts about the late former president’s legacy, he expressed his final apologies in what is being called his “final message”. Released by the FW de Klerk Foundation, the former president apologises for his role in the apartheid regime. “I, without qualification, apologise for the pain, the hurt, indignity and the damage that apartheid has done to black, brown and Indians in South Africa. I do so not only in my capacity as the former leader of the National Party, but also as an individual. Allow me in this last message to share with you, that since the 80’s my views changed completely. It was as if I had a conversion. In my heart of hearts, [I] realised that apartheid was wrong.” – Jarryd Neves

By Jackie Bischof of The Wall Street Journal

Mr. de Klerk died in his home in Cape Town, the FW de Klerk Foundation said in a statement. In March, the foundation said that the former president had been diagnosed with mesothelioma, a cancer that affects the lining of the lungs.

Mr. de Klerk, who served as president of South Africa from 1989 to 1994, is credited with convincing members of his government that apartheid was no longer a viable government policy. In his first opening speech to Parliament in February 1990, he lifted a ban on opposition parties and announced the release of political prisoners, including Mr. Mandela. Talks began between his Afrikaner-led government and opposition parties, including Mr. Mandela’s African National Congress.

“The season of violence is over,” he said at the time. “The time for reconstruction and reconciliation has arrived.”

Mr. de Klerk’s conversion came late in his political career. He had supported apartheid’s “separate development” policies, even advocating racial segregation in universities during his time as minister of education. Mr. Mandela had also expressed frustration at times with Mr. de Klerk and with his government’s failure to protect Blacks protesting apartheid.

But Mr. Mandela, in his autobiography “A Long Walk to Freedom,” described Mr. de Klerk as “not an ideologue but a pragmatist, a man who saw change as necessary and inevitable.”

South Africa’s white-led government faced a grim situation when Mr. de Klerk came to power in 1989. The nation was nearly broke after years of international sanctions. Antiapartheid protests were roiling the country. Some observers were predicting an imminent war between the races.

After Mr. Mandela’s release from prison, the two men worked together. They ensured that peaceful democratic elections took place, oversaw the drafting of a transitional constitution and teamed up in government. In 1993, they were jointly awarded the Nobel Peace Prize. Mr. de Klerk served as deputy president to Mr. Mandela after his election as president in 1994.

“Although I would not take back my criticisms, I would say that he had made a genuine and indispensable contribution to the peace process,” Mr. Mandela wrote. He later went on to say in a speech at Mr. de Klerk’s 70th birthday party in Cape Town that he was proud to have shared some of South Africa’s most important historical moments with him.

Mr. de Klerk was born March 18, 1936, in Johannesburg, the son of a local politician. He qualified as a lawyer in 1958 and practiced law in the small town of Vereeniging before becoming a member of the National Party in 1972. His older brother Willem de Klerk went on to become a liberal politician and journalist.

Like many Afrikaans youth at the time, Mr. de Klerk was raised as an Afrikaner nationalist. At the core of this nationalist ideology was a belief that Afrikaners, who descended from Dutch colonialists in South Africa, were separate from and superior to the indigenous people of South Africa. When the Afrikaner-led National Party came to power in 1948, ending years of British colonialism, this belief shaped the system of racial segregation that became known as apartheid.

Unlike some of his political peers, Mr. de Klerk later apologized publicly for apartheid. “I hope that the victims of our policies will find it in their hearts to forgive us—not only to relieve us of the burden of responsibility that we must carry—but to free themselves finally from the oppression of the past,” he said in a September 1997 speech at Coventry Cathedral in England.

After a swift political rise, Mr. de Klerk was elected as leader of the National Party, and succeeded P.W. Botha as president. Mr. de Klerk soon began negotiations with other political parties over a peaceful end to apartheid, resulting in the first elections in which all South Africans—regardless of color—could vote.

In 2010, two decades after this first step toward multiracial democracy, Mr. de Klerk recalled that conditions may not have again been so favorable for a peaceful settlement to South Africa’s problems. “When history opens a window of opportunity it is important to jump through it,” he said.

Mr. de Klerk withdrew the National Party from the transitional government in 1996 to protest its declining influence within the government and differences over a number of policy issues.

Mr. de Klerk became the subject of several tabloid stories and caused outrage in the conservative Afrikaner community when he married his mistress Elita Giorgiades in 1998, a week after divorcing Marike de Klerk, his wife of 39 years.

In 2001, Marike de Klerk was murdered by a former security guard in her Cape Town apartment. He is survived by his second wife, Elita, his children Jan and Susan and his grandchildren. His other son, Willem, died of cancer last year.

For the most part, Mr. de Klerk stayed out of politics, only occasionally commenting on issues through his various foundations. He was proud of the country’s progress since the 1994 elections, but cautioned that hard work would be required to maintain South Africa’s democracy.

“Perhaps the main lesson that we have learned from our democratic transition is that the process never ends,” he said in a 2011 speech in Oslo. “It is not possible to rest on one’s laurels and imagine that one has ever solved all one’s problems.”

Appeared in the November 12, 2021, print edition as ‘Former President Ushered Out Apartheid.’