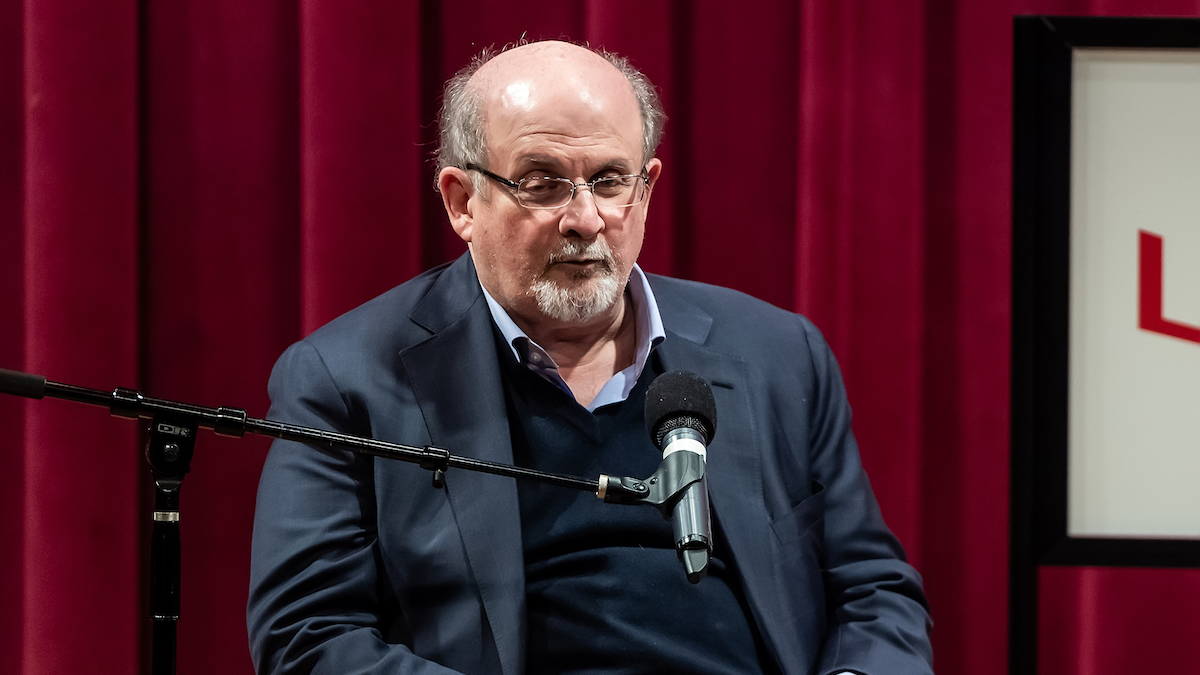 The attack on renowned Indian writer Salman Rushdie while lecturing in New York took place less than a week after a story about him appeared on the Iranian government’s official news website. The website said the fatwa was “an unforgettable verdict for Muslims in the world.” Current Iranian Supreme Leader, Ayatollah Ali Khamenei, said the death sentence issued by Supreme Leader Ayatollah Ruhollah Khomeini in 1989 demanding Rushdie’s death after the publication of “The Satanic Verses” is still valid – but denied any blame for the attack. In fact, Iran blamed Rushdie. Kanaani said concepts promoted by the US, such as freedom of speech, “cannot justify insulting divine religions and their sacred beliefs.” Story courtesy of The Wall Street Journal. – Sandra Laurence

In its first public comments on author’s stabbing, Tehran said no one had the right to accuse Iran over the incident

TEHRAN—Iran denied involvement in the attack on Salman Rushdie on Monday, saying the acclaimed novelist was to blame for the stabbing that left him hospitalized more than three decades after he was targeted by Iran’s then leader for his work

In its first public comments since Mr. Rushdie was stabbed on stage at a New York event on Friday, Tehran said no one had the right to accuse Iran in relation to the assault.

“We, in the incident of the attack on Salman Rushdie in the U.S., do not consider that anyone deserves blame and accusations except him and his supporters,” said Nasser Kanaani, spokesman for Iran’s Foreign Ministry.

“Iranian state institutions have incited violence against Rushdie for generations, and state-affiliated media recently gloated about the attempt on his life,” Mr. Blinken said. “This is despicable.

Mr. Rushdie, 75, was stabbed multiple times before a planned lecture in southwestern New York at the Chautauqua Institution. The suspected attacker, Hadi Matar, of Fairview, N.J., has been charged with second-degree attempted murder. He was also charged with second-degree assault for injuring another speaker who was on stage with Mr. Rushdie. He pleaded not guilty and is being held without bail at the Chautauqua County Jail.

Mr. Rushdie sustained three stab wounds to the right side of his neck and four stab wounds in the stomach, according to Chautauqua County District Attorney Jason Schmidt. The author also had a puncture wound in his right eye and two in his chest, the district attorney said Sunday.

Mr. Rushdie spent years under police protection after Iran’s then Supreme Leader Ayatollah Ruhollah Khomeini issued a fatwa, or Islamic edict, in 1989 demanding his death after the publication of “The Satanic Verses.” The 1988 novel, which fictionalized elements of the Prophet Muhammad’s life, caused uproar among some Muslims, who called it blasphemous.

“By offending Islamic holiness and crossing the red line for more than 1.5 billion Muslims, he exposed himself to public wrath and fury,” Mr. Kanaani said. “Followers of divine religions were offended at the time and still are.”

In 1998, Iran’s reformist President Mohammad Khatami appeared to lift the vendetta against Mr. Rushdie, telling reporters at a meeting of the United Nations in New York that the threat against the author was “completely over” after he had lived in hiding under an assumed name for nine years.

But Mr. Khomeini’s successor as Supreme Leader, Ayatollah Ali Khamenei, said in 2005 that the fatwa was still valid. Mr. Khamenei remains in power. The attack on Mr. Rushdie was less than a week after a story about him appeared on the Iranian government’s official news website, calling the fatwa “an unforgettable verdict for Muslims in the world.”

U.S. authorities say they haven’t reached a conclusion on a potential link between Mr. Matar and the fatwa against Mr. Rushdie.

Mr. Matar was born in the U.S. to parents who emigrated from southern Lebanon, according to the Associated Press.

Mr. Kanaani said concepts promoted by the U.S., such as freedom of speech, “Cannot justify insulting divine religions and their sacred beliefs.”