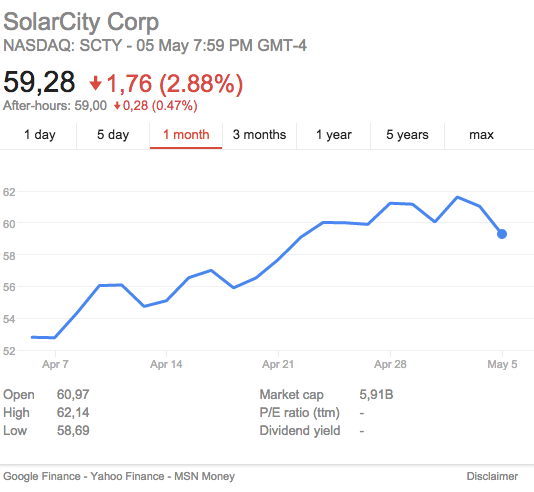 Elon Musk’s cousins Lyndon and Peter Rive are starting to attract almost as much attention in their new US home as their famous home boy. The Rive brothers’s nine-year-old company SolarCity last night delivered quarterly results that revealed installations are running ahead of forecasts and losses narrowing. But such had been the excitement ahead of the numbers that the share price dropped almost 3% – a case of traders buying on rumour and selling on fact. That reverse trimmed the stock’s gain of the past month to 12.3%. Musk bankrolled his fellow SA expat cousins and chairs SolarCity which has a market value of over R70bn.- Alec Hogg
By Christopher Martin

The net loss narrowed to $21.5 million, or 22 cents a share, from $24.1 million, or 26 cents, a year earlier, San Mateo, California-based SolarCity said Tuesday in a statement. Excluding some items, the company lost $1.52 a share, the most since its December 2012 initial public offering and less than the $1.66 average of eight analysts’ estimates compiled by Bloomberg.

SolarCity is pushing into a variety of new areas, turning the company into a diverse supplier of energy rather than one focused mainly on rooftop power systems. That includes offering storage systems developed by Tesla Motors Inc. and microgrids for remote communities. Chief Technology Officer Peter Rive said declining battery costs will make these new technologies more common.

“Solar battery systems will be in all our new installations in five years,” Rive said on a conference call with analysts Tuesday. “We’re seeing strong growth in demand from industrial customers.”

By generating and storing power close to where it’s needed, “we will be able, for the first time, to make the clean energy we produce available on demand,” Chief Executive Officer Lyndon Rive said in a letter to shareholders Tuesday. “The advent of cost-effective storage combined with solar has the potential to usher in a new era for energy.”

SolarCity installed 153 megawatts of panels in the quarter, up from 82 megawatts a year earlier, beating the company’s February forecast of 145 megawatts. Sales rose to $67.5 million from $63.5 million.

SolarCity “is a long-term cash flow story, not a near-term profitability story,” Kallo wrote in a research note Monday. He downgraded the shares to neutral from buy on concerns that utility regulators may make rooftop solar installations less attractive to consumers, while a new valuation method for the company’s long-term leases may confuse investors.

“At the growth rate we are on, every dollar we take in is plowed right back into development,” Chief Financial Officer Brad Buss said on the call.