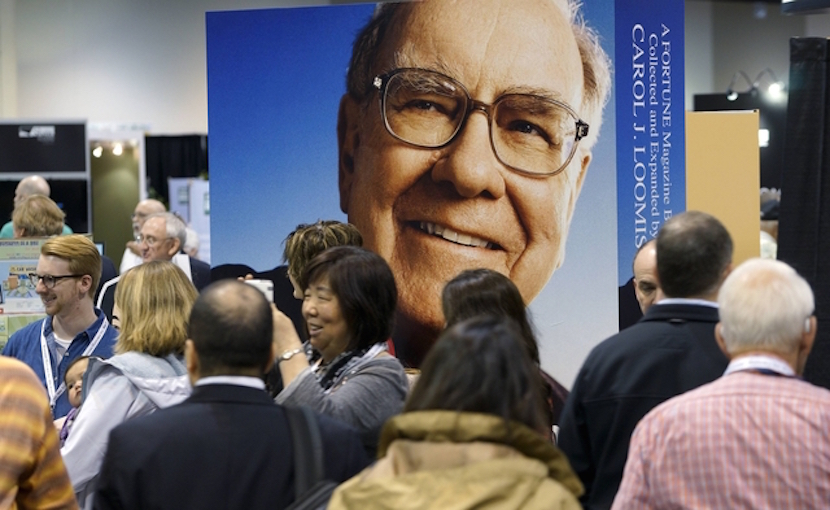 Master capital allocator Warren Buffett often warns shareholders in his Berkshire Hathaway, that size is an anchor to performance. After 50 years of his successful guidance, acquisitions only make sense for the $350bn conglomerate when they’re in the tens of billions of dollars – the “elephants” Buffett hunts that are big enough to move Berkshire’s needle. In the recent $37.5bn acquisition of Precision Castparts, Buffett bagged his biggest prize yet. It’s also his way of repaying trust to Berkshire shareholders, over 90% of whom voted to let Buffett apply the group’s $67bn cash pile rather than distribute it via dividends. – Alec Hogg

At most other companies, agitated shareholders would demand that at least some of a $67bn cash pile was distributed in their direction.

But at Berkshire Hathaway, it seems Warren Buffett is a human firewall against heat from activist investors.

With a record of successful dealmaking spanning five decades, the high-profile investor has been able to argue that the money pouring in from the group’s operating businesses is better spent by him.

His $32.5bn acquisition of Precision Castparts – $37.2bn including its debt – may be the largest deal in Berkshire’s history but it is another in the Buffett mould. It is an unflashy business run by an unflashy management, with a dominant position in industry sectors that are not going away any time soon – short-term wobbles among its energy customers notwithstanding.

Jim Shanahan, equity analyst at Edward Jones, believes Mr Buffett has once again found a business large enough to have meaningful impact on Berkshire’s earnings, even though his company is already the largest conglomerate in the US with a market value of $350bn.

“Certainly, this acquisition is significant, even for Berkshire, and could take Buffett out of the market for large acquisitions for quite a while,” Mr Shanahan says.

However, as Berkshire is also one of the largest insurance and reinsurance companies in the world, Mr Buffett insists on keeping at least $20bn in cash to cover potential claims. As a result, the company will pay forPrecision Castparts by issuing about $10bn in debt and taking a further $23bn out of the cash pot, Mr Buffett told CNBC television.

After bagging what he has called an “elephant” – his term for an acquisition large enough to move the needle for Berkshire – the company will have to take time to “reload”. 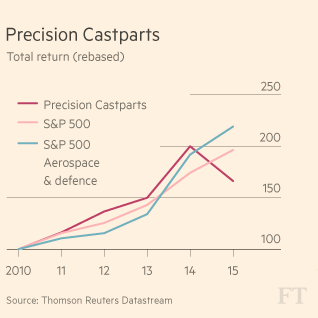 Mr Buffett has sought to take the pressure off by playing down what used to be a central performance measure for Berkshire. His company used to aim for book value growth in excess of the total return on the S&P 500 over a five-year rolling period. He now suggests that comparing the Berkshire share price to the S&P would be a fairer comparison.

Book value as a measure underestimates Berkshire’s worth because the company does not revalue upwards any of the big operating businesses it buys, even when they improve earnings. Precision Castparts would, in effect, stay on the books at today’s acquisition price, even though Berkshire intends “to be in this business for the next 100 years”, as Mr Buffett put it on television on Monday.

In recent years, Mr Buffett has also highlighted several different answers to the question of what Berkshire should be doing with all its cash. He has blessed large bolt-on acquisitions within some of Berkshire’s powerhouse subsidiaries – for example, at Berkshire Hathaway Energy, which has been buying up power companies across the US. Berkshire subsidiaries did 31 such deals last year, paying a total of $7.8bn.

He has stressed capital investment by some divisions, too, including a $6bn programme this year by BNSF to improve its rolling stock and end the service delays that have plagued its recent performance. Berkshire Hathaway Energy has become one of the world’s largest investors in solar and wind power.

Berkshire has also teamed up with 3G Capital, the Brazilian private equity firm, to buy businesses that are cheap because they are in need of radical restructuring. While that interventionist approach is anathema toBerkshire Hathaway, which allows its direct subsidiaries to run largely autonomously, 3G managers have gone in to slash costs at Heinz after acquiring the food group jointly with Berkshire. They plan to do the same now that Heinz has merged with Kraft.

This approach makes some long-time Berkshire shareholders queasy, however, as Mr Buffett discovered when he faced hostile questions about the cost-cutting at his most recent annual shareholder meeting.

Some believe a rethink on dealmaking and payouts to investors must come.

Although Berkshire shareholders defeated a dissident investor proposal last year that the company institute a dividend, even Mr Buffett has raised the possibility of increasing Berkshire’s sporadic and small share buy-back schemes.

“Eventually – probably between 10 and 20 years from now – Berkshire’s earnings and capital resources will reach a level that will not allow management to intelligently reinvest all of the company’s earnings,” he wrote in this year’s annual letter to shareholders. “You can be comfortable that your directors will make the right decision.”

But by splashing much of Berkshire’s cash on Precision Castparts, Mr Buffett has once again put off that day.