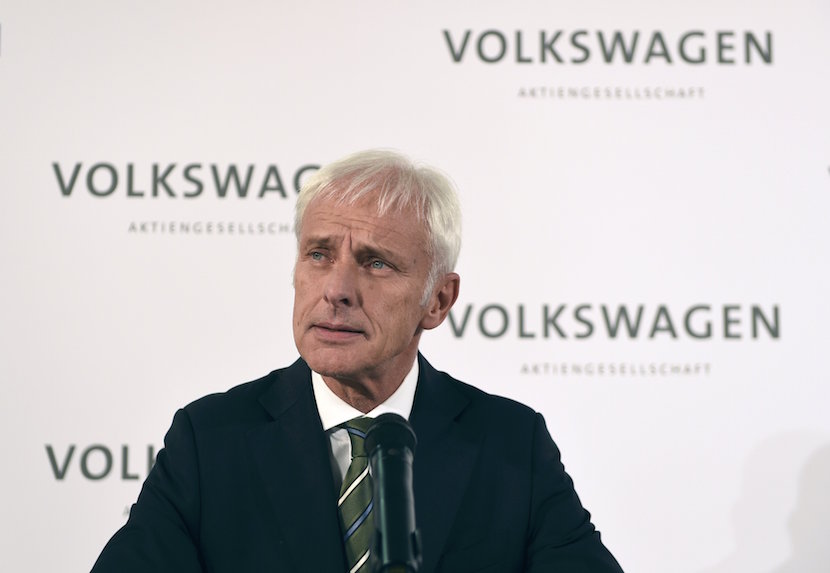 Old habits die really hard in business. And for the global Volkswagen empire, entrenchment of those habits is powerfully illustrated in its choice of 62 year old Matthias Mueller to replace Martin Winterkom who resigned as CEO two days after the diesel emissions scandal broke a week ago. Mueller is a carbon copy of his predecessor at the 600 000 employee organisation. Then again, it’s entirely predictable for a directorate that appears to have not yet appreciated the extent of the problem. Writing in the Financial Times this morning, Yale associate dean David Bach gives seven reasons why the Volkswagen scandal is bigger than Enron whose leading executives ended up serving time in jail. Bach reckons the share price collapse is only the start and that VW, like Enron, could collapse: “Potentially irreparable reputational damage, a crisis of confidence and massive legal liabilities could do the company in.”  In Mueller, the Volkswagen directors were clearly opting for a safe pair of hands. Judging by the initial response to the appointment, they seem only to be compounding the problem. – Alec Hogg

By Carol Hymowitz and Alex Webb

(Bloomberg) — If you place the resumes of Martin Winterkorn and Matthias Mueller side-by-side, it would be hard to spot the difference.

After early positions at Audi, the outgoing and incoming Volkswagen AG chief executive officers spent the next 20 years hopping between development roles in the carmaker’s 600,000- employee empire. Winterkorn became Audi chief before graduating to head the whole group, while Mueller made his penultimate stop at the Porsche unit.

The supervisory board of the troubled parent company Friday named Mueller to replace Winterkorn, who stepped down two days previously amid a widening scandal over rigging emission-test results. That someone with such a similar background was picked to clean up the mess shows the insularity and clannishness of Germany’s corporate governance structure, said Charles Elson, director of the University of Delaware’s Weinberg Center for Corporate Governance.

“I’m not surprised they went with an insider,” he said. “The company may say ‘Who else can take charge?’ and that’s a fair point. But given what’s happened at VW and the breadth of it they would be wiser to make a real break” and go outside for a leader.

Berthold Huber, interim chairman of the company’s supervisory board, said in a statement that Mueller is “a person of great strategic, entrepreneurial and social competence. He knows the Group and its brands well and can immediately engage in his new task with full energy.”

Mueller was picked by the company’s 20-member supervisory board, 17 of them German or Austrian. Of the nine members of VW’s all-male management board, all but one are German or Austrian. Lack of a broad international mix on that board, especially an executive with U.S. experience, may have compounded Volkswagen’s problems in North America, according to Stefan Bratzel, director of the Center of Automotive Management at the University of Applied Sciences in Bergisch Gladbach, Germany.

“They never really had anyone on the board in Germany who had any sort of clout when it came to the U.S.,” he said.

Boards at most big German companies are predominantly male and lag behind companies in countries such as the U.K. and Sweden, which don’t have quotas for women, as well as Norway, which does. While Europe’s largest economy is headed by Chancellor Angela Merkel, just 6 percent of management-board positions and 22 percent of supervisory-board seats are held by women at companies in the benchmark DAX Index, according to the Economy Ministry.

In addition to its lack of gender diversity, Germany’s corporate-governance system is held back by its cliqueishness, said Henrike von Platen, president of the Business and Professional Women advocacy group in Berlin.

“If you meet someone on the board at one company, you happily take them with you to another one,” von Platen said. “Trying to break into that and improve diversity is tough.”

Supervisory boards in Germany are supposed to act as a check on their management boards and look broadly when seeking top talent. While they’re changing, they still have plenty of directors who have overlapping business interests and they tend to choose insiders for the CEO spot.

I better get a move on, I’ve got to catch the 8am Volkswagen. pic.twitter.com/nHChRxbZdj

“It’s still an old boys’ network, and when it comes to top appointments there’s more focus on who knows whom than on doing a broad search” that includes outsiders as well as insiders, said Bob Benson, head of RL Benson Associates, a New Canaan, Connecticut, consultant to executive search firms.

Change is coming, though. German lawmakers earlier this year voted to require more than 100 of the largest listed companies to allocate 30 percent of vacant supervisory board positions to women starting next year.

People probably should have been more suspicious of Volkswagen http://t.co/XXigazb54f pic.twitter.com/ki8u0ilLxW

The hope is that as supervisory boards become more diversified, so will executive ranks. At Siemens AG, for example, before Lisa Davis, an American, was named head of energy operations in 2014, all of the company’s seven management-board members were male. All but one of them was born within a 100-mile radius of Nuremberg, the Bavarian city that’s one of its major manufacturing hubs. A second woman was named to the management board this year. CEO Joe Kaeser, who counts Daimler AG and Allianz SE among his supervisory boards, has worked at Siemens for 35 years.

Another company that has been undergoing a board and management makeover is Deutsche Bank AG. After Paul Achleitner, a former executive at Allianz SE and Goldman, Sachs & Co., was named chairman in 2012, the bank announced the promotion of Anshu Jain and Juergen Fitschen to co-chief executives. They replaced Josef Ackermann, who’d led the bank for 10 years.

Eight of the 19 directors on the bank’s supervisory board have joined in the last three years, including two American women: former JP Morgan Chase CFO Dina Dublon and attorney Louise Parent. The board has played an active role, replacing Jain this summer with John Cryan and announcing that Fitschen will step down as co-CEO next year.

“This shakeup at Deutsche Bank is among the first signals I’ve seen that a new form of corporate governance is taking hold in Germany,” said executive-search consultant Benson.

Such changes are a ways off at Volkswagen, where the Porsche and Piech families hold a majority of voting shares in the automaker and five seats on the supervisory board. Two of the board family members are women; other women include Annika Falkengren, CEO of Sweden’s Skandinaviska Enskilda Banken AB.

Mueller, whose contract as CEO goes until 2020, had run the maker of the 911 sports car since October 2010. He boosted Porsche profit 62 percent over four years. Deliveries are on track to surpass 200,000 vehicles for the first time in 2015, with the addition of new models such as the Macan.

“My most urgent task is to win back trust of the Volkswagen Group — by leaving no stone unturned and with maximum transparency, as well as drawing the right conclusions from the current situation,” Mueller, 62, said in a statement.