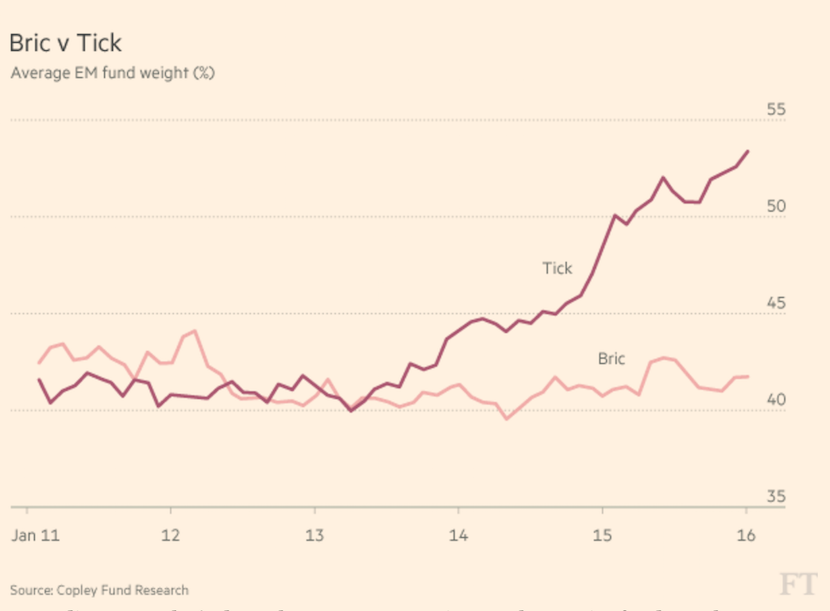 One of the more interesting asides from Davos this year came via comments by IMF managing director Christine Lagarde when asked how she saw the economies of the Brics (Brazil, Russia, India, China, SA) performing in 2016. Lagarde gave some detail on the outlook for first four (poor; very poor; great; OK) but never mentioned South Africa. A similar approach is followed in this excellent piece below from the Financial Times of London where SA isn’t mentioned among the Brics. That illustrates an uncomfortable reality – although SA cracks an invitation to the annual gatherings – and is even a formal participant in the proposed Brics Development Bank – for the rest of the world, the Brics end with China. None of which is of much relevance as you’ll read through the article below which argues that troubles in Brazil and Russia have killed the concept of Brics – with Taiwan and South Korea replacing them as global economic drivers. Once again, no mention of SA in the new Ticks anagram. – Alec Hogg

The Brics are dead. Long live the Ticks.

The Brics concept, based on the belief that the quartet of Brazil, Russia and India and China would power an unstoppable wave of emerging markets-led economic growth, gripped the firmament for more than a decade after it was conjured into existence by Jim O’Neill, then chief economist at Goldman Sachs, in 2001.

But the deepening recessions in Brazil and Russia have now dealt such a blow to faith in the Bric hypothesis that, late last year, even Goldman closed its Bric fund after assets dwindled to $100m, from a peak of more than $800m at the end of 2010.

In its place, emerging market fund managers appear to have stumbled on its potential replacement – the Ticks, with tech-heavy Taiwan and (South) Korea elbowing aside commodity-centric Brazil and Russia.

Aside from a catchy acronym, the realignment tells us much about the changing nature of emerging markets – and the world in general – with services, particularly technology, to the fore and trade in physical goods, especially commodities in retreat.

“Bric is not the engine of emerging market growth it was. There is a new order of things,” says Steven Holden, founder of Copley Fund Research, which tracks 120 EM equity funds with combined assets of $230bn.

“Tech is just rampant and the consumer is what you are investing in EMs now. I don’t think many people are aware of the new EM story as much as they should be. They think ofBrazil, Russia, materials, big energy companies. That has changed hugely.”

Richard Sneller, head of emerging market equities at Baillie Gifford, whose EM Growth and EM Leading Companies funds invest 45-50 per cent of their $10bn-15bn of assets in technology companies, adds: “In many emerging markets the speed with which young consumers are adapting to technological change, in areas such as ecommerce and online shopping, is much faster than in the US.

“Trends that we hoped would emerge 15-20 years ago have come to generate significant cash flows.”

Luke Richdale, chief client portfolio manager, emerging markets at JPMorgan Asset Management, which manages $70bn in EM and Asia-Pacific equities, says: “We are seeing leapfrogging [of technology] going on in China. There are models in the west, bricks and mortar etc, that simply won’t happen there.”

According to Copley’s data, the average emerging market equity fund now has a near-54 per cent weighting to the Ticks, up from 40 per cent in April 2013, while the weighting to Brics has remained in the low 40s, despite a sharp rise in China’s index weighting, as the first chart shows.

As of December, 63 per cent of funds had at least 50 per cent of their assets invested in the Ticks, while only 10 per cent had such high exposure to the Brics.

Houses such as JPMorgan, Nordea and Swedbank have a weighting of at least 35 per cent to Taiwan and Korea alone in at least some of their funds, while vehicles managed by Carmignac, Fidelity and Baillie Gifford have exposure of 3 per cent or less to Brazil and Russia.

The average EM equity fund now has as much exposure to China’s IT industry as it does to the country’s financial sector, as the second chart shows – despite the index weighting of financials being 4 percentage points higher – following a sharp rise in tech holdings in the past three years. 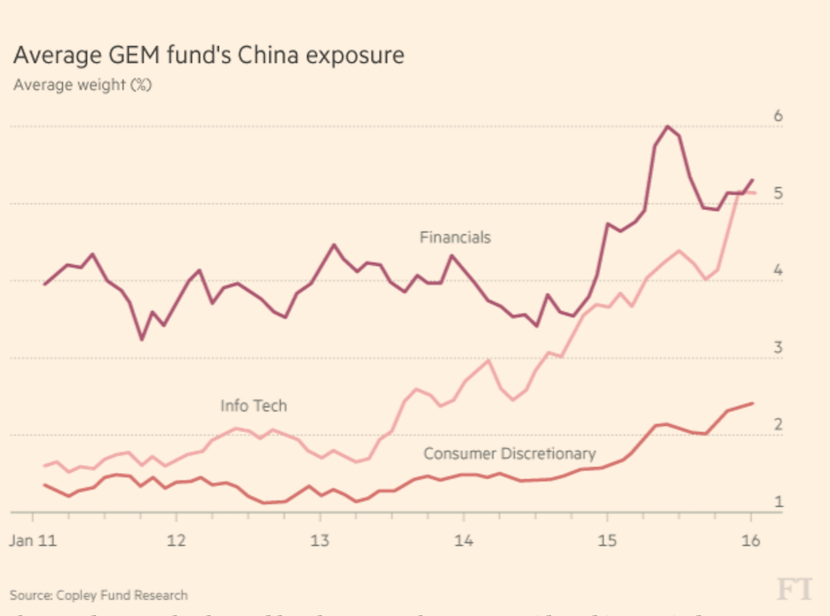 The trend was turbocharged late last year when MSCI widened its EM index to include companies listed overseas, adding the likes of New York-listed Alibaba, Baidu and Neteaseto the index alongside existing heavyweights such as Tencent.

Wider afield, the two stocks most widely owned by the 120 funds monitored by Copley are Taiwanese chipmaker TSMC and Korea’s Samsung Electronics.

“These are global companies that are either leaders or significantly well positioned in oligopolistic industries,” says Mr Sneller, who also holds Taiwan’s Hon Hai Precision Industry (also known as Foxconn), partly in the hope that Apple, its largest customer, will start to source automobile parts from it if the US tech group makes a strong push into vehicles.

To some extent, funds’ buying of Ticks and tech stocks reflects their rising weightings in the MSCI index, particularly with many basic materials and energy companies suffering sharp falls in market capitalisation amid the commodity rout. The four Ticks now have a combined weighting of 62.4 per cent.

But Mr Holden says many managers have been making active choices. “Managers are definitely ramping up their technology exposure. The numbers buying and overweight [the index] have gone up. For some funds, the index means nothing.”

Almost a third of funds are now overweight Taiwan, up from just 8 per cent in September 2013, Mr Holden says.

One unanswered question is whether this trend reflects an underlying structural change or whether it is purely cyclical, with sectors such as IT and consumer stocks naturally seeing their weightings rise as commodity-related companies go backwards.

Taiwan was the largest country weighting in the MSCI EM index during the dotcom boom of the early 2000s, before the start of the commodity supercycle. Brazil, which led that phenomenon, has subsequently seen its weighting fall from a peak of 17.6 per cent in June 2008 to just 5.2 per cent.

JPMAM’s Mr Richdale believes it is a bit of both. “There is an underlying structural story but at the same time equity markets in emerging markets are quite cyclical in nature,” he says.

Mr Sneller accepts there is a cyclical element, with some of the consumer-oriented “toothpaste and tractors” stocks he also likes having previously been in vogue in the 1990s, before the Asian financial crises.

However he believes structural factors are also at play with, for instance, online shopping likely to become far more dominant in China than, say, the US.

“The established incumbent legacy [shop] network is not there [in China],” he says. “You go to a third tier city in China and you don’t have swanky malls.

“[Chinese people] value their time extremely highly. Why would you want to waste your time walking around second-grade shopping malls when you can do it online in a fraction of the time?”

Analysis by Michael Power, strategist at Investec Asset Management, suggests the trend may be cyclical. All the Ticks (barring India which has a small current account deficit) are in the same quadrant of a matrix he uses to distinguish emerging market countries – that comprising manufactured goods exporters with an external account surplus.

As the fortunes of these quadrants tend to ebb and flow in line with global liquidity and commodity demand, they tend to perform in a cynical manner.

Yet even here there could be a structural factor. Mr Power says the quadrant inhabited by most of the Ticks “always does best,” in risk-adjusted terms, over an economic cycle, suggesting it should increase its weight over time.

Whatever the truth of that, the rotation of the MSCI index away from primary industries and towards technology does raise a question as to why emerging market equities are still so driven by sentiment towards commodities.

(c) 2016 The Financial Times Ltd. All rights reserved. Please do not cut and paste FT articles and redistribute by email or post to the web.