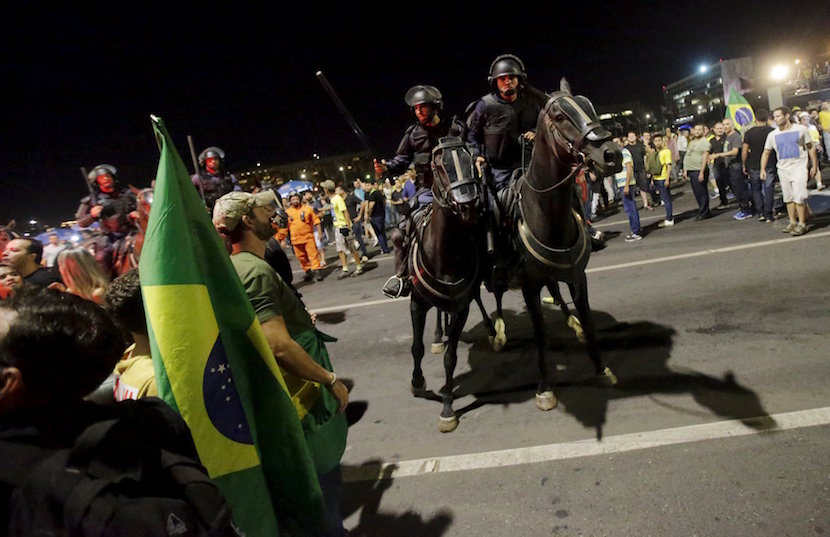 There’s deep irony that it is the chaotic events in one of President Jacob Zuma’s vaunted BRICS allies that is sure to shock his compatriots out of their complacency. Indeed, with the public seething at clear evidence of “State Capture” by the immigrant Gupta family, failure by the ANC to eject its once all-powerful leader could visit similar reaction in South Africa. Behind Brazil’s violence and massive public demonstrations has been the exposure of politically-generated corruption through a network of patronage – eerily similar to what many say has been happening in South Africa. Brazil’s deeply unpopular and heavily implicated President Dilma Rousseff (sound familiar?) played her trump card by appointing her once hugely popular predecessor Lula da Silva into the cabinet. It is a bit like Zuma being able to bring back Nelson Mandela. But, thankfully, Madiba is in a better place and, besides, the Brazilian experiences suggests even that won’t save the king of Nkandla. As the Financial Times of London article below explains, the move has backfired spectacularly. Just as Lula’s swearing in ceremony ended, a Brazilian Federal judge reversed the appointment. He ruled it to be a ruse to provide Lula with immunity from being investigated and prosecuted for corruption (he was arrested last week). The court’s intervention is being hailed as a triumph for Brazilian democracy. But with many compatriots already jailed, including a numerous crony capitalists, Rousseff and her political party are fighting her impeachment and other challenges with every tool in their possession. Again, just like in South Africa, for those intimately involved the stakes couldn’t be higher. But in this country, a peaceful alternative is available. The ANC’s National Executive Committee will be mindful of this option when it meets today. They can choose between recalling Zuma or risk triggering Brazilian-type chaos in South African streets. They have run out of a middle road. – Alec Hogg

By Samantha Pearson in São Paulo

Brazil was teetering on the brink of a constitutional crisis on Thursday after a judge blocked President Dilma Rousseff’s appointment of her predecessor, Luiz Inácio Lula da Silva, to her cabinet, prompting clashes in Congress and on the streets.

Just as Mr Lula da Silva’s swearing-in ceremony drew to a close, a federal judge issued an injunction, suspending the ex-president’s appointment on the grounds that it prevented “the free exercise of justice” in corruption investigations.

Opposition politicians hailed the decision as a triumph for Brazilian democracy, while the government vowed to appeal, lambasting the order as part of a “coup” by the country’s elite, reminiscent of Brazil’s period of military rule. Brazilian assets rallied as investors bet on the government’s collapse.

“Since the end of the dictatorship and the transition to democracy over recent years, this is our most dramatic political moment – we have no idea what tomorrow will even look like,” said Gabriel Petrus, analyst at the consultancy Barral M Jorge Associates in Brasília.

“Dilma’s strategy of defence is attack and this risks creating social unrest and more violent demonstrations on the streets,” said Mr Petrus.

Mass protests swept the country on Wednesday and Thursday night after a court released incendiary recordings of Mr Lula da Silva’s private conversations that fuelled accusations he had been appointed as minister only to shield him from immediate arrest. Military police fired tear gas at protesters outside the presidential palace following clashes with supporters of the Workers’ Party (PT), while demonstrators vandalised union and government buildings in some cities on Thursday.

The Supreme Court also published this week the plea testimony of senator Delcídio do Amaral, a Workers’ Party insider who was arrested last year, accusing Ms Rousseff and Mr Lula da Silva of being aware of the bribery and kickback scheme. Ms Rousseff, who is facing impeachment proceedings over separate allegations she broke budget laws, and Mr Lula da Silva have denied any wrongdoing.

As a minister, Mr Lula da Silva would have immunity in all courts apart from the Supreme Court, which analysts said was more likely to act in his favour.

During the swearing-in ceremony of her mentor earlier on Wednesday, Ms Rousseff accused the opposition of plotting a coup against her government.

“The shouts of the coup plotters will not deter me and will not bring the nation to its knees”, she said as the cries of protesters could be heard outside the presidential palace.

Later on Thursday the lower house of Congress kicked off the impeachment process against her that has been held up for months, approving a committee to study allegations that Ms Rousseff fiddled the country’s accounts to increase election spending – allegations she denies.

In the most explosive recording, Ms Rousseff called her mentor to tell him she was sending him a document confirming his ministerial appointment and that he should use it “only if it is necessary”, interpreted by the opposition as proof that the appointment was designed to protect him from arrest.

In other recordings, the ex-president is heard swearing and making light of the investigations in soundbites aired on television and radio that have gripped the country like one of its dramatic soap operas.

The government has accused Mr Moro, who has been heralded a hero across much of the country, of breaking the constitution.