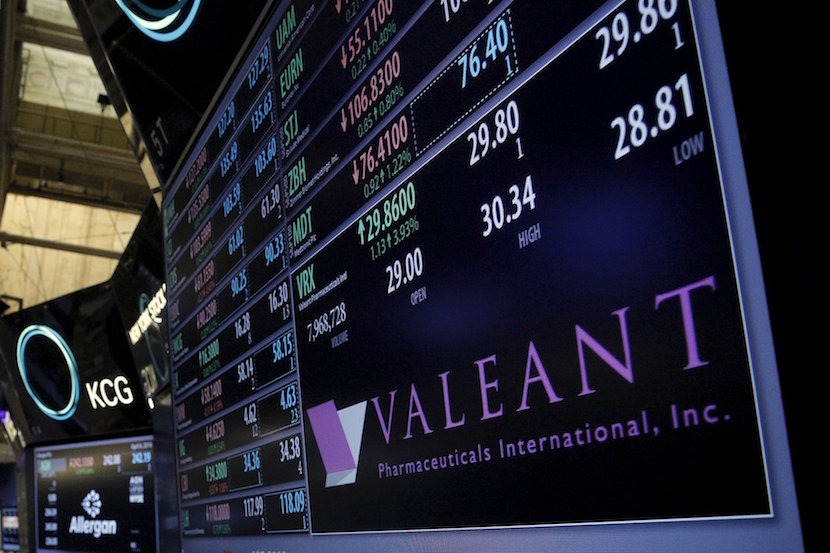 Given that Warren Buffett was largely responsible for helping get the mighty US investment firm Sequoia Capital off the ground, the firm’s heavy losses in listed “chain-letter” business Valeant got plenty of airtime at the Berkshire Hathaway AGM. Especially as Buffett’s business partner Charlie Munger has been openly critical of the Valeant business model. This time there was little diplomacy from either – Valeant was described as “a sewer” and Sequoia’s investment in the business put down to the mistake of a manager who went ahead despite the board of directors trying to warn against it. Both Buffett and Munger say they publicly back the reconstituted Sequoia, especially now that the offending fund manager has departed. – Alec Hogg

(Bloomberg) — Warren Buffett, the billionaire chairman of Berkshire Hathaway Inc., faulted Valeant Pharmaceuticals International Inc.’s habit of pursuing strategies that looked good in the short term but were doomed to come to a bad end.

“The business model of Valeant was enormously flawed,” Buffett, 85, said about the embattled drugmaker Saturday at Berkshire’s annual shareholder meeting in Omaha, Nebraska. “I watched the Senate hearings a couple days ago when Senator Collins and Senator McCaskill interrogated three people from Valeant, and it was not a pretty picture.”

Valeant has endured months of turmoil as it became the face of price increases on drugs in the U.S., attracting scrutiny from regulators and politicians. Since its August peak, Valeant has lost more than 85 percent of its stock-market value, failed to file its annual report on time and said it is being investigated by the U.S. Securities and Exchange Commission.

Berkshire Vice Chairman Charles Munger has criticized Valeant’s practices, drawing return fire from activist investor Ackman, whose Pershing Square Capital Management is one of the biggest shareholders in the drugmaker.

“Valeant of course is a sewer, and those who created it deserve all the opprobrium that they got,” Munger said at Saturday’s annual meeting.

Valeant’s largest shareholder as of March 31 is investment firm Ruane, Cunniff & Goldfarb — which has longtime ties to Buffett. It runs the mutual fund Sequoia Fund, which has faltered as a result of its big bet on the drugmaker.

In March, Robert Goldfarb retired as Ruane Cunniff CEO and Sequoia co-manager in the wake of the fund’s poor performance and the firm’s defense of its Valeant stake as redemptions rose. Two of the fund’s outside directors resigned in October including Sharon Osberg, a former world bridge champion and partner of Buffett in the card game.

Sequoia traces its roots to Buffett. It was co-founded in 1970 by Richard Cunniff and William Ruane, a friend of Buffett’s from the time the two studied together under legendary value investor Benjamin Graham at Columbia University. When Buffett shut down his partnership in 1969 to concentrate on Berkshire, he recommended clients invest with Ruane.

“I think it was a very unfortunate period when the manager got overly entrenched with a business model,” Buffett said about the fund during Saturday’s meeting. “Even now, if you take the record from inception to now with the trouble they’ve had recently, I don’t know of a mutual fund in the U.S. that has a better record. There probably is one, maybe or two, but it’s far better than the S&P.”

The $5.3 billion Sequoia Fund declined 11 percent this year through April 29, trailing almost all of its peers, according to data compiled by Bloomberg. The fund has returned 14 percent a year from 1970 through the end of 2015, according to a March letter to shareholders from the firm. That beat the annualized gains of the S&P 500 Index.

WEB at #BRK2016: The manager who made the decision to buy Valeant against opposition from the board of Sequoia is no longer there.

Jonathan Brandt, a stock analyst at the firm, is among those who asked questions of Buffett and Munger at Berkshire’s annual meeting on Saturday. He didn’t comment on the Sequoia Fund. Ruane Cunniff’s new CEO David Poppe and Brandt have taken over research on Valeant, according to a  letter posted on the firm’s website this month.

Munger said in October that Valeant’s model of acquiring rights to treatments and jacking up prices was “similar to the worst abuses in for-profit education.” Ackman responded later, faulting Buffett and Munger for their holding in Coca-Cola Co. The soft drink maker has “probably done more to create obesity, diabetes on a global basis than any other company in the world,” he said. Coca-Cola is among the largest and most successful stock investments at Berkshire.

Read also: Berkshire AGM transcribed – What would Berkshire do if it lost Ajit Jain?

Munger, a billionaire who also is chairman of Daily Journal Corp. in Los Angeles, said this year that it may not have been smart to publicly criticize Valeant, but that he felt obligated to speak out against what he sees as abusive practices.

Valeant attempted to put the worst of its problems behind it Friday, announcing a shakeup of its board and filing a long-awaited annual report where it promised significant changes to strategy and better oversight of executives. Pearson is to be replaced by Joe Papa in May. Valeant said in a filing that Papa’s pay will amount to about $67.4 million in cash, options and restricted stock for this year.

“In the last five weeks, we’ve recruited a phenomenal CEO and we’re going to work very hard to make Valeant a leader in the industry,” Ackman said on Saturday in a phone interview.

The drugmaker’s stock plunge and Pearson’s departure killed his chances of realizing an unusually big incentive: In January 2015, Valeant arranged for a potential payday of $2.66 billion for the CEO if the shares rose enough.

A grant the company disclosed for the first time Friday would have given Pearson 2.25 million shares if Valeant reached at least $1,181.81 on three specific dates between October 2019 and April 2020.

Valeant’s troubles began with a controversy over increasing the price of two cardiac drugs by 525 percent and 212 percent. The drugmaker has said that Schiller had engaged in improper conduct that led to financial misstatements. Schiller refused to resign from the board and denied the allegation.