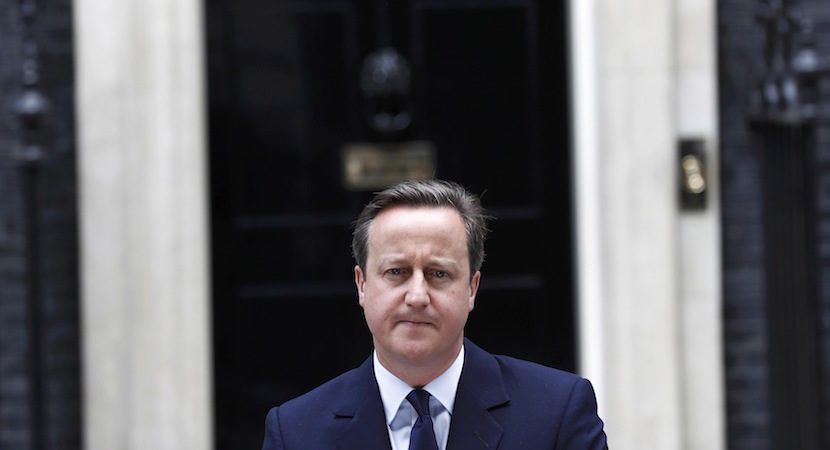 The year of the underdog has claimed another scalp. At one point last night, punters on Betfair could have gotten a 27 times better return if prepared to wager on the shock that turned out to be the correct Referendum result. These were odds were akin to a match race where Frankel, the world’s greatest racehorse, was up against a donkey. But Frankel’s jockey fell off at the critical moment and the donkey trotted home. And like that jockey, the Brexit win suggests a similar ending is in store for both UK politics’ key players Prime Minister David Cameron and Opposition Leader Jeremy Corbyn, both of whom put their houses on the Remain horse. The final tally has it at 52% to 48% for “Leave” with outers a majority of 1.3m in a hefty 72% voter turnout. This result was inverted in Scotland where 68% voted for the UK to stay in the EU – a divergence certain to trigger the clause which allows for another election on Scottish Independence. After the previous defeat, this time those wanting an independent Scotland look sure to get their way. The post-mortems have already begun but at the core, four decades of white anting the EU, blaming Brussels for all the UK’s problems, has trumped a British culture of moderation and aversion to change. As pre-result odds tell us, Brexit is also a spectacular upset for punditry. But it is also a fulfilment of the prediction made in William Rees-Mogg and James Dale Davidson’s masterful book The Sovereign Individual – in this new, networked world of devolving power, citizens are rejecting Big Government and Big Business. The leopard has changed its spots. Fasten your seatbelts. The New World has formally arrived. – Alec Hogg

By George Parker and Michael Mackenzie

Britain has voted to leave the EU in a popular revolt that will send shockwaves across Europe, leaving David Cameron’s premiership hanging in the balance and triggering financial market turmoil across the globe.

On a night of high drama, Mr Cameron’s hopes of securing a Remain vote evaporated as working-class voters turned out in huge numbers to deliver a stunning rebuke to the establishment and the status quo.

As the enormity of the uprising became clear, the pound dived to a 30-year low, setting a record intraday swing of more than 10 per cent between its high and low points; FTSE 100 futures slumped 8 per cent.

Barometers of risk aversion for investors soared in value with the 10-year US Treasury yield falling below 1.50 per cent, the lowest level since 2012. US stock-index futures fell more than 5 per cent while UK FTSE futures were down nearly 9 per cent.

Shares in Japan declined more than 8 per cent as the yen appreciated sharply against the pound and dollar. The pound was down about 14 per cent against the Japanese currency.

At just before 4.45am, the BBC called the result of the historic referendum: a Leave vote which will sever Britain’s 43-year membership of the EU and lead to profound soul-searching across the bloc.

Nigel Farage, the UK Independence party leader who has led the crusade against the EU, had earlier conceded defeat, as opinion polls suggested a Remain vote.

Mr Cameron has promised to honour the verdict of the British people; months and years of protracted exit negotiations with the EU lie ahead, but it remains to be seen whether the prime minister will survive to carry them out.

The prime minister led a cross-party coalition for Remain, backed by Britain’s biggest companies, leading economists and trade union leaders, but swaths of the country simply ignored the warnings of the economic danger of Brexit.

Just over a week ago, the pound approached $1.40 to the dollar and then surged, peaking at $1.5018 as polls were released soon after voting ended, suggesting a Remain victory. The pound touched a low of $1.3224 on Friday.

During the post-Bretton Woods era of floating currencies, the pound has rarely spent time below $1.40 aside from the mid-1980s era of extreme US dollar strength.

The pound had surged after Mr Farage appeared to concede defeat at 10pm as polls closed: “It looks like Remain will edge it.”

Scotland calling for new independence vote, N. Ireland for unification. Cameron may have broken EU & UK in one blow #Brexit

But as the first results came in there was a dramatic shift in political and market opinion, with Leave outperforming expectations, as Labour voters turned out in large numbers to reject the status quo.

Newcastle upon Tyne, which had been expected to be solidly for Remain, backed Britain’s continued EU membership by a margin of only 51-49. In nearby Sunderland, a traditional working-class city in the north-east, there was a resounding 61-39 majority for splitting from the EU.

London, Liverpool and Glasgow voted strongly for Remain, but in countless rural councils and towns across England – including many traditional Labour areas – there were strong votes for Leave. Sheffield, Nottingham and Coventry were among the cities voting for Brexit.

Marcus Roberts of YouGov said: “The gap between the metropolitan, cosmopolitan, middle-class voters and working-class social conservatives has now grown so great that it simply cannot be ignored.”

Andy Burnham, Labour’s home affairs spokesman, said his party’s voters were angry. “The political class has not been listening to their concerns about immigration,” he said.

No matter the outcome, #Brexit polls demonstrate how quickly half of any population can be convinced to vote against itself. Quite a lesson.

As polls closed at 10pm on Thursday, many of the Conservative MPs who campaigned against Mr Cameron in the referendum handed a letter to Downing Street expressing support for the prime minister to remain in his job, whatever the outcome.

That move looked set to damp any early challenge to his leadership, but some have predicted that Mr Cameron would resign if Britain ignored his advice and voted for Brexit.

Among the 86 MPs who signed the letter were former London mayor Boris Johnson, Leader of the House Chris Grayling, and justice secretary Michael Gove.

This was only the third UK-wide referendum. The other two both produced a vote for the status quo: in 1975 Britain decided to stay in the EU and in 2011 it opted to stick with its first-past-the-post system of electing MPs.