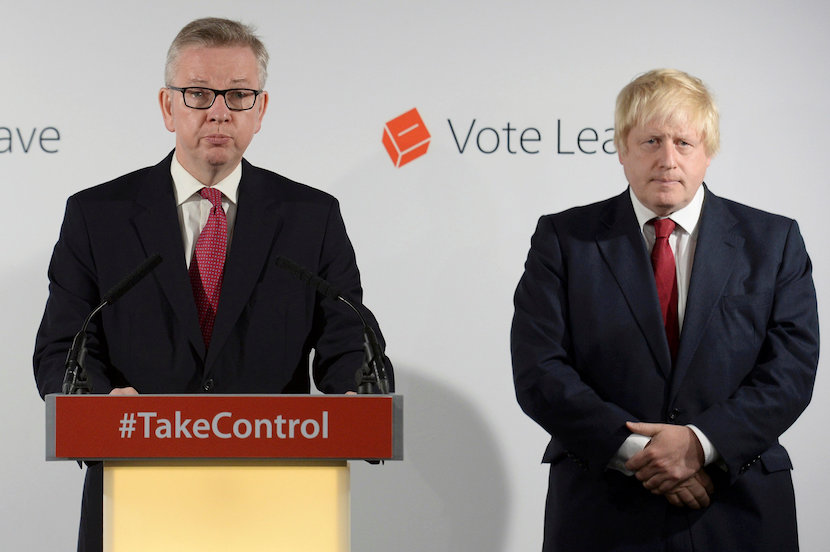 An extraordinary day topped a week the change-averse British will never forget. Here’s a delicious blow-by-blow account of what went down, disabusing any notion that it is only in South Africa where the political shenanigans are beyond belief. The back story of how Justice Minister Michael Gove (and his journalist wife) nailed popular former London Mayor Boris Johnson exposes political assassination, UK-style. You couldn’t make this stuff up. – Alec Hogg

Boris Johnson chose London’s St Ermin’s hotel for what was meant to be the launch of his Conservative leadership campaign for its associations with his hero, Winston Churchill, for it was here that Churchill set up Britain’s wartime special operations team.

But when Mr Johnson turned up, it was not to deliver a Churchillian call to arms but to run up the white flag. The victor of the Brexit campaign was now the vanquished, his hopes of becoming prime minister in ruins.

With rumours swirling that Mr Johnson was considering pulling out, one of his supporters implored him: “March to the sound of gunfire.” Some 25 Conservative MPs had gathered in the hotel to cheer him on but grew increasingly anxious as their candidate failed to appear.

When he did emerge, Mr Johnson initially sounded like he was still making the pitch of a man who hoped to become prime minister. Then the bombshell: as his wife Marina looked on, the former London mayor declared that the person needed to take Brexit Britain forward “cannot be me”.

The room fell silent. A few minutes later Mr Johnson departed without taking questions, but the remarkable story behind his trajectory from bookies’ favourite to non-runner in the race to become prime minister was already unfolding.

Mr Johnson’s nemesis was Michael Gove, the justice secretary – the man who had stood alongside him as the joint architect of the Brexit campaign, the man who had intended to run his leadership campaign. But by Wednesday afternoon, Mr Gove was having second thoughts. His allies said Mr Johnson’s attempts to rally support for his leadership had been “chaotic” and that key people were not coming on board.

“Michael felt that he didn’t have the grip and focus needed to be the prime minister of the country,” said one friend. “If you can’t assemble a team, then that is a serious problem.”

Stories circulated that Mr Johnson had failed to attend a meeting with about 50 pro-Remain Conservative MPs. Key people, including the prominent pro-Brexit minister Andrea Leadsom, had failed to commit to his campaign. “Michael tried to make Boris’s campaign work but it was becoming clear it wasn’t going to work,” the ally said. “He wasn’t giving people the love or attention or making the offers to people that were required.”

Mr Gove’s friends say that a convoluted Daily Telegraph article written by Mr Johnson on Monday had added to a sense of concern among Conservative MPs about his leadership qualities, but allies of the former London mayor said the piece was “sub-edited by Michael”. Mr Johnson’s backers also deny he was responsible for chaos in the leadership bid, saying that Mr Gove was in charge of the campaign, including arranging meetings with MPs and signing up new backers.

Here's the email sent to Michael Gove by his wife revealing concerns about support Boris Johnson has in party/media pic.twitter.com/7j4SyyNlKX

Then came the ominous leaking of an email on Wednesday night, written by Mr Gove’s wife Sarah Vine, a columnist for the Daily Mail, in which she raised questions about Mr Johnson’s character and his credibility in the party, as well as with the press barons Rupert Murdoch and Paul Dacre.

The email was sent by Ms Vine to Mr Gove and two press aides – but was “accidentally” copied to a “member of the public”, who then passed it to Sky News. “It was written to be leaked,” said one Johnson supporter.

Mr Gove’s team insist Ms Vine inadvertently sent it to someone who shared the same surname as Henry Newman, one of Mr Gove’s political advisers. Whatever the truth, the email was highly damaging and appeared on the front pages of several newspapers on the very day of Mr Johnson’s planned launch.

Mr Gove’s coup against Mr Johnson finally came to fruition early on Thursday morning. The justice secretary decided to run against him, calling into question Mr Johnson’s leadership qualities in a statement issued to the press just after 9am.

Mr Gove revealed his plans in a phone call to Sir Lynton Crosby, the Australian political strategist who had been drafted in to help Mr Johnson become prime minister, just as he had helped him become London mayor. That phone call was made at about 8.30am on Thursday. Mr Gove’s team say he also tried to ring Mr Johnson to break the news in person but “could not get through”.

Read also: I have more chance of being “reincarnated as an olive” than being PM – Boris Johnson

“Gove is getting quite a reputation for betrayal,” said one Johnson supporter at the abortive campaign launch. “First he betrayed his friend Cameron over Brexit, now he is betraying his Brexit campaign partner.”

The mood at the St Ermin’s hotel was one of shock, among journalists as well as politicians, even though both groups have grown accustomed to outlandish turns of political fate in recent days.

Mark Field, the pro-EU City of London MP who was planning to back Mr Johnson, agreed with the proposition that it was ironic to have the two most senior pro-Brexit Tories now at each other’s throats. “That is exactly right,” he said. “At least it shows that it’s not just the Labour party that is capable of being a complete shambles.”

Mr Gove, the adopted son of an Aberdeen fish processor, had always decried the propensity of Eton-educated toffs to take the top jobs in politics.

In a matter of days he has helped to finish the careers of two of them – driving his old friend David Cameron out of Downing Street last week and now wrecking the chances of Mr Johnson of succeeding him.

Mr Gove told the FT in an interview in 2014 that he harboured no ambitions to become prime minister. “I don’t have what it takes,” he said. His team say he has revised his opinion. “He’s definitely up for it now.”