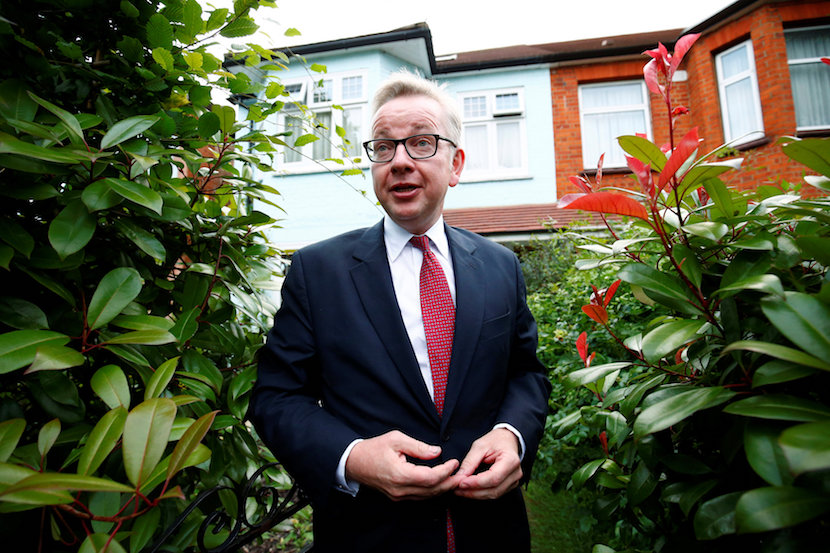 It’s a quarter century since Francis Urquhart started appalling British television viewers with his Westminster chicanery in the brilliant House Of Cards. But given the recent resuscitation of an equally popular series featuring Urquhart’s American double Francis Underwood, even younger Brits will now doubtless be drawing comparisons with their own real life version. Actual events during the week since the UK voted to leave the European Union would have challenged imaginative scriptwriters. The real life “Francis” in this piece is nerdy-looking Michael Gove, a 48 year old Oxford University graduate whose powerful journalist wife pens a weekly column for the mass market Daily Mail newspaper. The lady in question, Sarah Vine, “accidentally” emailed a member of the public with doubts about likely new leader Boris Johnson’s popularity with Conservative Party heavyweights and a couple of newspaper barons. Within hours Johnson had withdrawn his candidacy. The UK media has been quick to seize on the “Shakespearian” drama after Gove together with “Leave” campaign leader Johnson, had helped destroy the career of another supposed pal, Prime Minister David Cameron. Gove, of course, has now thrown his own hat into the leadership ring. In the television series, Urquhart becomes the UK’s Prime Minister – while in the US version, Underwood moves into the Oval Office. Will fiction lead fact this time? With odds os 4/10, Home Minister Theresa May (59) is the hot favourite to succeed Cameron. But Gove is second favourite of five candidates at 4/1. And the Conservatives haven’t elected their pre-leadership frontrunner for decades. Given ructions of the past week you wouldn’t bet against another House Of Cards result. – Alec Hogg

By Alex Morales and Simon Kennedy

(Bloomberg) — Justice Secretary Michael Gove is set to make his case to be Britain’s next prime minister on Friday after breaking with the incumbent and then betraying the onetime front-runner.

In a maneuver that smacked of a plot line from the “House of Cards” television series, Gove on Thursday torpedoed the leadership ambitions of fellow Brexiteer Boris Johnson, four months after opposing Prime Minister David Cameron by joining the ‘Leave’ camp in the EU referendum campaign. Now his sights are set on Home Secretary Theresa May, the early favorite, and three other candidates to head the Conservative Party and the country.

Hours after his announcement, Gove used a BBC interview to skewer Johnson for his inability to build a team and portray himself as the conviction politician the country needs to negotiate a Brexit. “This isn’t about me,” he said. “It’s about making sure that our country can make a success through the challenges and the opportunities that lie ahead.”

With the Tories rudderless and the opposition Labour Party mired in a split that threatens to topple its own leader, Jeremy Corbyn, the Bank of England signaled it could cut interest rates within months — to steady an economy about to feel the full force of the Brexit vote.

The pound, which had fluctuated between gains and losses through the day, slid 0.9 percent against the dollar, completing its worst quarterly nosedive since 2008.

“It now seems plausible that uncertainty could remain elevated for some time,” BOE Governor Mark Carney said in his second televised address since Britain voted to leave the EU. “The economic outlook has deteriorated and some monetary policy easing will likely be needed over the summer.”

With financial markets on edge, the winner of the Conservative contest will have to make some of the most difficult decisions to face any prime minister since World War II, as he or she negotiates a new deal with the bloc.

Alongside Gove and May, the other candidates are Work and Pensions Secretary Stephen Crabb, Energy Minister Andrea Leadsom, and former Defense Secretary Liam Fox. Tory lawmakers will whittle the shortlist down to two, in a series of votes due to start on Tuesday. Then, party members nationwide — who are seen as more Euro-skeptic than the lawmakers — will make the final choice.

And They’re Off: Tory Leadership Runners and Riders

Bookmakers installed May as the favorite. The Home Secretary, who backed the ‘Remain’ side in the referendum, gave an assured campaign launch on Thursday, portraying herself as the candidate who can unite the party and provide “strong, proven leadership to steer us through this period of economic uncertainty.”

She already has the influential Daily Mail on her side. “It Must be Theresa,” the newspaper declared on Friday’s front page. May also has the support of 79 Tory lawmakers so far, according to a tally on the Conservative Home website. Crabb has 22, Leadsom 14, Gove 12 and Fox nine. The party has 330 members of parliament.

“We are in incredibly difficult times and I think we need somebody with a steady hand on the tiller, who’s got proven leadership credentials,” Cabinet Office Minister Matthew Hancock said, declaring his support for May on the BBC’s late evening ‘Newsnight’ program. “Theresa is the person right now to provide that stability.”

The home secretary kept a low profile during the referendum campaign, and moved swiftly on Thursday to allay any doubts among “Leave” campaigners that she might seek to row back on the country’s verdict.

“Brexit means Brexit,” she told reporters. “There must be no attempts to remain inside the EU. No attempts to rejoin it through the back door and no second referendum.”

Next came Johnson’s announcement that he was stepping down — his plans wrecked by Gove, who’d been running Johnson’s campaign until he decided to stand himself.

“It looks like a student political game, when the country needs direction, needs clarity, needs a sense of maturity,” Tory lawmaker Kwasi Kwarteng said in a BBC television interview, reflecting on the day’s events. “I am shocked and surprised that people should behave in this way.”

Three Hours That Turned Boris Johnson From Winner to Also-Ran

Johnson, Britain’s most flamboyant mainstream politician, provided a major boost to Brexiteers when he decided to back their cause and become its highest-profile campaigner. He’d been a proven election winner for the Tories, twice claiming the mayorship of a city that predominantly votes Labour. But some senior Tories saw personal ambition behind his referendum role.

Gove said he had turned on Johnson after recognizing that “while he has great talents and great abilities, he was not equipped to provide the team captaincy and the leadership that the party and the country require at this point.”

Meanwhile, the opposition Labour Party is embroiled in a crisis of its own, as Corbyn clings to power despite an overwhelming vote of no-confidence from his own lawmakers, and a mass defection from his leadership team. Labour’s parliamentarians are now seeking a single unity candidate to take him on in a leadership challenge, with his former business spokeswoman Angela Eagle touted to lead the charge. She was non-committal in a BBC interview, urging instead that Corbyn should go of his own accord.

“He’s been asked to stand down and at the moment we want him to consider his position and do what is right in the interests of the party,” Eagle said. “So, over to you, Jeremy.”