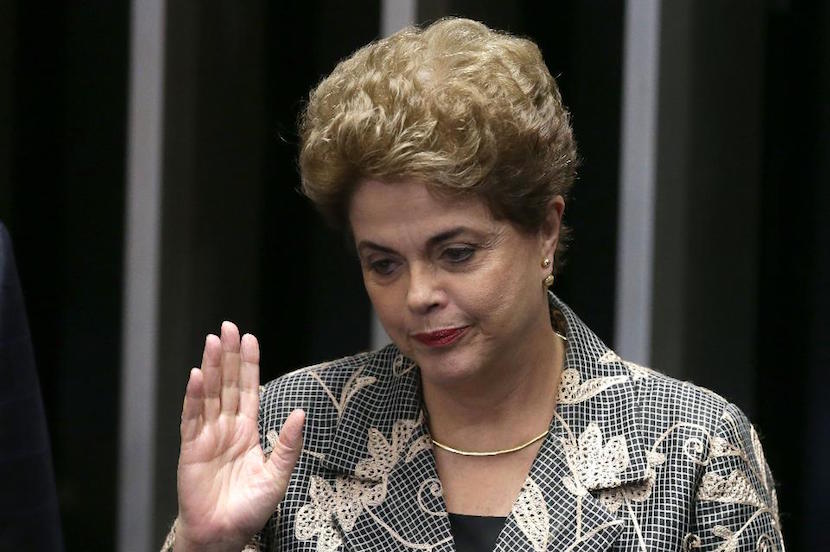 When one draws comparisons between Brazil and South Africa there are a few. Both have young democracies, lagging economic growth and high unemployment, while government is littered with corruption scandals. Brazil’s democracy is however 31 years old, compared to South Africa’s at 22 years. While the other key difference is South Africa’s ruling party has a majority in Parliament, and such ‘impeachment’ motions are easily dismissed, as President Jacob Zuma, has already been through one vote. And what’s interesting in the Bloomberg story below is that what led a majority of Brazilians to back impeachment was a sense that Rousseff mismanaged the economy and was too lenient on rampant corruption. Rousseff has been held accountable, lessons for South Africa’s ruling elite? The municipal elections marked a clear shift in voter behaviour, where ‘no vote’ was the preferred option for around 3 million ANC voters, and one could say the ball is firmly back in their court. – Stuart Lowman

(Bloomberg) — Dilma Rousseff became the second president to be impeached in Brazil’s 31-year-old democracy, paving the way for a fundamental shift in economic policy after 13 years of her party’s leftist rule.

With 61 against 20 votes, the Senate found Rousseff guilty of bypassing Congress to finance government spending, paving the way for her vice president Michel Temer to serve out the term until general elections in 2018. The decision caps a tumultuous period that began after Rousseff’s narrow re-election victory in 2014 and exacerbated the worst recession in decades.

The second impeachment since Fernando Collor was ousted in 1992 has been a traumatic experience for this young democracy, coming on top of a two-year corruption scandal and unemployment at its highest in over a decade. With his mandate as Brazil’s leader confirmed, Temer hopes he can now push more forcefully to put the economy back on track, a challenge that includes unpopular austerity measures.

“Reforms become easier with impeachment out of the way,” said Edwin Gutierrez, the London-based head of emerging-market sovereign debt at Aberdeen Asset Management Plc, which oversees $420 billion. “That’s not to say it will be smooth sailing.”

Markets initially surged after Rousseff was suspended in May and Temer took over on pledges to rein in government spending and introduce more business-friendly policies. There are signs the economy could be on the way to recovery as consumers and executives gain confidence. Retail sales and industrial output are inching higher and economists forecast a return to growth in the fourth quarter.

Behind the narrow allegations of breaking budget laws, what led a majority of Brazilians to back impeachment was a sense that Rousseff mismanaged the economy and was lenient on rampant corruption.

Temer, who is seen by many Brazilians as part of the same political establishment they have come to distrust, must now prove he won’t do the same. Only 14 percent of those polled in a Datafolha opinion survey in July considered the Temer administration good or very good compared with 13 percent for the Rousseff administration in April.

Three of Temer’s ministers have resigned amid allegations of corruption or trying to cover up graft. The Senate chief, a member of Temer’s party, is under investigation for corruption as well. All four deny wrongdoing.

Ruling coalition MP's were bold enough to show Dilma Rousseff the door. Here in SA, ANC MP's are so scared of Zuma, they worship the brute

The 75 year-old constitutional lawyer also faces growing opposition within his own rank and file to unpopular austerity measures, such as caps on civil servants’ pay and cuts to pension benefits. Prospects that a rift in his coalition could deepen after impeachment has made investors more cautious and taken some steam out of the market rally.

“Temer’s ability to win parliamentary support for his fiscal reforms is now being put to the test,” said Nicholas Spiro, a partner at London-based Lauressa Advisory Ltd., which advises asset managers.  “This is the moment of truth for Brazilian assets.”

For now, Temer is turning abroad in search of support. Wednesday afternoon, only hours after the Senate impeachment vote, he will embark on the first of a series of international trips to attract investors and show the world that he is Brazil’s legitimate leader.