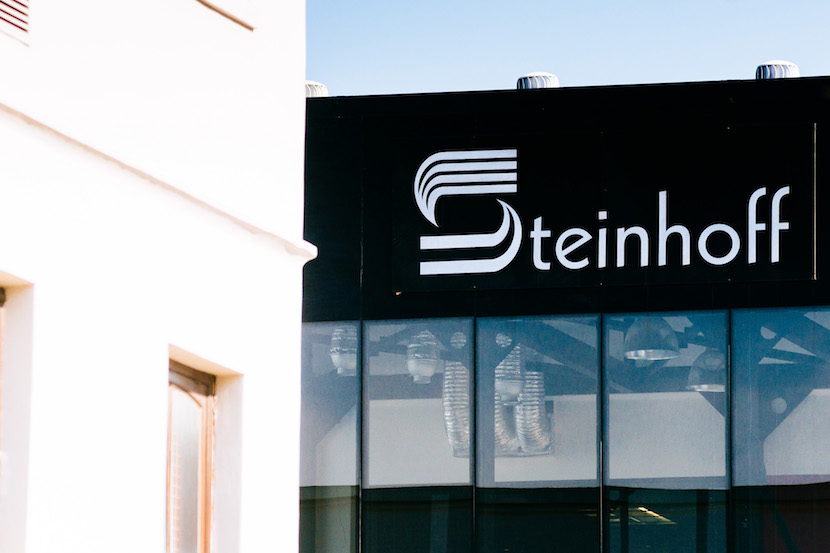 Steinhoff is one of South Africa’s darling companies. It started with small roots and has expanded into a global superstar. The group has been trailblazing having acquired Conforama, Europe’s second largest home furnishings retail chain. The group also paid R12bn for UK company Poundland, while entering the world of mattresses in the US by bedding down a R55bn acquistion of Mattress Firm. Most recently it headed down under planning to buy 100 percent of Sydney-based retailer Fantastic Holdings for R3.93bn. The stock price has also rewarded investors, delivering an almost 300% return over the past 5 years. But is the story still rosy… Ted Black a cash ROAM specialist investigates. – Stuart Lowman

A couple of weeks ago now, a large group of Steinhoff men and women all wearing uniform blue shirts gather on the practise range to work themselves up before tackling what must be one of the finest, most beautiful but toughest golf courses in the world – Leopard Creek. ‘Are they here to celebrate another “done deal”?’ I wonder to myself.

Few changes are as complex and challenging as mergers and acquisitions (M&As). Because a handful of people at the top make them, the closing of deals marks the end of a job well done. They declare victory and move on. Making things work is someone else’s task.

That’s when large numbers of people from two firms plunge into the deep, cold waters of a new work environment. Policies, methods, relationships and routines that give stability suddenly break up. This can affect results. As Steinhoff is well up the experience curve with M&As, I thought it interesting to look at the group through a ROAM result lens.

A caution in using ROAM is that there is no fixed yardstick. Always judge trends, not isolated numbers. The first ones we look at are Assets, Sales and Market Cap. 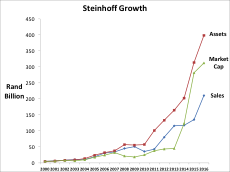 The growth has been massive, especially since 2010. Market cap closely tracks assets and exceeds sales value. Profitability of sales – the ROS% (Cash EBIT ÷ Sales x 100) – shows a rising trend. That’s no mean feat and confirms Steinhoff management’s ability to control costs, expenses and manage market expectations as you see below. 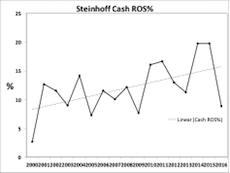 However, what about the first, most critical ROAM measure, the sales productivity of assets – ATO? Most managers and pundits focus on growth to drive the firm’s value. They tend to ignore underlying asset productivity.

Yet, a team that Tom Peters once described as having “at its command the most extensive strategic information data base in the world” – the PIMS (Profit Impact of Market Strategy) Program – highlighted it as a most critical measure way back in the 1970s. 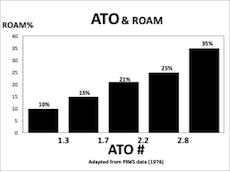 Taken from results of more than 3000 business units worldwide, it shows that the lower your asset productivity, your ATO (Sales ÷ Assets), the lower your ROAM is likely to be. The findings still hold today. Here is the Steinhoff trend. Its ATO is now 0.5. It means for every Rand of assets, or Euros, they generate only 50 cents in sales. 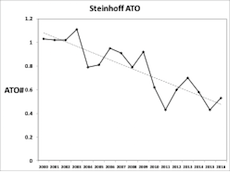 High, vertical integration, it is often argued, enables management to control costs better. However, if it results in high asset intensity – an ATO of 0.5 is very high – this may have a toxic effect on overall profitability. It usually does unless you monopolise your chosen market and can charge high prices. Steinhoff can’t.

Look at the effect on ROAM next. 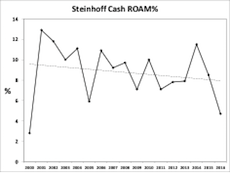 It has to be high enough to recover the cost-of-capital. Let’s say for the Retail sector a reasonable expectation is to generate a 20% Return on Equity. If Markus Jooste were to impose a financial charge on Assets using 20% Cost of Equity, it equates to around a 10% charge for the assets management uses. What does that do to the ROS%? 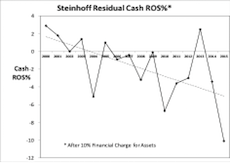 As the PIMS guys predicted, with an ATO of 1 or less, you are likely to generate a loss before tax. Steinhoff fits the research perfectly. For eleven years out of seventeen, the Cash ROS% is negative and it takes us to the ultimate profit measure – economic profit.

If we accept a 20% charge for equity as a good hurdle for management, then this is the picture. 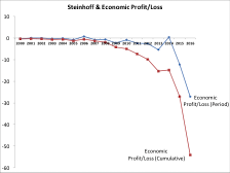 Last year, the economic loss was R27 billion. The cumulative economic loss over the period is R54 billion. If you use 15%, a very ordinary ROE, there’s still a big loss.

The question is, could low ATO eventually upset Steinhoff’s Applecart? Should they “own” all the assets that come with high vertical integration or rather find ways to “control” them instead? If they don’t, the value destruction curve could become unstoppable.

To generate high ROAM is like being a scratch golfer. It’s fairly easy to get to a 15 handicap but much harder to get to single figures. A ROAM high enough to equal or beat the cost-of-capital is a single figure handicap.

To get there, Steinhoff’s strategic task is to start lifting its ATO – its critical number – as it continues to gobble up companies and paying premiums for them.

It brings us to the last of the ROAM cautions – rapid growth will lower ROAM. That is legitimate. But it may mean management has to apply the 80/20 Law for diagnosis and action. If they don’t do some well-managed pruning, in time someone else will.