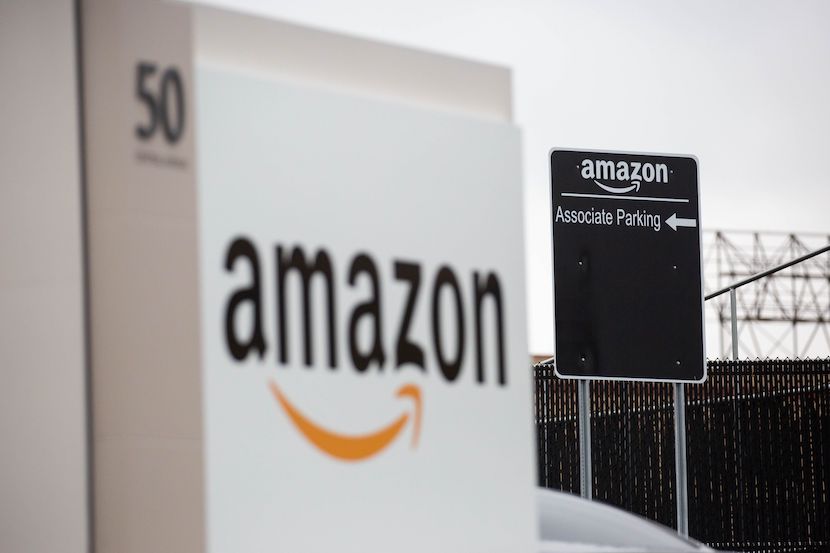 Seattle-based online giant Amazon wants to train some 29 million people from Montana to Nigeria to work in the cloud by 2025. The company announced at the height of South Africa’s lockdown in June that it would add 3,000 jobs , bringing its overall workforce in the country to 7,000. Amazon South Africa customer service director Andrew Raichlin shared that the company was excited to “help keep people working during this unprecedented time” as the unemployment rate kept increasing and many businesses went under. This free training aims to equip the masses with the education needed to work in cloud-computing and while some participants might find jobs at Amazon, others are more likely to find employment opportunities at other companies. – Lindiwe Molekoa

The online giant committed $700 million last year to reskilling 100,000 of its own workers in the U.S. The new effort will build on existing programs and include new ones in partnership with nonprofits, schools and others.

Amazon’s latest initiative is geared toward those who aren’t already employed at the company. The idea, it says, is to equip people with the education needed to work in cloud-computing at a number of employers seeking to fill high-tech positions. While some participants might find jobs at Amazon, it is more likely they would get hired at other companies, including many that use Amazon Web Services, the online retailer’s cloud division.

The free training could support those looking to prepare for entry-level support positions or in helping existing engineers broaden their expertise in areas like machine learning or cybersecurity, the company says.

Teresa Carlson, a vice president at Amazon Web Services, says the company hears almost daily from its clients that they can’t find the right people to fill technical jobs as many organizations move their applications and processes to the cloud.

“We need our customers to have the right skills if they’re going to go through a digital transformation,” she said.

Amazon declined to disclose the cost of its new training programs, but improved industry education benefits the company in other ways. It has hired 275,000 full- and part-time employees in the U.S. since the start of the year. Ms. Carlson says that Amazon finds it must retrain some new hires after discovering their technical capabilities are lacking once they are in the door.

“When you spend as much time as we do hiring people and getting the right people on board, it’s kind of frustrating when you bring them on and you’re having to spend another year or more getting their skills up to speed,” she said. “We see it ourselves, so we put these programs into place. We hear it from our customers and our partners, and it’s the right thing to do.”

More sophisticated cloud skills might be crucial to Amazon’s business. The company’s cloud division has become one of its most important profit drivers. It posted $11.6 billion in sales in the quarter that ended Sept. 30, up 29% from a year earlier.

Cloud computing, which was hot before the pandemic, has become even more central to many companies as they speed up their adoption of such digital tools. Amazon’s cloud rivals, including Microsoft Corp. and Google-parent Alphabet Inc., also have seen strong growth in the sector as users embrace their services, as have companies such as Zoom Video Communications Inc. that provide cloud-based products to facilitate remote working and teaching.

Most of Amazon’s courses can be taken remotely, through Amazon itself or via partners that focus on helping people find new careers. Those organizations are located in places ranging from Newark, N.J., to Missoula, Mont., and internationally from Nigeria to Australia.

The content varies widely. One two-day program prepares students to work as entry-level fiber-optic fusion-splicing technicians, an in-demand field that involves testing and installing the delicate cables made up of minuscule glass tubes that power cloud data centers. Another course, called Cloud Practitioner Essentials, covers the basics of the AWS cloud, while other training focuses on more advanced skills, such as machine learning.

The push could help millions of workers navigate career changes without incurring steep debt at a time when many find themselves out of work and burdened by student loans.

A report commissioned by Amazon and conducted by researchers at consulting giant Accenture PLC found that 33 million Americans could double their income, earning a median salary of $35 an hour, by gaining new training in what the authors describe as “opportunity jobs,” or those in industries deemed at low risk of automation that are expected to grow. Many of those positions are in digital fields.

The obstacles to retraining or learning a new skill can be great. Many people in low-paying jobs or out of work might struggle with child care issues or a lack of time to undertake a new program, to say nothing of the “change fatigue” some feel in pursuing new career paths, said Kelly Monahan, a global talent lead researcher at Accenture. Still, digital skills are likely to be a career differentiator.

“The technical side of work is becoming so paramount,” she said. 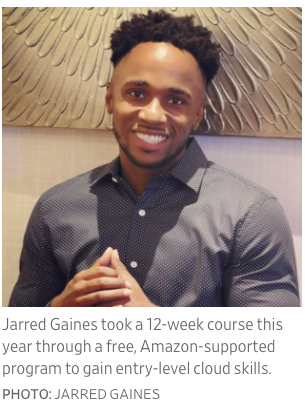 Jarred Gaines started 2020 working as a fitness director and personal trainer at a Boston area gym. The 35-year-old planned to launch his own fitness facility later in the year, but the pandemic squashed those ambitions. In May, he started a 12-week course through a free, Amazon-supported program to gain entry-level cloud skills, taught by Per Scholas, a nonprofit technical school. He started a new job in October as a customer-support analyst at a division of Danaher Corp.

Mr. Gaines—who said he still is passionate about fitness but doesn’t miss the 5 a.m. client appointments—says a technical career hadn’t been on his radar. “My experience with tech was mostly upgrading my cellphone for the newest one Apple told me to,” he said.

He hopes to take on increasingly sophisticated cloud and engineering roles, and continues to take community college courses, but he acknowledges a career shift takes additional effort. “Be ready to grind,” he said.

Amazon says it is on track in its own efforts to retrain its workforce. The company trained 15,000 workers in the first year of its upskilling pledge announced in 2019 and says it would meet its goal of reaching 100,000 staffers by 2025. The most popular retraining program internally so far has been Amazon Career Choice, in which the company subsidizes community college courses, setting up employees to eventually leave Amazon. Most courses so far have focused on health care, transportation or technical jobs but can vary regionally, a spokeswoman said.

For more on Amazon: