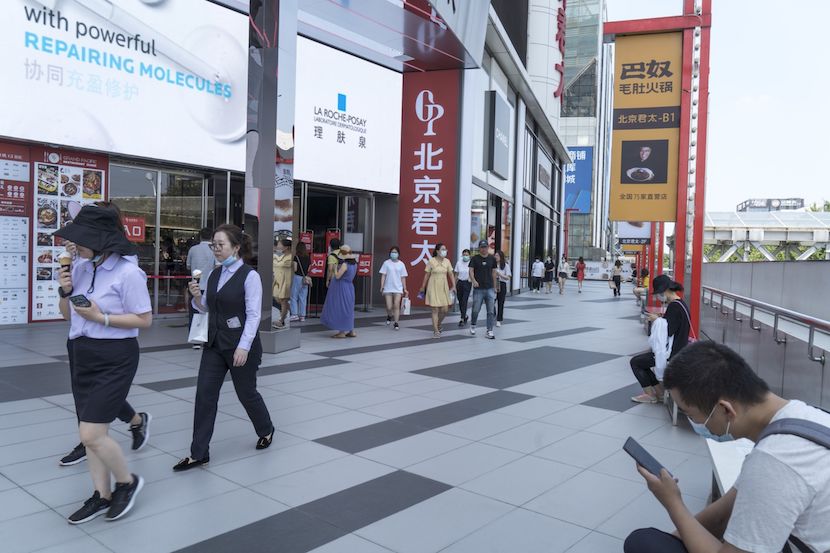 One of China’s largest property developers, Evergrande, is facing a liquidity crunch that could put pressure on the real estate company to continue as a going concern. As a standalone, Evergrande’s possible demise wouldn’t be seen as the end of the world, however, the financial contagion caused could ripple through the Chinese economy. Evergrande is unlikely to make interest payments next week on its approximate $300bn debt burden and may even miss an upcoming principle payment on at least one of its loans. There is concern that this could send shock waves through the Chinese property market with many parties affected, which has negatively affected sentiment across the board in China. This coupled with weak economic data and a government that is looking to tighten its grip on capitalist China spells trouble for the world’s second largest economy. – Justin Rowe-Roberts

(Bloomberg) – Intensifying concern over the impact of a China Evergrande Group default is rippling through the nation’s financial markets.

Developers led declines on the Hang Seng China Enterprises Index, with Country Garden Holdings – the nation’s largest developer by sales – losing 7.2% and Sunac China Holdings sinking 11%. This week alone the two stocks have fallen more than 21%. China’s high-yield dollar bonds fell as much as 4 cents on the dollar Thursday, according to credit traders, with those issued by Fantasia Holdings Group — a weaker-rated developer — down about 10 cents.

China’s junk bond yields have climbed to an 18-month high, according to a Bloomberg index. In Shanghai, bank stocks have suffered their fastest selloff in seven weeks.

The outlook for Evergrande is deteriorating by the day. On Thursday, Evergrande’s onshore unit halted trading in all bonds after a domestic rating cut put it among the country’s riskiest issuers. S&P Global Ratings also downgraded the developer, saying its liquidity and funding access “are shrinking severely.” Earlier this week, Chinese authorities told major lenders that the firm won’t be able to meet interest payments on loans due Sept. 20, according to people familiar with the matter. That came after the firm hired advisers for what could be one of the country’s largest-ever debt restructurings. 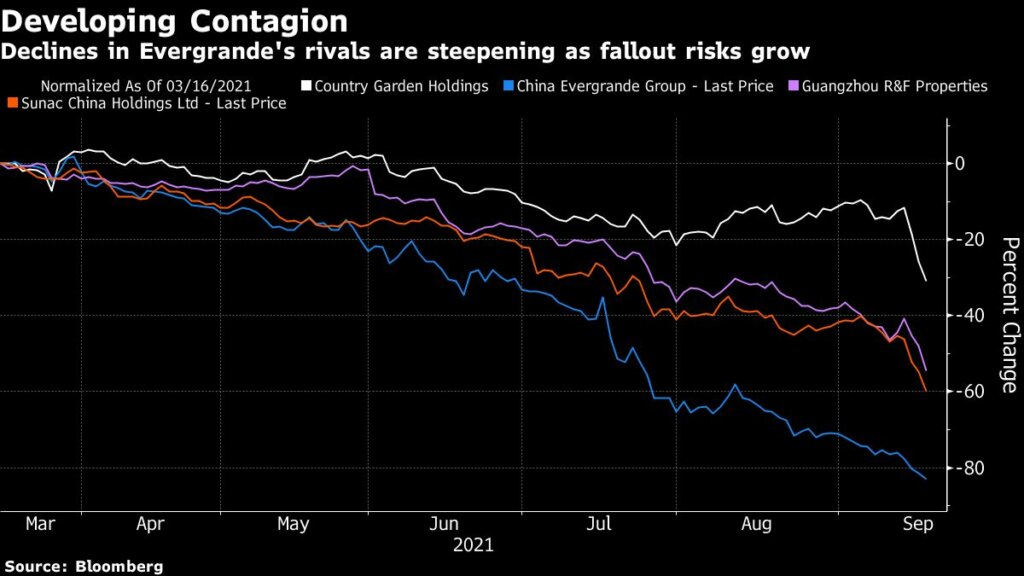 Broader signs of stress in the banking system are less apparent. Interbank lending rates remain near averages, showing sufficient liquidity in money markets. But some banks in China appear to be hoarding yuan at the highest cost in almost four years, a sign they may be preparing for what a Mizuho Financial Group strategist called a “liquidity squeeze in crisis mode.”

Bank loans and other borrowings from firms including trusts accounted for about 81% of Evergrande’s ¥335.5bn ($52bn) of interest-bearing debt coming due in 2021. Top lenders include China Minsheng Banking, Agricultural Bank of China and Industrial & Commercial Bank of China. In a statement late Monday, Evergrande said rumours that it will go bankrupt are untrue.

Next week will be a litmus test for the company. The firm is scheduled to make interest payments due Sept. 23 of $83.5m for a dollar note and ¥232m for a local note, Bloomberg-compiled data show.

Softness in the housing market – which comprises about 28% of China’s economy – is becoming more evident. Data Wednesday showed home sales by value slumped 20% in August from a year earlier, the biggest drop since the onset of the coronavirus early last year. Responding to a question on Evergrande’s potential impact on the economy, National Bureau of Statistics spokesman Fu Linghui said some large property enterprises are running into difficulties and the fallout “remains to be seen.” Economists have warned that China is squeezing its property market too far in its quest to avoid bubbles.

China’s current priorities of promoting common prosperity and deterring excessive risk-taking mean there’s unlikely to be any easing of curbs this year, according to Macquarie Group. The property sector will be a “main growth headwind” for next year, although policy makers may loosen restrictions to defend 5% GDP expansion, Macquarie analysts wrote in a Wednesday note.

The central bank on Wednesday rolled over maturing loans to banks rather than adding more liquidity, a sign that Chinese authorities see no need to inject more support into the financial system.

The Hang Seng China gauge closed down 1.5% on Thursday. Evergrande shares fell 6.4% to the lowest price in almost a decade. Shares of Guangzhou R&F Properties, another junk-rated developer, suffered their worst loss since early 2009. The Shanghai property stock index slid 2.7%.