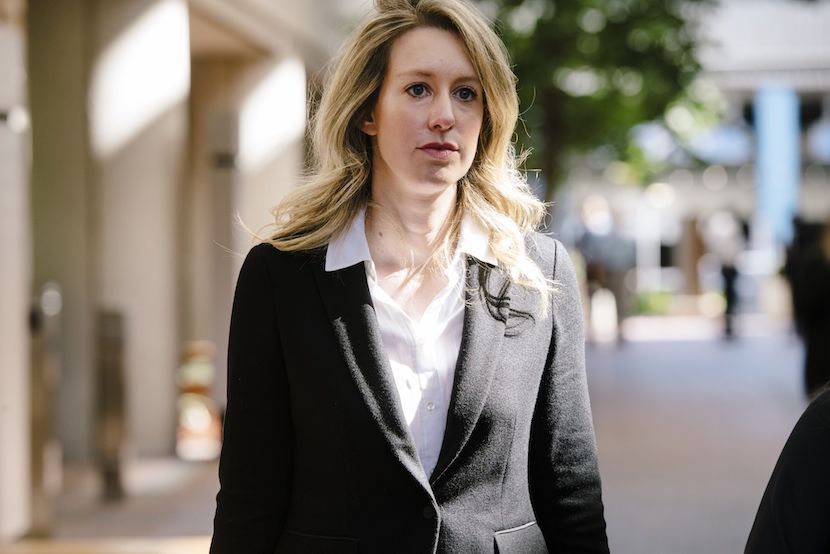 Aged just 19, Stanford dropout Elizabeth Holmes founded Theranos, a start-up healthcare company that promised to revolutionise blood testing, among other things. However, these claims were eventually proven to be false. According to Al Jazeera, Holmes managed to raise over $900m, with a number of prominent investors contributing. Now Holmes faces charges for defrauding investors and, if convicted, could serve 20 years in prison. Below, Barry D. Wood, who spent some time in the court room, questions whether the former CEO – who once persuaded the rich and famous to part with the millions – will be able to convince the jury the collapse of Theranos wasn’t her fault.

Washington dancer and fitness instructor Viky Davis expressed shock looking at then and now photos of Elizabeth Holmes. “It’s like she changed her look to appear more feminine or innocent. Even her crazy eyes look less crazy.”

Drawing from her time training opera singers in Italy, Davis says the deeper voice that was a Holmes trademark resulted from contraction of the lower part of the throat. When done involuntarily the contraction results from tension or insecurity. Now,  says Davis, her facial tension is noticeably diminished. “Instead of a face that is pulled back, it is more relaxed. Apparently, she’s not under as much pressure now.”

Elizabeth Holmes is the Stanford drop out who in 2003, at the age of 19, founded Theranos, a Silicon Valley start-up that promised a revolution in blood testing. Unfortunately, the much-hyped finger stick machines never worked. Before Theranos collapsed in 2018 Holmes was a billionaire from the company stock she owned. Holmes is charged with defrauding investors that included such names as Henry Kissinger, George Shultz, Rupert Murdoch and heirs of the Walmart fortune. If convicted she could serve 20 years in prison.

Prior to the doubts about the efficacy of Theranos technology, Holmes was hailed as a female Steve Jobs, an accolade she did little to discourage by invariably wearing Jobs-like black turtle necks. Gifted with powers of persuasion, Theranos accumulated an avalanche of cash from eager investors. Holmes was lionized by the media. Respected publications wrote laudatory stories often featuring the photogenic Holmes on the cover. She forged partnerships with Walgreens and Safeway.

Elizabeth Holmes trial has been underway since September. Closing arguments are over and the case has now gone to the jury.

I spent only a half-day in the courtroom and that was in early November. On that day I stood in a queue waiting to enter the Robert F. Peckham federal court house in downtown San Jose. At 7:45, flanked by two lawyers, Holmes made her way to the entrance. For whatever reason she looked at me, smiled and spoke a friendly hello. She is tall, thin and strikingly attractive. In the weeks since, Holmes typically enters the court house holding hands either with her mother or her partner, Billy Evans, who she reportedly married in 2019. She gave birth to their child in July.

The 5th floor courtroom is spare. Its textured, pastel walls are adorned with posters of Bay Area attractions—Stinson Beach, Point Reyes, Alcatraz. A United States seal is centered on the front wall above a US flag. A Covid-19 precaution plexiglass partitions form buffers between judge, jury, recorder, prosecution and defence tables. The neatly dressed young woman who said she was from Croatia and stood behind me in the queue took a seat behind the defence table.  Conferring knowingly with the defendant and lawyers during breaks, she was present to support Elizabeth Holmes.

With the call of “all rise” at 8:30, Judge Edward Davila comes in. After preliminaries where defence attorneys sought to limit expected testimony, the 12 jurors (more men than women) all dressed in casual clothes, file in.

A high point was the testimony of Lynette Sawyer, a public health specialist who, in 2014, served six months as co-director of the Theranos laboratory. Astonishingly,  Sawyer said she never visited the lab in the lower level of the Theranos building.

The questioning of Sawyer was a prelude to the appearance of Kingshuk Das, lab director from late 2015 until the company’s demise in 2018. His voiding as unreliable 5,000 blood tests prior to a regulatory review displeased Holmes. The regulator subsequently declared Theranos was “damaging the health and safety of patients.”

Legal analysts had not expected the defence to call Elizabeth Holmes. In fact, she spent seven days on the stand as the trial wound down in early December. Often looking straight at the jury Holmes placed much of the blame for the Theranos debacle on company chief operating officer, Pakistani-born entrepreneur Ramesh “Sunny” Balwani, Holmes long-time boyfriend whom she met during language study in Beijing years earlier. She described a decade-long abusive relationship in which Balwani shaped and controlled her personal and professional life. Balwani faces the same charges as Holmes in a trial scheduled for early 2022.

If Elizabeth Holmes could persuade two former secretaries of state and a slew of famous people to part with millions of dollars, why couldn’t she persuade a jury that the collapse of Theranos wasn’t her fault? That she was manipulated by a powerful man who called the shots behind her back?

Only one juror’s dissent is required to avoid conviction. We’ll soon learn the true strength of Elizabeth Holmes powers of persuasion.