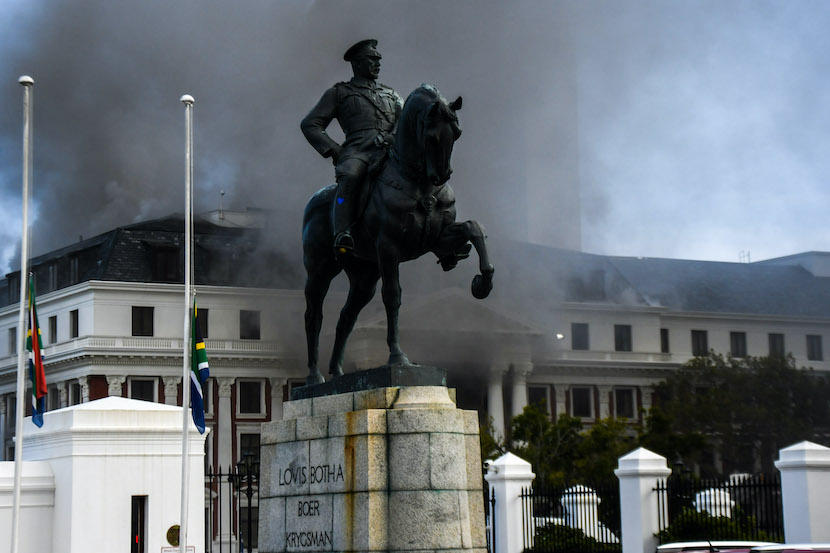 What a start to the New Year! The 49-year-old intruder suspected of setting Cape Town’s Old Assembly in Parliament alight on Sunday, gutting offices and the gymnasium and causing the roof to collapse, will probably turn out to be no Guy Fawkes. Fawkes was caught guarding a cache of explosives destined to send the British House of Lords sky high in 1605, and ever since the event has been celebrated to mark the providence that saved lives and the UK’s key historic buildings. Arson or not, the local damage is major, and President Cyril Ramaphosa’s State of the Nation Speech in February will probably need another venue. Either providence and/or effective security saved the UK’s House of Lords. Neither were in evidence in Cape Town. Instead, one could argue, corruption-leaked coffers and pure ineptitude were to blame. Read on to see how. Just when we thought we were done with 2021’s fiery anarchy… Story courtesy of The Wall Street Journal. – Chris Bateman

JP Smith, a member of Cape Town’s local city council in charge of safety and security, said fire services were first alerted shortly after 6 a.m. local time on Sunday, after plumes of smoke began to fill the air in the section of the building known as the Old Assembly. Hours later the building was still burning, as more than 70 firefighters continued to fight the blaze.

Police took a 49-year-old man into custody for questioning, said Patricia De Lille, the minister of public works. South African authorities said the man wasn’t a parliament employee and might have gained access to the parliamentary precinct by climbing through a back window.

The flames spread from the Old Assembly into working parts of the parliamentary building that include offices and the gymnasium area, gutting it completely and causing the roof to collapse, said Jermaine Carelse, spokesman for Cape Town’s fire and rescue service.

In the National Assembly area, built in the 1920s, the ceiling collapsed and the thick smoke posed risks to the firefighters.

The building complex is a designated heritage site in the Cape Town city center and is the main working legislative site of the South African government.

“This is devastating news,” said South African President Cyril Ramaphosa in remarks to the media.

“This is devastating, coming as it does a day after our send-off for Archbishop Desmond Tutu,” the president’s office said. “Waking up to the destruction of Parliament is a terrible setback from what we were basking in yesterday.”

Mr. Tutu, the charismatic cleric who won the 1984 Nobel Peace Prize for his global campaign to end the country’s racist policies and is credited with coining the term “Rainbow Nation” to describe the optimism of South Africa’s transition to a multiracial democracy, died on Dec. 26 at age 90. His funeral was held on Saturday.

Ms. De Lille said the sprinklers weren’t activated because water valves in the building had been manually turned off. Officials are investigating why closed-circuit television footage didn’t pick up the presence of an intruder.

South African authorities didn’t say what the cause of the fire was.

The president’s annual state-of-the-nation address is normally delivered in February at the parliament. Another venue is likely to be needed for the coming address by Mr. Ramaphosa.

Themba Gubula, spokesman for the National Education, Health, and Allied Workers’ Union, which represents support-staff workers employed at the parliamentary precinct, said that security personnel at the complex were told not to work overtime during the holiday season because of budget constraints.