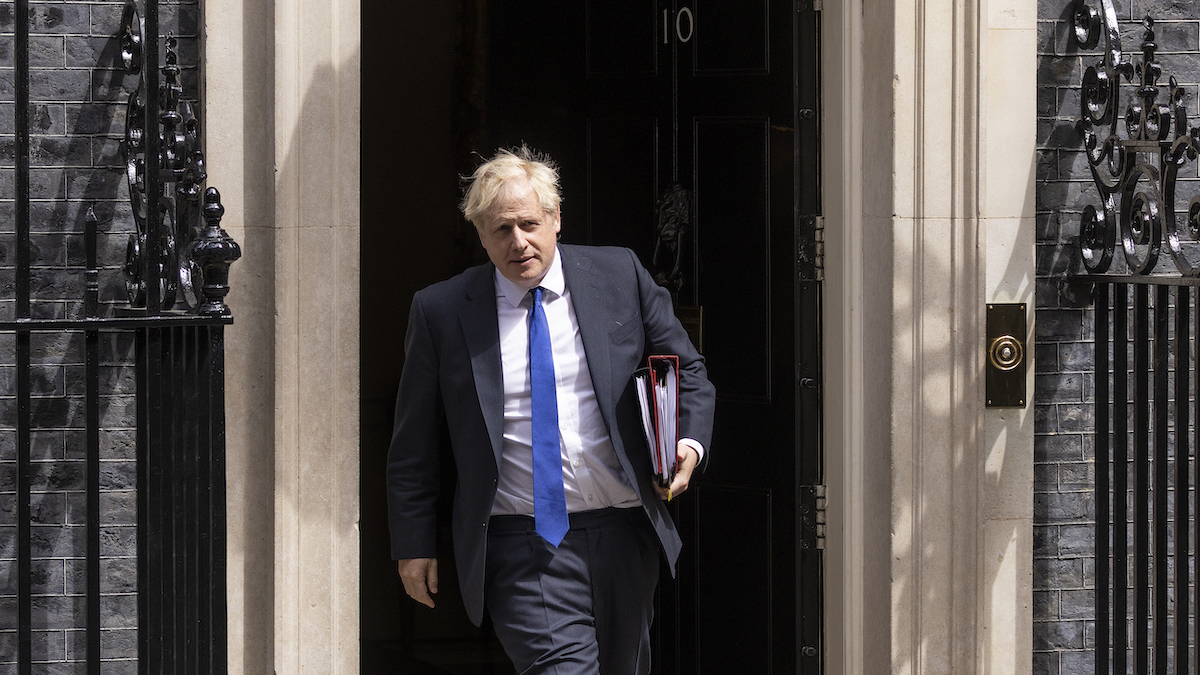 Boris Johnson is set to resign after 50 resignations from his government, and his own chancellor calling on him to leave. The UK prime minister will make a statement to the country today, after it became clear he would be unable to fill the holes in his government, with chancellor Nadhim Zahawi effectively placing him in a checkmate position by calling on him to quit without resigning. Obviously a leadership contest beckons. Simon Lincoln Reader notes how the mayhem stemming from BoJo’s behaviour spilled over this week, and how, in his view, British politics, with the current ‘woke’ culture and identity politics running rampant, is on a hiding to nothing. – Sandra Laurence

I left London for the US just as Boris Johnson was talking shit for the second G7 bukkake in a row. In Cornwall last year, the idiot remarked, “We should rebuild the post-pandemic world in a more gender fluid way”. This time, in the Bavarian alps, he expressed thoughts to the effect that “Toxic masculinity is responsible for Russia invading Ukraine.” Granted, Boris knows toxic – he endlessly cheated on his second wife Marina, he forced his ex-mistress Petronella into an abortion – he doesn’t even know how many children he has. In fact, the only person more toxic than Boris is his father, Stanley.

But attempts to emasculate himself reveal yet another failure to gauge the temperature: the world is increasingly sick of weak men and increasingly aware that weak men make bad times. Being toxic like Boris – and for that matter like Gedleyihlekisa – is terrible, but being weak isn’t much further upstream. There are few things more helpless today than the sight of some pretend male “feminist” mouthing off for political or commercial expediency, or dressing up in a pussycat hat to march with purple-haired land whales shrieking about how miserable cis men have made their lives. Or dangerous – if you don’t believe me, visit  towns across the middle and north of England.

There, men of Northern Pakistani heritage have groomed and gang-raped their way through thousands of young (sometimes as young as 12) girls (last time I said this an NPC soyjak from Fresnaye called Simon Rhoades tried to get me cancelled from Business Day – douche). In all of those blighted places only weak men occupied the police force and local councils – and these two pathetic groups stood idly by, terrified of being called racists, whilst hell erupted and savaged young lives.

Weak men are filled with resentment. It is due to them that an unnecessary pronoun war has broken out – where people unwilling to participate in the theatre of him/they/shut/the/f/up are accused of “transphobia” (weak men could never muster up the courage to publish the data that clearly reveals just how diminished a minority trans people are). It is due to weak men that schools are awash with ideological effluent, that many of the young attending these schools are being medicated against their instinctive curiosity or spirit of adventure.

It is due to weak men that western economies have hit the skids. Weak men panicked and instituted lockdowns – even weaker men celebrated them. Weak men like Justin Trudeau demonised vaccine sceptics, and Silicon Valley’s particularly evil, demented, weak man enforced the demonisation. Weak men, particularly those employed in Britain’s civil service, delighted in work-from-home, dragging productivity off a cliff; it takes a weak man to accept a cheque but not ask who’s paying, or indeed when it needs to be paid back.

Perhaps because the media itself is filled with such weak men, we see a specific scheming, unentertaining, cuckolded, catastrophising profile emerging as the kind of “new” man this desperate age seeks to amplify. Bill Gates, with a can of coke permanently attached to his lips, and colourful friendships, or Neil Ferguson, the incompetent “$cientist” (or whatever he is). Doc Fauci – who hasn’t seen a patient since the 70s – or Pete Buttgieg, or Merrick Garland or the hopeless UK loverat Matt Hancock. Weak men are celebrated in science and in Hollywood, by the BBC, Unilever, Raytheon and Disney.

If we are denied another age of strong men and good women, the idententarians and insurgents littered across corporations, particularly HR departments, media, academic and activism will achieve their vision of an uninhabitable world where nothing makes sense. As for Boris, it appears he is finished, and I’d caution we all agree that being forced out for favouring nonces and weirdos is better for all of us than surrendering in stages to a weak enemy that could actually be beaten.