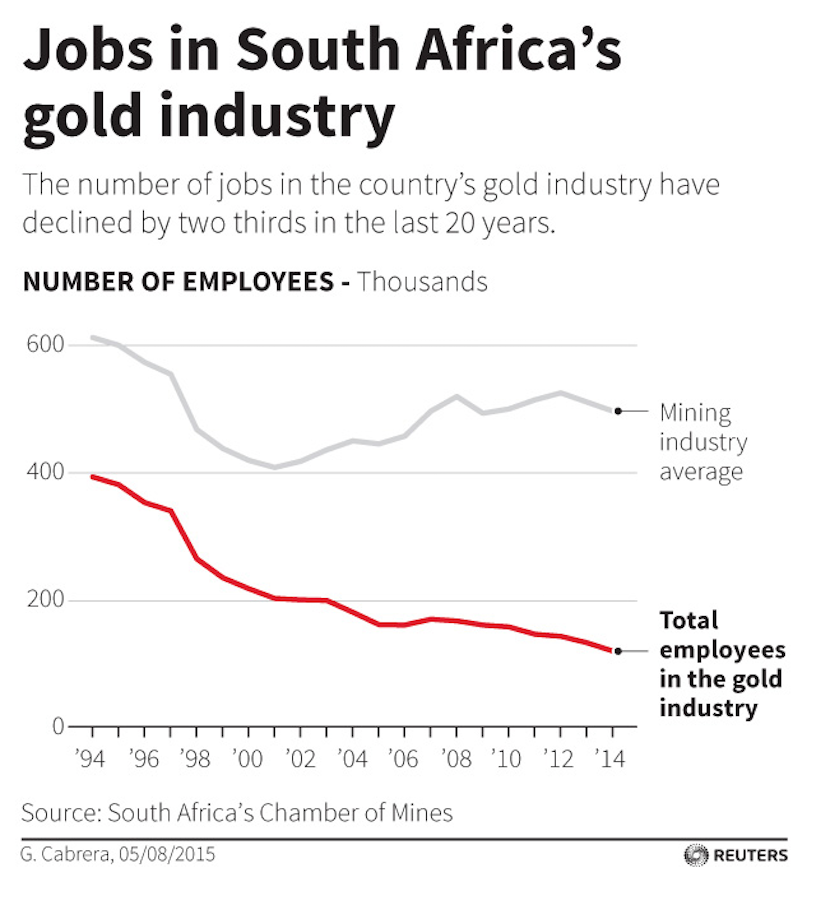 Tension in South Africa’s gold mining industry has passed boiling point as the pincers of economic reality bites deeply. At a time when the gold price is in freefall and productivity sliding, competition between two competing trade unions has resulted in them demanding 80% and 100% wage increases. South Africa’s ruling tripartite alliance has resulted in the ANC embracing the defunct ideology of its communist and labour partners with devastating effects on the economy and employment. It appears to have now pushed the anti-business stance too far. Yesterday, Sibanye Gold’s CEO Neal Froneman aired his industry’s frustration by bluntly urging the politicians to invest effort in “understanding the economics of running a business.” As the Reuters graphic below shows, since the ANC took power in 1994, employment in the gold mining sector has dropped by two thirds. What was that about a jobs crisis? – Alec Hogg

JOHANNESBURG, Aug 6 (Reuters) – South Africa’s largest mining union said on Thursday that 11,000 of its members could lose their jobs under planned cost cutting by mining companies.

A number of mining companies including Glencore, Kumba Iron Ore, Sibanye Gold, Lonmin, Anglo American Platinum and Impala Platinum, have said they plan to cut staff but are facing pressure from unions and the government to maintain jobs.

The National Union of Mineworkers (NUM), which has more than 200,000 members, said on Thursday that according to notices it had received from companies about planned job cuts, thousands of workers could be at risk.

“The figure of the affected employees is 11,000 but that is not a final confirmation (that) all of them will be fired,” William Mabapa, deputy general secretary of the NUM, told a news conference.

President Jacob Zuma’s government is fretting about high unemployment ahead of local elections next year.

Mines Minister Ngoako Ramatlhodi on Tuesday said Glencore had not followed legal procedure in its plan to cut 380 jobs and ordered the company to suspend operations at its Optimum coal mine until the issue was resolved.

Glencore has said it complied with all legal requirements.

The chief executive of Sibanye Gold said on Thursday the government could not legally stop job losses.

“I’m sorry for being so blunt but we are tired of political comments instead of concrete actions,” Neal Froneman said at a presentation of the company’s interim results.

“The sooner government understands the economic realities of running a business the sooner they’ll do the right thing … We understand the issue of job losses and unemployment but you cannot hold companies ransom,” he said.

Mining companies are also engaged in pay disputes with unions, raising the prospect of more strike action after a number of stoppages, including a record five-month strike in the platinum sector last year, which contributed to a sharp slowdown in South Africa’s economy.

Job losses in the mining sector have helped push South Africa’s unemployment rate to 25 percent officially, but some analysts say the rate is higher.

Mining ministry officials, unions and mining companies agreed in talks on Wednesday to work on solutions to the jobs crisis and will report back late next week, the Chamber of Mines, which represents mining companies, said in a statement.