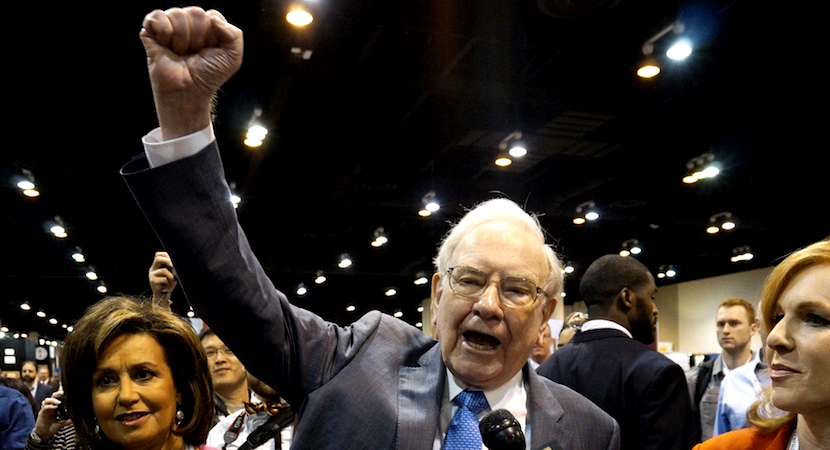 LONDON — Two years ago we asked Biznews community members to help us get the new year off to a good start by sending through their versions of Martin Luther King’s iconic “I have a dream….” speech. The feedback was amazing – and results show reality can and sometimes does surpass our wildest dreams. As 2019 breaks with a trade war between US and China; a potentially disastrous Brexit divorce; and the threat of emotions boiling over ahead of South Africa’s general election, the world could do with all the inspiration it can get. So this year we’re asking Biznews community members to send us stories of people who have inspired them (email [email protected]). Here’s mine.

In April 2006, at the instigation of a banker Laurie Dippenaar and investment guru Kokkie Kooyman, I made my first visit to Omaha in Nebraska to the Berkshire Hathaway annual general meeting. It became a regular event thereafter.

Their pre-flight instructions were to use the 26 hour trip from Johannesburg to read Roger Lowenstein’s biography on our host, Berkshire chairman Warren Buffett.

Until that point I knew very little about the world’s greatest investor and even less why a good number of the 30 000 Berkshire AGM pilgrims queue from well before dawn to ensure they get decent seats in the arena where the annual event is held.

That trip 13 years ago triggered a near obsession about all things Buffett, culminating in the writing of a book aimed at introducing novices to this extraordinary man. That quest brought an appreciation that Warren E. Buffett is a much more than the creator of hundreds of thousands of jobs and billions of dollars of wealth for his supporters. He is  a gift to humanity itself.

Buffett’s widely exposed approach to investing – keep your emotions in check, do your homework, buy when others are selling – is only a part of what he has given us. The greater contribution is how he has touched and often changed millions of lives by his personal example.

Self-made Buffett has accumulated greater wealth than a modern day Croesus. Virtually all of it, however, is used to help those less fortunate than himself. After his death pretty much all of it will be injected into the Bill and Melinda Gates Foundation (note, NOT the Warren Buffett Foundation) because he believes his pal’s creation is the most appropriate way to leverage the cash for the good of humanity.

Despite possessing resources greater than the GDPs of most sovereign nations, Buffett has lived in the same low-key house in the same very public street in Omaha for more than three decades. The cars he has owned are mass produced and tend to last for decades. His idea of a great night out is steak and hash browns at the local Gorat’s steakhouse down the road from his home.

Although he’s now 88 years old, Buffett still drives himself to his modest office which is the nerve centre of one of the most valuable companies on earth. But staffed by just 17 people, mostly employed because they share Buffett’s values and are people he likes having around. The small team reciprocates through undying loyalty and perhaps the lowest staff turnover of any large company HQ on earth.

This is a man who has zero airs who views the world dispassionately and takes no personal credit for his achievements. Indeed, he lives by a motto of trumpeting his failures but never reminding the world about the many times when he was right. Buffett claims to have been born lucky and deeply appreciates having won what he calls “the lottery of the womb” – conceived by honest parents, in a country which has a system which is the world’s best in efficiently delivering goods and services. A system which Buffett says is perfectly positioned to reward his particular skills.

The point of all this is to help show how Buffett is that most rare of our species – a massive overachiever who remains a humble and mature human being. Someone totally comfortable in his own skin, who wears the world like a loose cloak, never taking himself too seriously.

He’s happiest when hamming it up for the thousands of devotees at his AGM, challenging all-comers to a newspaper toss or putting competition, or playing table tennis against a world junior champion. Or tossing the first pitch at the local baseball club’s opening match.

Meeting him, as I briefly did a few times during those trips to Omaha, is like engaging with your typical friendly grandfather, someone authentic who smiles often and loves telling stories to help us understand life better. Someone you listen to carefully because their advice is priceless.

Like the way he this avid bookworm keeps urging the rest of us to read at every opportunity. My worldview has been recast by his guidance towards the right books (biographies, mostly about dead guys, and business case studies). Without Buffett I would likely not have discovered the brilliance of Marcus Aurelius, Cicero or Benjamin Franklin and definitely not found out about the remarkable life of my career heroine, Buffett’s close friend Katherine Graham.

As often seems to happen with people who have inspired us most, Buffett’s unwitting guidance came at one of the darkest times.

After 15 years of intense focus and sacrifice, in 2012 I left the company that was supposed to be my life’s work.

During eight months of enforced gardening leave, for no particular reason I began re-reading my copious notes on the Berkshire chairman. Soon the world brightened as the lessons flowed from volumes of forgotten words recorded during those five hour Q&As at the AGMs, his annual shareholder letters and the many books written about his life.

That project led to the re-assessment of a life which had suddenly changed course. Providing the inspiration to pick myself up, dust away the bruises, and start again. From scratch.

It was the inspiration for the creation of Biznews as a customer-obsessed media company with a vision to deliver a global and rational perspective.

So I guess you can can thank Mr Buffett for the website you’re on. I certainly do.