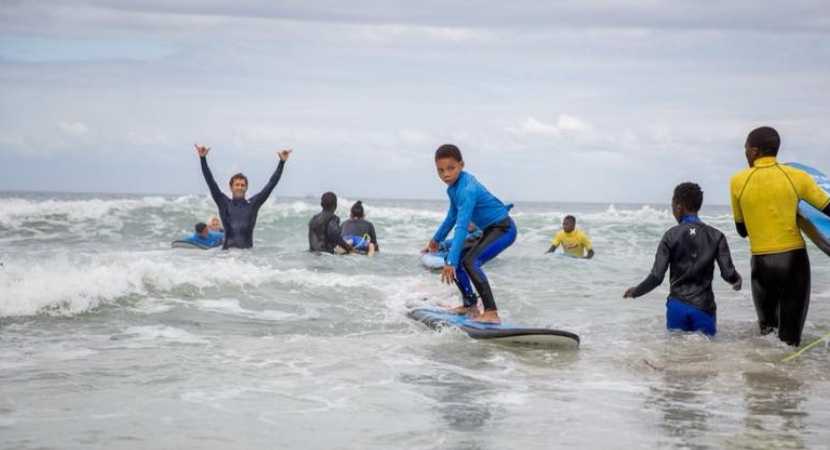 Cape Town-based Frank Solomon is famous around the world for being a big wave professional surfer and for having featured in a popular Red Bull film dubbed ‘Let’s be Frank – the double life of Frank James Solomon‘. Frank has been described by some as breaking the stereotype of surfers by having never really been sponsored and having first gone to university before taking on the world’s biggest waves. But he’s started breaking new ground by also launching something called ‘The Sentinel Ocean Alliance‘ – a programme which helps underprivileged kids learn more about the ocean, surfing and even enabling them to become lifeguards. In this interview, Frank tells us all about the initiative. – Gareth van Zyl

Joining me from Cape Town is Frank Solomon, who heads up The Sentinel Ocean Alliance which helps train up underprivileged kids in ocean safety skills and helps them find future employment as lifeguards. Frank, thanks so much for joining me.

So can you tell us more about why you set up The Sentinel Ocean Alliance and what it does?

I’m a professional surfer and I have been for quite a number of years. I get to travel a lot and I get to see lots of beautiful places and have a pretty epic life. I was travelling Europe and I saw this terrible video of this kid and how they were walking down to the beach – just like I did and just like I did every day as I learned to surf – and he got shot multiple times in the face with rubber bullets. Something kind of just clicked inside me that made me realise that when I was his age, I was able to go and learn the skill that would eventually become my job. He got shot coming down from walking on the same beach (where I surf). So the next day, I went driving around Hout Bay beach trying to find a possible spot where I could set something up and, yes, that’s pretty much how the whole thing started.

You train these kids in various safety skills and you teach them to respect the ocean. They can even become lifeguards, They seem to learn quite a lot through your programme?

Yes, once I had found a suitable location, I actually approached Waves For Change which does surf therapy and they specialise in teaching underprivileged kids from disadvantaged backgrounds about specifically surf and surf therapy – and they do incredible work. I didn’t want to reinvent the wheel so I asked them to come on board and run their curriculum with the kids around Hout Bay and it’s been incredible. We have 100 kids a week now coming through their programme, and it’s been a really great partnership.

That sounds very interesting regarding surf therapy. For some of us up here in Johannesburg and perhaps in parts where we aren’t close to the ocean, what does surf therapy involve?

It’s basically where surfing and being in the ocean is a therapeutic experience for these kids. For anyone who’s been to the ocean, it’s a calming, soothing safe place. They start each day on the beach in their wetsuits, cross-legged, doing a short meditation thinking about positive things. They learn how to meditate. They learn how to cope with the things that they have to deal with at home and Waves of Change does an incredible job in this regard. They have a huge programme and they’ve been a very big part of what I’m doing here in Hout Bay. I’ve basically set up Sentinel Ocean as an umbrella body to manage the site and all the different projects that run within the site, with Waves of Change being one of them, the Life Saving club being another and, eventually, The Ocean School that I want to set up here as well where I’d like to teach the kids about the environment, about looking after the environment especially the ocean.

Can you tell me more about the typical background of the kids that you’re working with?

Yes. The kids come from townships and really difficult communities. When I’m going down to the beach, I’m coming from my nice house and I’ve had a great breakfast. But they are coming down typically from a shack where they have to maybe share a room with multiple people and maybe they’re not even that well-nourished. It’s hard then to expect them to be on the same level. They’re at a disadvantage just from where they were brought up and where they’re born. So, they come from the townships and they have rough lives.

What kind of difference then does it make in their lives, because I’m sure that it just gives them something else to focus on?

Yes, 100%. As an example, I can think about the first guy that I met in this programme – Chadwin. To set up The Waves of Change, we needed to find two coaches within the community, so we found Chadwin from the coloured fishing community in the harbour and we found Anele from Imizamo Yethu, which is the nearby township. When I met Chadwin, he was picking up litter for the City of Cape Town. He was earning R90 a day. He was 18 years old, could not find a job, hadn’t finished school, and he’s gone through The Waves of Change programme. He’s come out of it and is now a qualified surf instructor. He’s got a contract with them (Waves for Change). He earns a salary. He’s also done his lifeguard training through Llandudno Surf Life Swimming Club and he can now be employed by the city. Professional lifeguards earn R10,000 a month. So, his life has been completely changed by the ocean and just by having an opportunity.

You’ve started this initiative in Hout Bay, but do you see this project expanding elsewhere in the Western Cape or the rest of the country?

Yes, definitely. I’ve been starting to look at that, anywhere on the coast where there are small fishing communities because obviously, we’ve also fished out the ocean. People used to live from the ocean and catch fish and that’s how they derived their income. A lot of those smaller coast communities…the people don’t have that kind of income anymore so if I can set up a lifesaving club, Waves of Change surf therapy and an ocean school in a lot of these disadvantaged communities around the coast – I’d then love to think it would make a huge impact and create employment that can give these kids a future income stream from the ocean.

For anybody who is listening to this podcast on Biznews or reading this transcript and who wants to get involved, what can they do to help and how do they get in touch with you guys?

Yes, I’ve got a web site called www.sentineloceanalliance.org. They can contact me. They can donate via the website. Anyone can send me an email and any support is welcome. I don’t know what I’m doing. I’m a professional surfer. I’m not someone who’s run a charity before; I’ve never run a non-profit. I’ve never done anything like this. I’m completely just winging it and kind of learning as I go, but it’s been a really humbling experience and it’s been really incredible to see how, for example, Chad’s life has changed like that. At least he has some kind of future and hopefully, we can have hundreds more kids like that coming through our programme. Just one more thing on the ocean sports economy: a friend of mine is doing a study on it and the industry for surfing, lifesaving, kiting, kayaking, and fishing in the Western Cape is worth R1.6bn – that is, the ocean sports economy. So, if I can train these kids to fit into that economy, whether it’s working on the boat, the tuna boats, or taking people for kayaking, or taking people surfing… then there’s a huge amount of job opportunities there in a country that’s desperately looking for work. The kids just need an opportunity; they have nothing so anything that you can do helps.

Frank Solomon, thank you so much for telling us more about Sentinel Ocean Alliance and I wish you the very best of luck with it going forward.

No worries. Cool. Thanks so much, Gareth.