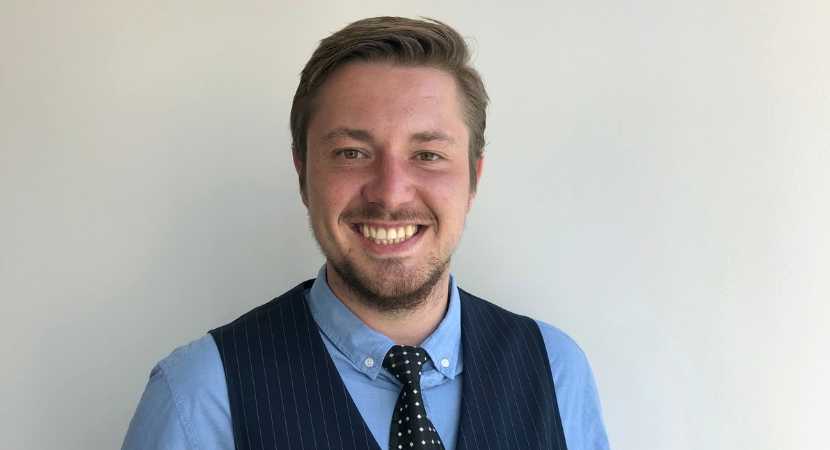 Martin Wierzbicki, an MSc graduate from the University of Pretoria, is making waves in the world of wood science. He was recently named among three winners of the global 2018-2019 Blue Sky Young Researchers and Innovation Award for his research on genome-based biotechnology for designer wood. Wierzbicki’s work has focused on how the genetic makeup of trees can be changed to improve how wood reacts to industrial processing in order to maximise the extraction of biopolymers such as cellulose, lignin and xylan (a complex sugar found in plant cells). His work in this field is regarded as being among the most advanced yet and his research is expected to go a long way in maximising the output of the forestry industry while making it more environmentally sustainable. In this interview, Wierzbicki and his supervisor at UP, Zander Myburgh, tell us more. – Gareth van Zyl

With me on the line from Tshwane is University of Pretoria masters graduate, Martin Wierzbicki who was recently announced as one of the 3 global winners of the 2018/2019 Blue Sky Young Researchers and Innovation Award. With him is also Zander Myburgh who his supervisor. Martin, thanks for joining me on the podcast.

Can you explain what the Blue Sky Young Researchers and Innovation Award entails exactly and the significance of it?

It’s an award that takes applications from all over the world and it focuses on highlighting and putting novel research forward that could bring innovation to the forestry industry. It’s pretty much anything, for instance, that can make the forestry industry more money or make it more carbon-efficient etc. and that’s why I applied for it.

Now, you’ve been recognised for your work on how the genetic make-up of trees can be changed to improve how wood reacts to industrial processing. For the layman out there, can you explain what that means?

When most people think about wood, they either think of solid materials – such as tables, chairs or even the most common forms are paper, pulp and paper and packaging etc. So to get wood from wood to paper there, it has to be processed. It has to be processed at a pulping mill and it typically involves adding chemicals at a certain temperature and separating what you want to keep from what you don’t want to keep. But a newer innovation in the forestry is called bio-refinery. This involves using chemical treatments of the wood to separate each of its components into, basically, starting materials for various industrial products, or high-value products. One example I can name is the component Xylan when chemicals are added and it’s removed from the wood, they treat it some more and you can obtain Xylitol, which is the sugar replacement or the artificial sweetener. That is one of those products. So you take the wood, you add some chemicals and add temperature. It separates the wood and then you get products that you can turn into different products.

Right, so how that can potentially change our world and change how the industry currently carries out its processing? To me, it sounds as if it’s going to streamline things a lot more?

So the main goal of this project and using biotechnology has to do with improving efficiency. So it’s pretty much about keeping the same amount of supply but getting more products out of that supply. Currently, there is a portion of the wood that gets put in that during industrial processing that either has to be removed – because it has low quality – or it’s not a desirable product. So we want to reduce that and get more out of the products. Sometimes you also have to do additional processing to hit higher qualities. If those additional treatments aren’t necessary, then you’re reducing the amounts of energy needed to process the wood to make those products and you are also reducing the amount of money for the chemicals needed for this. So it is better for the environment because you use less energy and fewer chemicals are used. These are quite strong chemicals that have an environmental effect, so reducing both of those while also improving profit margins for the forestry industry is the main goal of this.

And Zander Myburgh, you were a supervisor in this instance with regard to Martin’s work. From your point of view, what is the relevance of this work?

The bigger picture is that we are working with South African forestry companies and the aim is to apply biotechnology to increase the efficiency, profitability and international competitiveness of these companies. So when we look at the competitors of our industry in countries that are big in forestries, such as Brazil and China, they are heavily applying biotechnology to speed up the breeding and to customise trees or processing. So the bigger picture is ensuring the competitiveness of our industry. Also, it’s the dawn of a new bio-economy, so we’re going from fossil carbons – for instance, charcoal and petroleum – to renewable materials. Trees can produce essentially all of the products that we now get from fossil carbon as this (fossil carbon) is actually just old wood that has been carbonised. So that’s the bigger vision: we want to move towards a more renewable greener future.

And Zander, where does our country stand internationally in terms of the wood technology space? Are we quite advanced?

Yes. In fact, we are a world leader. We don’t have a lot of forestry land but we are really efficient. We produce all of the wood that we have in the country from 1% of the country’s land base, whereas other countries such as Brazil, China have maybe ten times more forestry land available to use. The one thing about the South African forestry community is that we have some of the oldest and deepest breeding programmes in the world. So we were among the first in the world to establish breeding programmes and we are quite well advanced in terms of the genetic improvement of our trees. Also, our manufacturing industry, for instance, SAPPI, is a world leader. It’s one of the biggest producers of chemical sellers in the world and it was one of the first companies that moved from paper to this new bio-refinery approach. South Africa in many aspects is a world leader and our own research group here at the University of Pretoria is probably one of the strongest tree biotech and tree genomics groups in the world. In that sense, we are quite competitive.

Martin just to get back to you; what got you interested in this space?

When I was still deciding what to do in my undergrad level they advised looking around for mentorship programmes and I found Zander’s lab. I went to go and speak to him, and I had an interview. He told me about what the group did, he told me about a few papers that the group has produced and the more I read it, the more interested I became especially with the idea of taking wood – which in theory is the most abundant form of carbon capture in the world – and making something, capturing that carbon into physical products and then turning into more products, really got me interested.

Just as the last question – perhaps for both of you – what is the next step in your research and how do you see this panning out?

Well, there are still a few things that we can do in terms of our research. In terms of our model, more layers can be added to it. So as we get more information, more data, we can refine it. I assume SAPPI is already making use of it to guide its genome-based breeding programmes, so it’s pretty much about adding accuracy to its breeding so that they know what to look for on the genomic level. It’s improving their efficiency and that’s where I see it going – improving the model and improving efficiency.

Yes, so from my side what I can maybe explain is that Martin has, in his MSc, produced the most informative gene-based model which provides a good understanding on which genes are involved in making particular aspects of wood by chemical pathways – especially in terms of the biopolymers, the cellulose and hemicellulose in the wood. His model stands out worldwide right now as having incorporated more information than most other people have been able to put together. But to some extent, it’s also been a big data science project which is what Martin is now involved with – he is also training to become a big data scientist. So the future for us here is just informing the genetic improvement of the trees, understanding what the targets are and also understanding how the breeding should be done.

Fascinating. Zander and Martin. Thank you so much for taking the time to chat with me today. It’s been interesting finding out more about it.