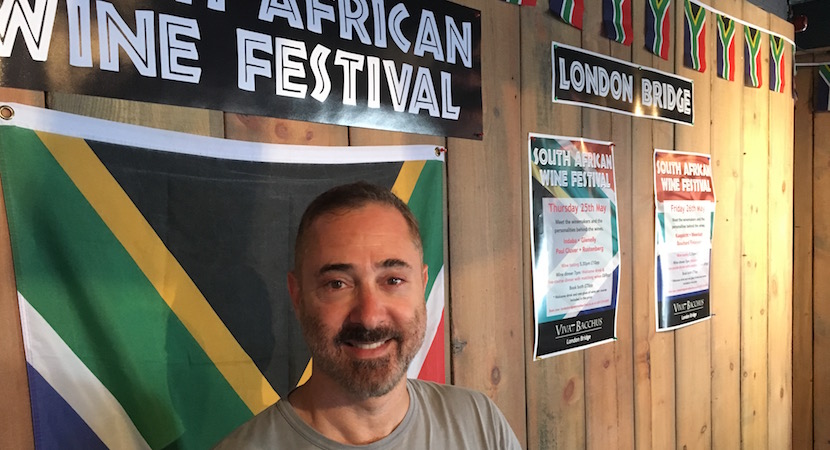 I first met British film maker Anthony Fabian in London two years ago. At the time he was hoping to soon put the finishing touches to a series of eight documentaries he expected would help rebalance the awful global image of South Africa. We engaged a few times thereafter, contacts which providing me with a window into the financial challenges which artists like Fabian face. After an initial kick from FirstRand, the Good Hope project struggled to attract enough support from other South African stakeholders. Eventually it was only through the cash injection from two movie makers in California that the project was completed. But it’s now in the can and a full length movie has replaced the proposed documentaries. I caught up with Tony on Rational Radio. – Alec Hogg

As promised we’re now with Anthony Fabian, a British film maker who’s had a long journey with the Good Hope Project. Tony good to be talking with you. Are you in London at the moment.

I am indeed yes. Right in the heart of London.

We met for the first time a couple of years ago. Bumped into each other from time to time in the city while I was living there. You really did struggle to get this project of yours funded. There were going to be eight documentaries, you’ve now changed it or turned it into a feature length movie. Just give us a little bit of insight on what motivated you to do this in the first place.

The simple answer is a love for South Africa, which I developed through making a documentary called “Township Opera” in 2001. It was about giving opportunities to singers from the townships to sing opera and music theatre at the Spier Music Festival, and then my first feature film was a film called “Skin”. This told the true story of Sandra Lange a coloured girl born to white parents – Afrikaners during apartheid. So I got to know the country very well across those two projects. As I continued to visit the country I found that there was a huge disparity between the way people spoke about it and the way that I felt when I was there and I wanted to explore why people were generally so pessimistic when talking about the country’s future. All I could see was development, growth and a younger generation that were extremely impressive. That’s what really motivated me to make “Good Hope” which is now a feature length film as opposed to an eight part series.

But it did take a while to get the funding.

Well it’s partly because the kill was part of the disease or whichever way around you want to put it. The problem is that people do feel negative about South Africa. So it was hard to find backing for a project that was offering a different perspective even though people said we need this. Very few people actually put their money where their mouth was. FirstRand Bank did help us in the very beginning and were wonderful. We were able to do all our initial research thanks to sponsorship from them but then, from thereafter it really had been a massive struggle. Interestingly, the money to complete the project has come from outside of South Africa, which is extraordinary to me because the greatest beneficiaries of this project will be South Africans.

That’s interesting. People in South Africa weren’t prepared – even after the end of the Zuma era and Ramaphosa had come in. Why was it that the good news story didn’t catch on here?

I think that despite the Ramaphoria that followed the end of Zuma, It took a while for the business community to feel confident. I think the recent elections in South Africa have actually done more for that confidence than simply the removal of Zuma. There was a time lag between people witnessing the event and actually believing in the result because there was a huge sense of – is this really going to result in change? What’s going to happen? Will he be elected next time when there’s a general election, etc. There were a lot of reasons why confidence has taken a while to catch up with the events.

And the people or organisations from outside of South Africa that put up the money…. What was the motivation?

Interestingly, the last tranche of finance which we needed to complete the film, was somebody who had been a studio executive in Hollywood and thought it was really inspiring . A country inspiring hope in others or being an example to other countries, appealed to him from a purely universal level. This is why he backed that part of the project. The completion funds came from somebody with a marketing, distribution and producing background in Hollywood, who is going to be telling the story of Amy Biehl. I don’t know if you know that story. Sad, but it resulted in an Amy Biehl foundation and they were part of the whole truth and reconciliation process. Some good came from that tragic story – the murder of a Californian activist during the time of emergency. Because this person is engaged in telling that story, she felt that good hope was a good bookend to that.

So what does happen next to the movie?

The next step is we hope to premiere the film at the Toronto Film Festival which will have its premiere in September. I hope it will lead to some cinema distribution across the world. And then of course the usual channels of Netflix or HBO or that sort of streaming Showmax, that kind of streaming availability. We want the film to also have a grassroots marketing and distribution so that it reaches people in townships, people that can’t conventionally go to cinema or don’t have a television. As well as across the education system – both in universities and schools because it’s a very densely packed survey of what’s happening in South Africa today. It encompasses things like the rise of populism, it encompasses land issues, it encompasses gender imbalances and racial issues, job creation, education, all of the key subjects that I think South Africa is grappling with right now. And it offers not only the problem but the solution. So I think it’s hopefully something that will be of great value. Educationally and inspirationally.

Anthony Fabian is a British filmmaker and his Good Hope Project has finally been put together as you heard. Interesting that South Africans weren’t there to get it over the line but get it over the line he has. We spoke a lot about making movies and even when you’re as talented as Mr. Fabian it’s not a walk in the park. It’s going to the film festivals. It’s one of those movies that you just got to keep watching. You start off with everything being a little difficult but the solutions are there.

Anthony Fabian a Brit who’s done a good turn for this country.