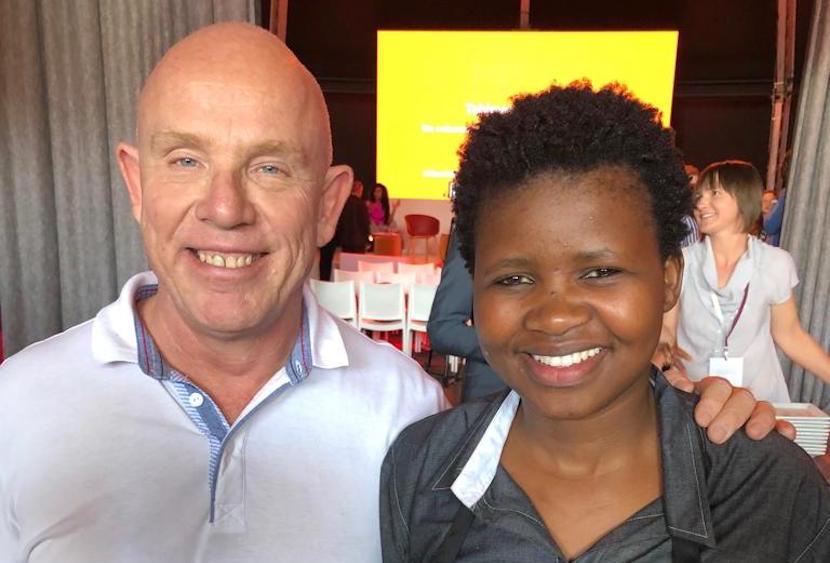 Gary Hopkins tells me the difference between social entrepreneurs and their vanilla alternatives is that they measure success in terms of jobs created rather than profit generated. And by that measure, Hopkins’s mushrooming I Love Coffee enterprise is roaring. After popping into the nearby offices of DeafSA one day, Hopkins decided to focus his efforts on building a business to help the hearing-impaired, creating a company which only employs the deaf. We met at the ABSA Dome at WEF Africa where one of the special baristas, Thuliswa (pictured) delivered a decaf cappuccino as good as any I’ve ever tasted. Prepare to be inspired. – Alec Hogg

I’m here with Gary Hopkins in the ABSA Dome at WEF Africa. Gary you’ve got a most unusual coffee stand with baristas who are unusual in that that they’re all deaf.

That’s correct. We are called “I Love Coffee”. We’re a social enterprise and 85% of our staff are deaf, both the baristas and kitchen staff.

Why did you focus on deaf people?

Because deafness is a disability that people forget about. And most deaf schools don’t really teach subjects that help people get a job. No maths, science, history, geography, biology and economics.

What do they teach?

They teach basic literacy and some life skills and most of them are taught to trade, so you get a lot of people coming out who are cleaners or maybe upholsters. So it’s really very difficult for them to bridge the gap to get into the workforce. Furthermore sign language isn’t recognised as a language in hearing schools so no one’s taught sign language. So you’ve got this huge divide between hearing and deaf.

So when you start off you’ve already got a disadvantage being deaf and then you get into the system and no one understands you. How did you learn about this?

I lived in Newlands and near DeafSA and one day went in there and asked what are the challenges facing the deaf community and they told me and it seemed to be an obvious solution.

I’m one of those weird people that problem solve on the moment. I thought everyone wants coffee, and if you want it bad enough, we will serve you coffee and along the way you’ll learn a bit of sign language. We’ve bridged the gap and created jobs.

So how do you actually order a decaf latte rather than a double shot expresso?

First and foremost we’re a coffee shop and we didn’t want to make it difficult for the customer so we designed numerous ways for you to communicate. You can point at a menu, write it down, use the blocks we made available and if you want to use sign language, we have instructional videos right next to the counter and you’ll learn to sign. If you want a Latte, you show the letter L and make as if you are washing a window. Thats how simple it is.

You’re here at the ABSA dome. You are being exposed to people who perhaps wouldn’t see this otherwise. How have they reacted?

Very positively. It’s always interesting, at first there is the novelty factor but then over the course of four or five days, people have been here more than one day start engaging. It’s not just about the coffee, they are getting involved with the baristas and trying to learn more signs. That’s very positive for us as we’re all about inclusion. When you look around us at the other waiters and other companies, the integration is amazing. Everyone has embraced our staff with open arms. And it’s a two way learning street.

Do you employ your staff straight from school?

We have absolutely no minimum entry requirements. Some of them come straight from school and some have been out of school for years sitting at home. We have success stories, one of our first baristas had been sitting at home for six months unemployed. He was one of the first we taught to make coffee. He then became our head trainer and now he’s a chef. He’s been with us for a number of years. So those are the kinds of stories we tell. We don’t discriminate on any level. We’ll get you in and we’ll get you going.

You said a chef, so you’ve expanded out of not only just coffee?

Correct, we are in quite an expansive space at the moment. We have three sites in Cape Town and two in Johannesburg, one of which is WeWork, an office sharing space. They’ve chosen us as their coffee supplier. So wherever they expand, we expand with them, supplying baristas, coffee and food services. We are also setting up central kitchens, which allows us then to expand our training in most sites.

When you say sites I understand WeWork, although they’ve only opened one?

Yes, but they are about to open a second one next door to us in Cape Town. You will find an “I Love Coffee” in 78 Strand Street, inside Virgin Active head office, inside Publicity Machine in Harrington Street, one in Nelson Mandela Children’s Hospital in Johannesburg and WeWork.

Yes for my sins. I’m a social entrepreneur. I like to make that distinction.

What is that distinction?

The distinction is that making money for yourself is one thing. Making money that has an impact on someone’s well-being is really what we want to do. We measure our impact purely on the numbers we employ. That’s really almost our sole measurement though profit is part of it and all profit goes back into the business.

So what numbers are involved?

At the moment we have about twenty three full time employees and about five or six currently training to come into the organisation. Our goal is to have about fifty five people employed by the end of next year and a training facility training another fifty. We want to have triple digits by end of next year.

It all came from walking into DeafSA?

It all started with the coffee. It’s that’s simple.

It’s quite an expansion plan that you are laying out for yourself. Are you anticipating that you can put some of your baristas into other coffee shops?

Yes, I will answer this question two ways. One is we train our baristas so that they can work in other brands, such as Vida E or Seattle. We follow exactly the same system of order processing. So that’s easy, but what has been fantastic for us is that through our relationship with Virgin Active, we’ve been selected by the Branson Sense of Entrepreneurship as their first sort of showcase SME and they’re relaunching themselves and committed R3m in helping us grow. So we’re under a wing of Richard Branson which we are very thrilled about.

How did ABSA find you?

Through a mutual friend. To be honest we didn’t anticipate the reaction we’ve had from ABSA. They aren’t our bank. They will become very shortly because they’ve been so supportive of what we’ve done. They have filmed videos for us and arranged interviews. They’ve been so supportive and we couldn’t be happier with this. This is the kind of partnership we need to grow the organisation.

Gary lets say there are 100 barristers that you’d have in the organisation in a year’s time. But how many deaf people are there in South Africa and how many of them won’t ever get a chance to get employed.

It’s hard to judge exactly because figures aren’t really kept that well. In South Africa we don’t test Deafness at birth so it’s often picked up late. But about 5% of our population is deaf and between 70-80% of all deaf adults are unemployed.

Wow. You’re talking about millions of people. When you apply your entrepreneurial mind lying in bed at night thinking about other opportunities is there any anything else that comes to you.

Absolutely. So once we have our training facility in place we want to look at expanding in the manufacturing area. We were looking for funding for a roastery that’ll employ a whole lot of people and then we’re going to start manufacturing in our commercial facility. In our training facility we want to open up coding for example which is perfect for a deaf person to learn and there’s a huge demand for coding jobs. We also have sort of a strong environmental bent. We hate waste, plastic and waste are our enemies. There’s a lot that can be done with coffee waste. So everything from making a body scrub through to bricks that become housing to fire logs. You can grow mushrooms in coffee waste and that’s an area where we want to expand and there’s a huge opportunity for employment as well.