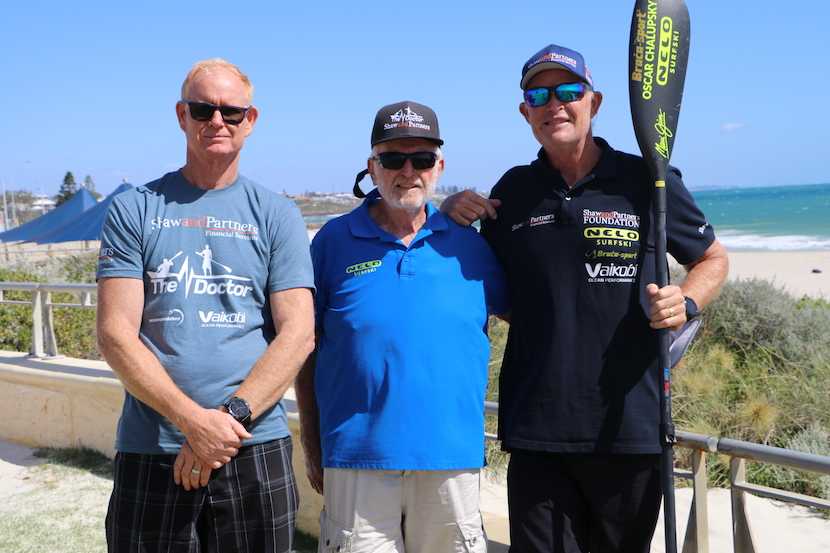 Surf-ski achievement in South Africa, and globally, has become synonymous with the Chalupsky name – but nobody could have predicted how long paddling pioneer Paul Chalupsky would keep going. At 82, he’s just completed the famous, gruelling 27km ‘Doctor’ ski-race from Rottnest Island to Sorrento Beach in Australia – and there are no surf-skiers left alive to even compare his achievement to. The race, off Perth, took place in 25 knot winds and Paul’s spring chicken partner, George Green, 65, seemed to take more strain than his wiry doubles’ partner. There were 96 rowers who finished behind them. The Chalupsky family is star-studded with iron-men, rugby stars and epic, long distance canoeists, Paul having birthed the modern light-weight sea-going canoe whose marketing world-wide has turned him into a millionaire entrepreneur. As veteran sports writer expat and former Cape Times colleague, Dale Granger whose life-time of covering South African sportsmen and women is richly demonstrated here implies, the Chalpusky’s are a case study in the nature versus nurture sports debate. Is it their incredible DNA or their iron-willed discipline and dedication to their chosen sport that has carried the SA flag so high for so long? Probably a combination of both. – Chris Bateman

At the age of 82-years-young, Durban paddling pioneer Paul Chalupsky eclipsed his legendary sports star son Oscar on Saturday by taking on and taming turbulent seas and wild winds gusting up to 25 knots in the Doctor surf ski race off Perth.

At the same time that South African-born Australian cricketer Marnus Labuschagne struck his first Test century, in Brisbane, 4,500km to the west of the Sunshine State capital another proud South African sporting bloom was beginning to sparkle.

One hour and eight minutes after three-times Doctor race winner Oscar had finished 34th in his single ski, Paul and his old Durban buddy George Green, 65, hit the beach in their double, completing the 27km crossing from Rottnest Island to Sorrento in 402nd position out of 498 starters in a time of 2 hours and 53 minutes.

A week earlier Paul had completed a 20km training paddle off Perth in a single-ski accompanied by Oscar and his younger brother, Walter, who also paddled the Doctor and finished 61st in just under two hours.

Spectators on the beach and fellow paddlers were in awe of Paul’s achievement and marvelled at the fact that there is no category in global offshore races for paddlers over the age of 80, simply because there are no takers.

That’s because, as Paul remarks with a hint of nostalgia: “There’s no-one left. Most of them (my old rivals) are in the cemetery or can’t walk, let alone paddle anymore.”

“It was tough in the conditions,” he said of Saturday’s race. “George wasn’t in the greatest shape, but we made it,” he added, before joining the party to congratulate Australian Cory Hill beating Capetonian Nicholas Notten in the men’s division by 32 seconds in a time of 1hr 35mins.

Paul may in fact have few peers in world sport longevity, particularly when it comes to gruelling endurance feats, considering he still paddles offshore Durban several times a week, cycles, goes to gym and earlier this year finished second in the over 70s class in the world famous Sella Descent in Spain, an annual 15km canoe race that attracts over 1,000 entrants.

The Chalupsky family should perhaps donate their bodies to scientific research considering that at the other end of the age spectrum Oscar, at age 15, won both the junior and senior lifesaving ironman titles in South Africa. In matric he played Craven Week for a Sharks rugby team that — in an era preceding Tony Watson’s famous try in the Currie Cup Final in 1990 — beat the Bulls at Loftus at a time when Northern Transvaal were never beaten in Pretoria by Last Outpost Souties.

At age 15 Oscar competed in his first Texan Challenge surf ski race from Port Elizabeth to East London in a double with Paul and came second. He returned in a single ski at age 17 and beat Tony Scott in the tough, 250km four-day endurance epic and never looked back. Going on to remain unbeaten in the race for the next 18-years.

Oscar also beat legendary Australian ironman Grant Kenny in his first 56km Molokai race off Hawaii to the island of Oahu, which he regards as his greatest sporting accomplishment; a close second to his 12th win in the race at age 49, eclipsing his selection as South African Olympic captain on the country’s return to the Olympics in Barcelona in 1992 and reducing his golf handicap from 24 to scratch within a few short years.

And in 1976 Paul, who had arrived in South Africa in 1957 as an immigrant from Germany, paddled a double surf ski with Tony Scott from Clifton to Durban in 29 days. Off remote parts of the country, the two men covered more than 100km a day around a coastline so treacherous that Chay Blythe, the first man to sail non-stop around the world “the wrong way”, described the South African seas as the most vicious he had encountered on his circumnavigation.

Paul simply shrugs his shoulders when asked whether genetics, diet or just a fired-up desire has kept the flame of his longevity burning. It has to be noted, however, that his mother, Helena, is still alive and living in Germany at the age of 103.

Paul only retired six years ago from his job as a tool and dye maker and says he’s never been particular about what he eats.

“I’ve kept at it all the time. I did a hard days graft every day and four times a week I paddle in the sea off Durban and gym and cycle too.

“I keep paddling because I don’t want to look back over my shoulder one day and have any regrets. So while you can still do it, just go for it,” he says.
But perhaps the greatest legacy of the Chalupskys is reflected in the history of the sport itself, as opposed to the individual or collective performance of the family.

William Webb Ellis may have picked up a football and famously run with it to start the sport of rugby. But South Africa can lay claim to the creation of surf ski paddling, considering the world’s first ski, or prototype, was shaped by Paul and Tony Scott in the Chalupsky’s Westville garage. What emerged was a faster, lighter and narrower long-distance, ocean racing extension of the Australian spec ski, which is used for close shore lifesaving events.

Today South Africans, led by third-generation torchbearers such as Hank McGregor, Sean Rice, Dawid and Jasper Mocke and Hayley Nixon, are the best in the world with Australia a close second. Over 50 South Africans, comprising 15% of the fleet, competed in the Doctor and most of the skis used in the race were export earners out of South African factories.

From the first Oscar in the swinging 60s, the sport has mushroomed into a multi-million dollar enterprise. About 5,000 new surf skis, retailing for $3000-$6000, are sold annually, grossing about R220m in sales.

And of these about 30-40% of the market has been captured by South African companies, a crucial foreign exchange export-earner for the South African economy from globally acknowledged brands such as Fenn, which has its factory in East London, and Revo and Carbonology, both based in Durban.

That’s some epitaph from the day when Oscar Chalupsky first paddled off Durban’s North Beach at the age of 8 – only to watch stunned as a Zambezi shark came straight for his ski and then dived underneath it – on a voyage towards becoming the greatest surf ski paddler on the planet.