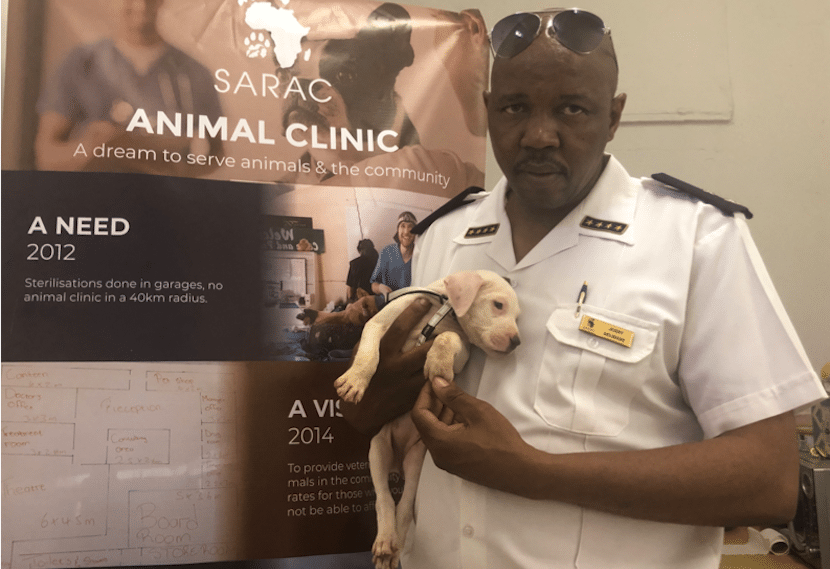 Mahatma Ghandi advocated that the greatness of a nation and its moral progress can be judged by the way its animals are treated. Jerry Selwane, founder of the Soweto Animal Rescue and Advisory Centre (SARAC), is providing the means for our youth to carry out this legacy. During his 18 years of working for the SPCA, Jerry was exposed to the abuses animals had to endure due to ignorance and misinformation. Although the SPCA was doing its best, Jerry realised that an animal rescue centre was desperately needed in Soweto. He took his life savings and opened a small centre where he gives hope to abused animals and education to the youth. SARAC now has a small army of Rangers, the youth who have become his eyes and ears in animal cruelty cases. SARAC are authorised to arrest and prosecute, which they are not afraid to do. The need for his services is growing, and resources are a big challenge but Jerry, undaunted, continues every day to make a difference to animal welfare and the moral progress of the youth. – Vanessa Marks

I’m with Jerry Selwane. He’s the founder and CEO of the Soweto Animal Rescue and Advisory Centre. Jerry I believe that this is the only animal rescue centre in Soweto is that correct?

Yes, SARAC is the only animal rescue centre in Soweto.

It’s quite a daunting task to take on something like this. What made you start an animal rescue centre?

I had been employed with the SPCA as an inspector for 18 years however I could not pursue my goals and vision so I founded my own centre. My vision was to create a place that could help animals as well as educate people against cruelty to animals, and change people’s attitude towards animals.

How do you go about educating the public?

We visit schools, libraries and community centres. We also enlist the help from township children which are affectionately known as “Jerry’s Rangers”. These are kids ranging from the age of 7 up to 21 years. We empower these kids with skills and give them something to do to keep them off the streets. We teach skills such as dog training and animal behaviour. After school they will also assist the community by walking dogs and helping where needed. They also are the eyes of SARAC. If they see or hear of any animal abuses, they send me a message so that I can attend to the situation.

And do you find that is helping them change their attitude towards animals?

The best way for you to change the world is by educating the young generation, especially if you want to create a generation that values both human and animals.This has been a very successful operation. These children are fighting against animal cruelty. They don’t turn a blind eye to cruelty, they won’t put their life in danger but they will do the right thing and call me.

When you are confronted with animal abuses, what do you do?

We have legal powers. If there’s a need for us to effect an arrest we will arrest a person. If we are required to go to a magistrates court to obtain a warrant, we’ll do that. Some cases are very severe and that we have to do an immediate arrest, and take the abused animals for medical care. We then have to compile the necessary documents in terms of the law.

How do you cope with housing animals, rescuing them and ensure the paperwork is done.

I don’t want to lie to you. It is very, very hard work and emotionally draining because we often find animals in a terrible state. It’s difficult not to breakdown but we have to be strong for the animals. We are their voice and defender. So we try keep our composure. We house the animals, use private vets, and ensure they get medical treatment. We are busy building a clinic to provide this treatment.

Yes, it is a challenge to obtain a warrant jurisdiction authorisation. Then the next challenge is to confiscate the animal, find shelter, ensure medical care, socialise them and find a home. The medication is costly, besides the trauma, we have to sterilise, chip and vaccinate them.

You need a lot of resourcing and a lot of funding.

It is a very daunting task. We are finding this is the biggest challenge in the country. We are not funded by the government, we rely on the companies and the public for donations. We have some loyal supporters that keep our doors open.

And how would you find new funders.

We appeal to companies, and manufacturers of pet food. Donations are claimable from tax.

In 2017 we won gold in the FNB Rookie Business of the Year Award. This made history as we are not a business. In 2018 I won the Animal Talk Hero award. This year I won the SADAC Global award and the Pan African Region award. I have been nominated for the Pan African Continental Award for 2020. These awards are due to the job we are doing for animals, risking our lives to ensure they are safe. I left the SPCA to realise this vision I took all my savings to fund this. We have been going for 9 years, and we are really making a difference.

That is really very encouraging to hear and that’s what the Good Hope project is all about. We wish you all the best for the future.