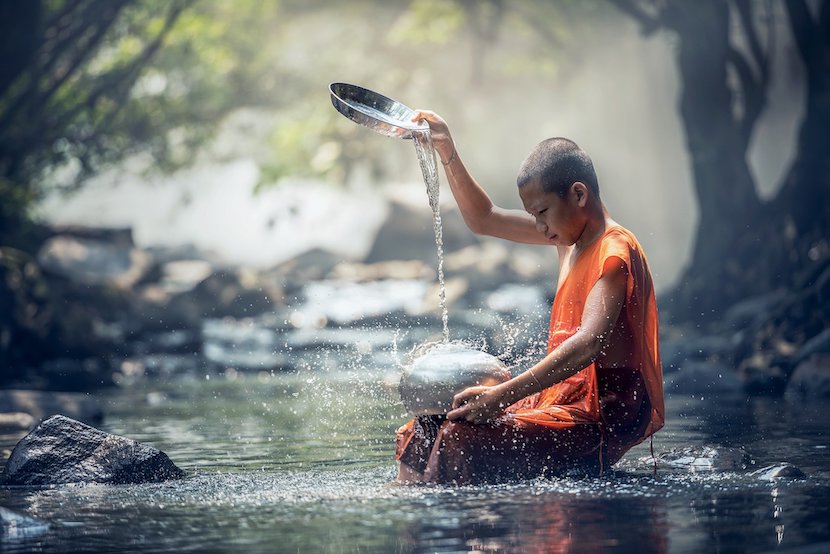 Pete van der Walt’s moral money series introduces us to the world of faith and finance. He promised to journey from the ancient folk religions of Africa, to the Abrahamic faiths (Islam, Judaism and Christianity) and the Eastern religions of Hinduism and Buddhism. In this piece, he outlines 7 moral money principles from Buddhism and adds that he was surprised to discover just how useful it could be to the lay person. In thinking, life and money. This article was first published on FirstRand’s Perspectives. – Lindiwe Molekoa

With over 520 million adherents, Buddhism is the world’s fourth largest religion. Originally an Indian religion, Buddhism has spread and taken on the character of several of its host cultures… from the saffron robes of the Theravada Buddhists in Sri Lanka and India, to the Mahayana traditions of China and Korea, the Zen Buddhism in Japan, or the Tantric Buddhism of Tibet.

Buddhism flowed out of Hinduism in much the same way that Christianity flowed from Judaism.

It began with the life and teachings of a prince from the Sakya clan, Siddhartha Gautama. Buddhism is a different religion from many of the others in that its central preoccupation is not divinity, but humanity.

It is a religion about thought and thinking – rather than spirit and emotion.

Buddhism has entered the pop culture, with popular little Buddha statues of various types adorning the gardens of people who may or may not know anything about the religion – and practicing Buddhists and non-Buddhists alike find tremendous value in the teachings and practices that the Buddha and various Boddhisattvas (like Buddhas but sticking around to help the rest of us along), have brought into the world.

Buddhism may not seem like an obvious source of principles for personal finance at all – with its detachment from materialism, its focus meditation and chanting, and its extinguishing of desire (kamma) in the human being… but I was surprised to discover just how useful Buddhism could be to the lay person. In thinking, life and money.

Some modern interpreters view Buddhism less as a religion and more as a series of mental disciplines and moral ideas. The foundational scriptures of Buddhism – elaborated upon greatly by later schools but still considered authoritative by most Buddhists − is known as the ‘Three Baskets’. While Sanksrit was the Latin of its day in the Indian subcontinent, Buddhism’s original scriptures were written in Pali (the language of the people). The Three Baskets is also known as the Pali Canon. This consists of the Sutta (written as Sutra in Sanskrit) – a collection of the wise sayings of the Buddha, the Vinaya – which lays out the rules for monks and nuns, and the Abhidhamma (Abhidharma in Sanskirt) – which many consider to be a manual on psychology as much as an exposition of doctrinal ideas.

The Buddhist journey is aimed not at salvation but at enlightenment. It views humans as inherently suffering (dukkha) in a wheel of birth and rebirth (samsara), due to ignorance. It prescribes mindfulness, calm reflection, accurate perception and non-violence as a cure for this suffering. It teaches that each individual can, through meditation and reflection, see the truth of things and liberate themselves from pain and suffering caused by incorrect thinking and perceptions. The aim isn’t to please Buddha, but to become a buddha.

The process can be summarised in the Noble Eightfold Path: right view, right resolve, right speech, right conduct, right livelihood, right effort, right mindfulness, and right meditation. This moral code is sometimes seen by Western students as similar to the Ten Commandments – but it is less of a set of rules than it is a set of important subject areas to be explored further with regularity and fervor. The ‘right view’, for example, is not a single defined view that the believer must consider correct and follow, but a resolve by the practitioner to investigate – and to constantly strive to find the right view for him or herself, by testing, exploring and contemplating deeply.

Seen in its correct context, Buddhism then in fact not only influences correct financial decision-making but may provide a foundational system for a moral financial approach in the first place.

Those interested in learning more about Buddhism can choose from a wide range of potential sources, each strongly influenced by the particular expression of Buddhism, be it Theravada, Pure Land, Tibetan or Zen. One good source is the book Buddhism, by Christmas Humphreys. I don’t know if it is still in print, but it provides a thorough and neutral discussion of the religion and its principles. The Gospel of Buddha by Paul Carus was written in a style to make Buddhism accessible to new Western audiences. Another informative, if slightly more technical, source is Zen Therapy by David Brazier, which explores Buddhist Psychology as found in the Abhidharma.

Getting the mindset right

To think before you do something is sound advice generally, but perhaps a culture of conspicuous consumption can learn a double lesson from a single teaching. In Buddhism, everything begins in, and with, the mind. Applying thought, and forethought especially, is a critically important skill in the correct allocation of resources, or when making purchases. Automatic, thoughtless spending is likely to lead to tears. When the Buddha attempted an ascetic existence, he heard a song teaching that ‘the reed which does not bend, breaks’. This left him with a powerful lesson and enabled him progress. Buddhism does not teach fanatic devotion to discipline… it advises moderation in all things.

Ever hear the joke about the Buddhist monk that ordered pizza? ‘Make me one with everything.’ It’s not very funny, but those who crack a smile understand that Buddhism has a major appreciation for the interconnectedness of things. What happens in one place affects another. What one person does impacts others. Carefully considered actions, grounded in compassion, executed calmly, is far more likely to lead to positive consequences. Thought leads to action, action to consequences. Consequences, in turn, may cause thoughts to arise. Arrest the thought, consider where it leads – and do the same with actions. This will improve outcomes.

Another bad joke: Have you heard about the Buddhist vacuum cleaner? It comes with no attachments. Buddhism sees reality itself as phenomenon – and like all phenomena, it is born, grows, decays and dies. The feeding of one’s ego with prized possessions is unlikely to have positive effects, long-term. That dream house, dream car, fancy boat and designer outfit will not outlast time. There is a difference between ‘cost’ and ‘value’ – and by being calm and detached, the Buddhist is prevented from making several expensive mistakes. You are not your stuff. Nor are you defined by them. You are not your baggage, your hang-ups, your circumstances, your network, or even your ideology. These are all mere phenomena… and giving them the correct place in the scheme of things is important if you want to be liberated from vicious cycles.

Giving alms to the poor and supporting the monks and nuns in Buddhist cultures, is an individual and collective responsibility. The Buddhist community − known as the ‘sangha’ – and everyone that makes up the sangha, should attempt to alleviate suffering where and when it can. Material possessions have little value… money itself is an entity without thought. Sentient beings’ matter, and practicing loving-kindness is incumbent on anyone who chooses the Middle Way. The Pali word is mettā; it translates, in equal measure, as benevolence, goodwill, amity, friendliness and an active interest in the wellbeing of others.

‘Gain is illusion, losing is enlightenment.’ Many consider Buddhism to be a constructive process. That is, you set off on a journey and gradually add wisdom until you achieve enlightenment. This linear process is not accurate, in the Buddhist sense of the word, which understands life and the universe in a more cyclical, circular way. Several parables exist that describe enlightenment as the exact opposite process. Success, happiness and insight does not depend on anything being gained as much as it depends on losing what covers or obscures the purity beneath or stands in the way of the natural flow of things. In a consumerist culture, you are what you own, and what you own actually owns you. Buddhism advises a lifestyle that is sparse, decluttered and empty of needless distractions.

We are all born into endless cycles of painful birth and rebirth – until we ourselves put a stop to it. Whatever the circumstances of our birth, Buddhism describes that as our karma. You are born with certain advantages and disadvantages. You are born into a time, place and social setting – which may be a source of assorted pluses or minuses. However, Buddhism attempts to at least ensure that, be your circumstances positive or negative, they are not sources continued error. The blame, in Buddhism, can never be placed on others. All responsibility ultimately vests in the ‘self’.

I place ‘self’ in inverted commas for a reason: because Buddhism’s most radical religious concept – its game-changing idea, if you will − is that of anatman. The Hindu religion, in which the Buddha spent his formative years, teaches the concept of a soul, also called the Overself, or the Atman. Buddhism proposes the opposite: No Soul, No Self, No Ego. The very negation of Atman: Anatman. Selfish, egotistical behaviour makes no sense in such an epistemology. Be kind, be calm and see where you can help alleviate suffering, and you’d be well on your way to becoming wiser, smarter and happier – according to Buddhist principles.