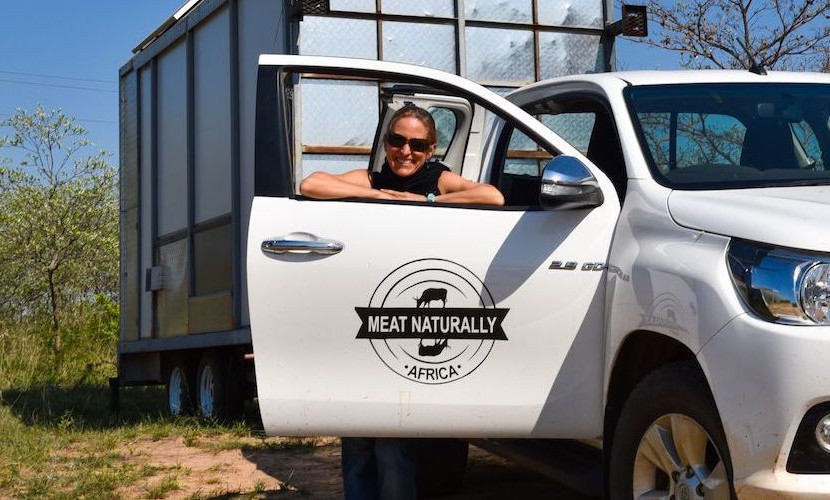 Here’s a story that will lift your spirits. Meat Naturally, an Mpumalanga-based social enterprise, is helping thousands of communal farmers create a livelihood. It has plans to expand its innovative approach to environmentally friendly livestock production across Africa. This week, it was awarded joint first place in the 10th SAB Annual Social Innovation Awards – and a grant of R1.3m that will help with delivering on these ambitious dreams. Speaking to BizNews is Sarah Frazee, one of the founders of Meat Naturally. She shares how to create sustainable food production in rural areas. – Jackie Cameron

So Meat Naturally is a business that is owned 100% by farmers, but operated by conservationists. What we do is we work in communal land – those are lands where there is no single title deed. It’s the areas that people often refer to as the tragedy of the commons, where people are grazing – poor, rural communities in Africa – are grazing their livestock.

Because everybody’s making a decision based on their own household, it’s collectively leading to degradation and overuse of the land. That really has negative impacts on the wildlife that they are often adjacent to. So within Southern Africa 80% of the landscapes are rangeland.

For 2,000 years, pastoralists and wildlife used to graze these lands in a way that was quite harmonious. As communities settled down, we were no longer able to follow the rains the way the wildlife does – then you ended up having significant negative impacts on both communal farmer livestock, but also on the lands and wildlife living in that area.

Our goal is to take regenerative practices and the principles of what’s called holistic livestock management, which is about looking at the way wildlife would have grazed through an area.

On how the process works:

At the moment we’ve got about 2,400 farmers that are part of the system. The way it works is we start at the beginning of a grazing year and we set up what the grazing agreement should look like. We help them put together the vaccination. We provide vaccinations, nutritional supplements – things that enable them to implement that grazing plan.

We then monitor the impact of the grazing plan. We use a remote sensing system that allows us to detect the amount of biomass in an area. We can see if all of the animals are where they’re supposed to be. We also use professional herders and also send georeferenced WhatsApp pictures that allow us to see where the animals are at any given time.

If everything has gone well – and the environmental impact that we as Meat Naturally want to see happens – then what we do is we reward that with market access. We bring mobile auctions in. Our application to the SAB award is a new mobile abattoir. We actually have used  a mobile slaughterhouse in the past and it worked really well. But we want to get a new unit that’s going to allow us to expand production along the Kruger National Park border – which is a real high impact area of conflict between wildlife and livestock farmer.

On how many farmers are being helped:

We’ve got 2,800 farmers that are co-owners of the business. With the new unit will be adding about 600. The potential for Meat Naturally’s work is about – if we look at all of Africa – 50 million pastoralists on communal lands.

The [farmers] are doing more than generating a living. They’re doing so well. The meat price is really high at the moment and this year’s turnover was about a €1 million, that has gone to about a 1,200 households. It’s because of the quality of their animals – they’re basically getting commercial type animals off the landscape. Whereas four to five years ago, their baseline was zero. They couldn’t sell their animals into the formal market because they were too malnourished and full of disease. We’ve been able to really transform that with them.

On her involvement in the project:

It was conservation. It was a really recognising that with climate change, setting up protected areas was not going to be what helped achieve long-term conservation. Particularly given that conservation areas are often in poor areas, where there is this tremendous conflict with livestock.

Livestock farmers living adjacent to wildlife area lose between 10%-20% – sometimes 30% percent – of their herd to predators that get out through the fence sometimes. If they’re not losing them to predators, they lose them to diseases that are coming from wildlife. There’s tremendous animosity between the two. Promoting this coexistence requires a significant investment initially.

But if you can get collective grazing across a village, over time it more than pays for itself. I have an economic background. I’ve always done conservation enterprise. Since 1995, I’ve been working with the business and conservation interface, across a whole bunch of spectrums and sectors.

2013 is when I landed in the meat space and have really found that this is an area that can really be transformational. There’s a lot of work that can be done in conservation across mining or other agricultural products. But for Africa, 60% of the landscape is used for livestock grazing and wildlife grazing. If we can find a way where we can make those two land uses harmonious, then what a win.

It really can be a unique and transformative space for Africa to become the breadbasket for the world – or the meat basket, I should say.