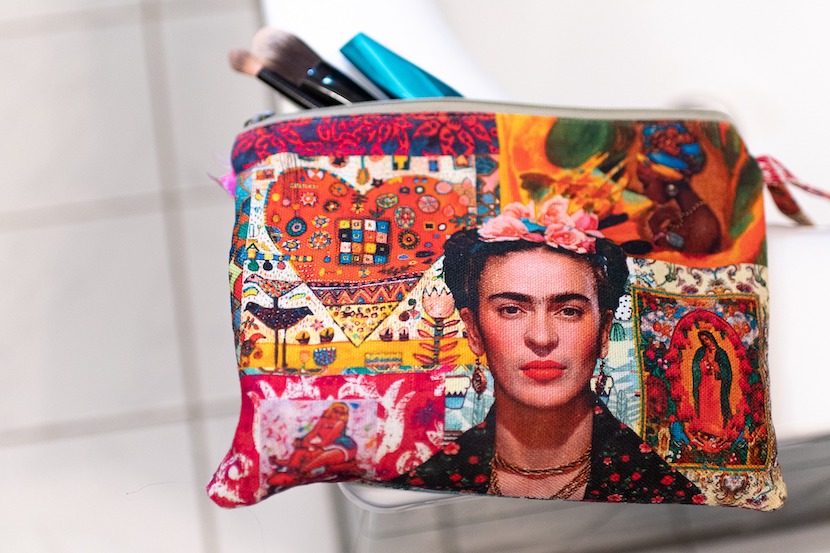 Today Frida Kahlo’s unibrow can be found represented on clothing, stationery, home decor and even flatware. Many know Khalo as a flamboyant woman who smoked, drank, swore and wore pants when these things were unthinkable for the fairer sex. Frida fought many demons in her lifetime including sexism, racism and physical disability. She is immortalised as a vibrant woman with flowers in her hair but behind the iconic imagery lies sadness and struggle which gave Frida Kahlo a bitter hardened edge. Kahlo cut through oppression, discrimination and self-doubt to find herself and inspire generations of women. This article was first published on FirstRand Perspectives. – Melani Nathan

A will of steel

Legendary artist, feminist icon, playful exhibitionist, champion of Mexican culture … Frida Kahlo has been described in many ways. But despite her passionate persona, much of her life was marred by deep, physical pain which dominated her powerful portraits.

It’s ironic that Frida Kahlo, considered one of Mexico’s greatest artists, was more famous in the United States than in Mexico for a long time. And her real rise to fame occurred almost 50 years after her death.

Kahlo was side-lined for many reasons – she was a woman, she was born of mixed descent into a conservative society, she battled with a damaged leg after contracting childhood polio and later suffered severe injuries in a bus accident that resulted in over 30 surgeries during her lifetime. However, she never let these limitations dictate her life and her flagrant disregard for rules is what enabled her to be true to herself. Her confidently unconventional image was perhaps an attempt to distract from her physical constraints. As an adult, she sported a unibrow and moustache which she tidied with a small comb and she exaggerated her facial hair in her paintings. She was often photographed in masculine outfits, with a glass of tequila in her hand and a cigarette in her mouth. She could drink most men under the table and her diet of candy, brandy and cigarettes eventually decayed her crooked teeth beyond repair. She had two sets of dentures – one solid gold and the other studded with diamonds.

Magdalena Carmen Frieda Kahlo y Calderón (she dropped the ‘e’ in her name in 1922) was born in Coyoacán, a town on the outskirts of Mexico City, on 6th July 1907 into an upper-middle-class family. She was one of five daughters to Guillermo Kahlo (two of which were with his first wife). She adored her father but her relationship with her mother was uneasy. Beautiful but illiterate, Matilde managed the household, and Kahlo clearly had ambitions for a better life than her mother.

Kahlo had her first exposure to physical challenges at the age of six when she contracted polio. She was bedridden for nine months and in that time became somewhat isolated from her peers and was often teased on her return to school for her ‘peg-leg’. But she was strong-willed, not to mention smart and artistic. Her father showered her with books and taught her how to take and develop photographs after her lengthy convalescence to distract her.

At 15, Kahlo enrolled in the prestigious Escuela Nacional Preparatoria with the dream of becoming a doctor. It was here that she met her first boyfriend Alejandro Gómez Arias. On their return home from school one day in September 1925, the bus they were travelling in hit a tram. Several passengers died, Arias sustained minor injuries while the 19-year-old Kahlo miraculously survived, despite an iron handrail impaling her through her pelvis, fracturing the pelvic bone, and puncturing her abdomen and uterus. Her spine was broken in three places, her right leg in 11 places, her shoulder was dislocated, and her collarbone was broken.

Her life was shattered in more ways than one. She was in a plaster body cast for a month, followed by bed rest, which turned into a two-year sentence. Her plans to become a doctor were shelved, her boyfriend moved on and the medical bills kept on coming. Her parents called on more doctors to treat the chronic pain, only to have them contradict the previous doctors (which became a frustration throughout her life). Additional surgery, another cast and more bed rest followed. Kahlo dropped out of school and took up painting from her bed to keep herself occupied, having nothing else to do. She was her first subject and so her journey in self-portraits began. She may have felt powerless, trapped at home, an invalid, but her power came through in her brush strokes.

“There have been two great accidents in my life. One was the trolley [tram], and the other was Diego. Diego was by far the worst.”

By 1927 Kahlo was mobile again, albeit still in pain, and she approached Mexico’s most famous muralist Diego Rivera for feedback on her work. A passionate and tumultuous relationship followed, with a marriage in 1929, a divorce in 1939, and a re-marriage in 1940. Kahlo was only 22 when she married the 43-year-old, who already had two ex-wives and three daughters. By the early 1930s Kahlo was determined to make her mark as an artist. Two of her early works – Henry Ford Hospital and My Birth – are considered masterpieces. In 1938, at the age of 31, she made her first sale of four small pictures, at $200 apiece, to the actor Edward G. Robinson. [In 2016, Kahlo’s 1939 painting Two Nudes in the Forest (the Earth Itself) sold at Christie’s for $8 million dollars, a record for her work. Sotheby’s has privately sold Kahlo works for more than $15 million each.]

Rivera seemed smitten with Kahlo’s energy and socially unconventional style. He was not a good-looking man by any means – they were compared to Beauty and the Beast in a New York Times article – but they were a captivating couple, and she was devoted to him in their early years of marriage. He was not to be a faithful partner however and made it clear that monogamy was out of the question. He was known to make ‘studies’ of his subjects for his murals, making short-term mistresses out of them and even had an affair was Kahlo’s sister, Cristina, which was the final straw and resulted in the end of their first marriage. Kahlo retaliated on occasion by seducing his mistresses and pursuing a relationship with Russian revolutionary Leon Trotsky. When Trotsky was murdered in 1940, Kahlo and Rivera, who had now separated, were both suspects. Kahlo was taken into custody for questioning, while Rivera fled to San Francisco.

“I hope the leaving is joyful, and I hope never to return.”

Kahlo and Rivera reunited in San Francisco and married again in 1940. In the years that followed, she painted most of her masterpieces, many of which forced her audience to recognise her physical and emotional pain. The 1950s saw Kahlo undergo numerous spinal surgeries and long periods of bed rest as doctors continued to try to repair the damage from the bus accident and alleviate the unbearable pain she was living with. She underwent over 30 surgeries during her lifetime and eventually also lost her leg, amputated below the knee in 1953. Kahlo died aged 47 in 1954 from a pulmonary embolism.

Since her death, Kahlo has become a symbol of female empowerment and freedom for young Mexican women. “I used to think I was the strangest person in the world but then I thought there are so many people in the world, there must be someone just like me who feels bizarre and flawed in the same ways I do,” she once said. “Young women today identify with Frida; they find strength in her, and they identify with that strength,” says Hilda Trujillo, Director of La Casa Azul, Kahlo’s former home-turned museum. The stream of visitors that still flock there today is a testament to Kahlo’s importance as a Mexican feminist and artist, as well as her iconic status as a woman who championed those marginalised by society.