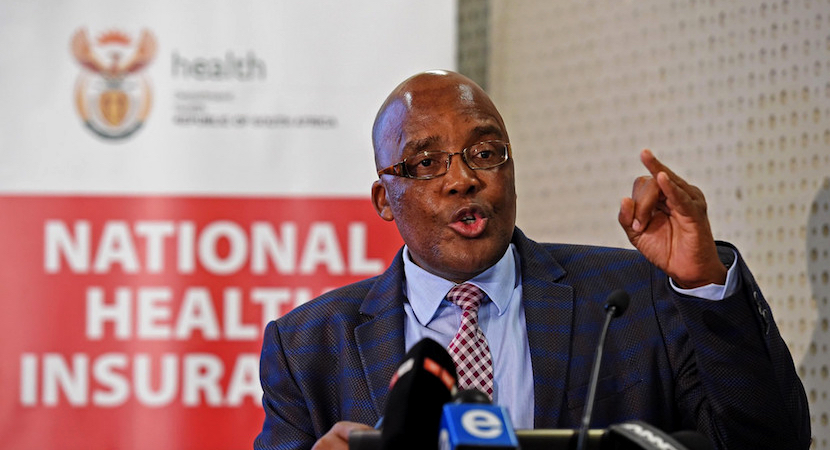 CAPE TOWN — Long standing civil society fears that the controversial Universal Health Care System or NHI bill in its present form will prove unaffordable, premature and degrade South Africa’s world class private healthcare system have been affirmed in a bombshell Treasury letter leaked this week. The two primary political movers in an apparently arbitrary move to accelerate the bill’s progress without proper consultation or considering Treasury concerns are identified as Health Minister Dr Aaron Motsoaledi and Presidential Adviser Dr Olive Shisana (a former Director General of Health). Ignoring a raft of Treasury objections lodged earlier, the pair reportedly finalised a draft submission to cabinet, due to meet next week. While the motivations for the unseemly push are unclear, speculation points to the impending May elections. Treasury have withdrawn their support for the bill, ironically halting Motsoeledi/Shisana’s sideways shimmy in its tracks. The undiluted bill also shifts many aspects of function and budget from provinces to national, addressing one of Motsoaledi’s biggest bugbears – reforming the wayward, disparate federal primary healthcare system. Treasury favours a “more measured, gradual, practical shift of functions between State and private healthcare.” Private medical aids can exhale – for now. This story courtesy of the Daily Maverick. – Chris Bateman

Presidential Adviser Dr Olive Shisana and Minister of Health Dr Aaron Motsoaledi appear to have sidelined senior Department of Health and Treasury officials in preparing a new version of the National Health Insurance Bill for submission to Cabinet.

Spotlight understands that it was only after a four-page letter sent by the Acting Director-General of Treasury that the Presidency again meaningfully involved Treasury in the bill process. According to the damning Treasury letter various provisions in the bill that had previously been agreed between government departments had been changed without consultation or agreed-upon changes were not implemented. Treasury also alleged that comments from the public have not been taken into account.

“Many of these changes are potentially very problematic and require more work and thorough discussion with the Minister of Finance.”

Treasury also said that the Bill is “unfriendly” to refugees, asylum seekers with “even children not entitled to hospital care unless in an emergency” and that “there may be human rights issues with this”.

Cabinet spokesperson Phumla Williams could not confirm whether a new version of the bill had been or will be submitted, but did indicate that Cabinet would not meet in the week of November 12-16 and would meet again only in the following week.

South Africa has for some time been grappling with the introduction of a Universal Healthcare system, referred to as National Health Insurance. NHI is likely to become a hotly contested election issue with some analysts arguing that the looming ballot is behind the haste to push this bill through.

No Minister Motsoaledi. Can't agree with you on NHI. You can't penalize 'wealthy' (+middle class people) for govts failures. While you personally have achieved great things this proposal will deny the rights of those who can afford not even better but just reasonable care.

The Treasury letter was signed by Ismail Momoniat, the acting Director-General of Treasury, and was addressed not to Minister of Health Dr Aaron Motsoaledi or his Director-General Dr Precious Matsoso, but to Dr Olive Shisana, the Presidency’s adviser on NHI. Various sources have suggested to Spotlight that Shisana is the driving force behind attempts to push through the bill in its current form. Shisana declined to answer questions sent to her by Spotlight – merely referring us to Treasury.

Spotlight also understands that senior officials in the Department of Health have not been consulted on the latest round of changes to the Bill and that the new version was sent directly to the Health Minister Motsoaledi for its passage through Cabinet. The National Department of Health declined to answer a set of questions sent by Spotlight, also batting the questions to Treasury.

When Motsoaledi says NHI is the land question of health, he is inciting us racially. He wants to throw SA into internecine racial binaries. He wants us to wrestle with the racial "bone" while his incompetence goes unaccounted for. Some of us aren't dom Minister. #NHI

The Treasury letter stated that it is unable to support the bill in the form due to be submitted to Cabinet and that the bill should be revised and resubmitted to Cabinet. It argued that a “more measured, gradual and practical approach is required to the shifting of major functions between spheres”.

“NHI is very, very important, but I don’t understand the rush. Ironically if the questions raised by Treasury aren’t answered then NHI will end up being delayed indefinitely,” said Mark Heywood, executive director of SECTION27.

“The new bill being advanced by Olive Shisana and the minister will create a fund that is vulnerable to massive corruption and capture.”

“It’s sad that this is happening now,” said Heywood.

“The overwhelming message of the recent Health Summit called by the President, that Dr Shisana is meant to work for, was that we first need to focus on fixing that health system. Instead Dr Shisana is ignoring not only the written submissions made by many organisations but also the 600 people who attended the President’s Health Summit.

The letter and its annexure specify a number of “major problem areas” and legal concerns with the current version of the NHI Bill. One of the key issues is that the bill will remove many aspects of the health function and health budget from provinces – fundamentally changing the current arrangement by which provinces are responsible for the running of their healthcare systems.

“As it stands the bill introduces massive uncertainty into the intergovernmental financing system and the location of health functions”, reads the letter.

Treasury also cautioned that it is important that a legal opinion be secured on the shifting of provincial functions to reduce the risk of delay through further constitutional challenges.

Knives out for (Minister of Health) Motsoaledi – Headline
Glad to see people starting to stand up to him. The current health system is a disaster. He must learn to run it properly first, before trying to introduce NHI. Currently he is a threat to the nation's health.

According to Treasury such a provision is “highly premature given that it will take years for the Fund to be meaningfully offering services equivalent to those existing 8.8 million current medical scheme users access from the private sector”.

It goes on to say that this move is “unnecessary at this point and will be perceived as extremely threatening to existing medical scheme users and tax payers, to the entire private health sector and will undermine investment.” They warn that this section of the bill “will almost certainly bog the bill down in endless legal challenges”.

Other concerns raised by Treasury include:

Each of these and other issues are discussed in more detail in the annexure to the letter that Treasury sent Shisana. The letter and annexure can be downloaded here. Spotlight considers the publication of these documents to be in the public interest.

Treasury’s concerns with the NHI Bill are in some respects similar to concerns previously raised by some civil society organisations. SECTION27 and the Treatment Action Campaign said in their submission on the NHI Bill:

However, the organisations made it clear that this agreement does not require agreement with the way in which the change to the health system and the establishment of the NHI Fund has been laid out in the NHI Bill and associated documents.

“Disagreement with the NHI proposals does not, in our case, equate to anti-poor sentiment or satisfaction with the status quo. Instead, the purpose behind our criticism is that we are concerned to ensure the health system reforms that are required are in fact implementable and sustainable.”

Treasury says in the letter that if its proposed changes are being taken seriously as stated, then the bill should be revised and resubmitted to Cabinet with a copy sent to Treasury urgently “so we do not repeat issues that have already been addressed”.

“There needs to be a series of technical and political discussions between Health, Treasury, Presidency and State Law Adviser teams to resolve problematic areas or to revert to previous agreements ,” it says.2

Questions to Treasury were not responded to at the time of publication. Their comment will be added should it arrive. DM

Solidarity welcomes the harsh and comprehensive criticism the acting Director General of the National Treasury, Ismail Momoniat, levelled at the controversial National Health Insurance Bill. This criticism came to light after a letter to the Department of Health was leaked. Morné Malan, a senior researcher at the Solidarity Research Institute (SRI) explains: “The version of the bill released for comment in June this year, has already been criticised from all quarters. It is encouraging that Treasury has now also joined the fray, smothering the flames of ideology by throwing cold water of reality on them”.

Treasury’s letter suggests that the bill, as amended in October, does not serve before cabinet before thorough consultation has taken place and extensive changes have been made to it as it currently reads. Treasury’s criticism relates to virtually every single aspect of the draft legislation. Malan lists the following points of criticism:

From a legal point of view

From an economic point of view

From a practical point of view

From a socio-political point of view

“It is almost as if Minister Motsoaledi considers this bill to be a piece of superhero legislation that trumps all existing laws, including the Constitution!
“With regard to its financing, even Steinhoff’s financials made more sense. It will involve huge expenses and not the faintest idea on how it will be financed, with Minister Motsoaledi still offering uncertainty and wishful thinking as a funding model.”

Solidarity is greatly encouraged by the Treasury’s pragmatic approach towards the NHI and demands the co-operation of the Health Department in this regard. Malan concluded, “This letter is a major blow against the ideologically drive approach followed by the Health Department up to now. The threat to health care providers, and the population as a whole, posed by the current format of the proposed NHI, is real. A letter such as this creates hope that islands of reason still exist within the ruling party, where practical and economically responsible considerations still hold weight. This letter is a very positive development for all who expressed their concerns about the proposal. In this boxing match it is encouraging to the South African public to be able to look back and see the Treasury in their corner.”