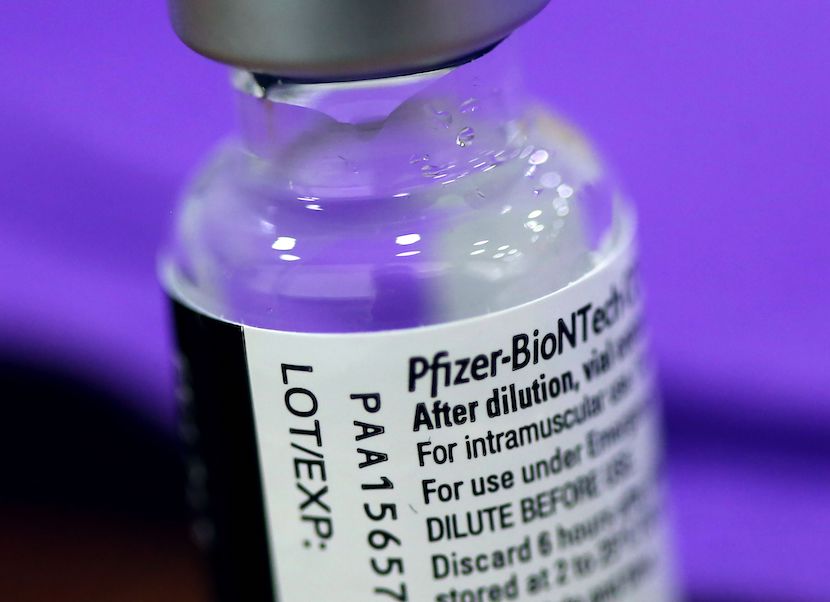 When the newly discovered Omicron variant first broke cover, scientists and medical experts were concerned about the efficacy of Covid-19 vaccines in the face of the new strain. Pfizer has said that a third dose of its vaccine “neutralised the Omicron variant in lab tests” while the two-dose inoculation was “significantly less effective” at shielding from the virus. However, the pharmaceutical company has stated that two doses may still protect from severe Covid-19 illness. – Jarryd Neves

Two vaccine doses were significantly less effective against variant but could still protect against severe disease, Pfizer and BioNTech say

By Joseph Walker of The Wall Street Journal

Pfizer Inc. PFE -0.62% and BioNTech SE BNTX -3.55% said that a third dose of their Covid-19 vaccine neutralized the Omicron variant in lab tests but that the two-dose regimen was significantly less effective at blocking the virus.

A third dose increased antibodies 25-fold compared with two doses against the Omicron variant, the companies said. Still, two doses may prove effective in preventing severe illness from Covid-19, they said, because immune cells are able to recognize 80% of parts of the spike protein that the vaccine targets.

The results were issued in a press release by the companies, and weren’t peer reviewed and published in a scientific journal.

The findings from the companies’ early study, and one by scientists in South Africa, suggest that three doses will be needed to produce a similar immune response against Omicron as was provided by just two doses in earlier strains of the virus.

It also bolsters the case for repeated and periodic boosters to maintain people’s immune defenses against an evolving Covid-19, the companies said.

“This is very positive news that should make everyone even more motivated to get vaccinated” and get a booster, said Pfizer Chief Scientific Officer Mikael Dolsten.

The companies’ current vaccine will provide a strong defense against Omicron, especially if people get a booster shot, Dr. Dolsten said. The three-dose regimen, he added, could provide stopgap protection against Omicron through the winter and until a new vaccine targeted directly at the variant would be ready if needed.

Pfizer and BioNTech are working on an Omicron-specific vaccine that they hope to have available by March 2022 if the variant becomes widespread by then. Researchers started working on the new vaccine on Thanksgiving Day, Nov. 25, shortly after Omicron was identified.

The vaccine trains the immune system to fight the virus by generating immune-system soldiers known as antibodies, which attach to the virus and prevent it from replicating in healthy cells. The vaccine also produces other immune-system fighters called T cells that can kick in after infection to help target and clear the virus, preventing more serious disease.

Pfizer and BioNTech said that Omicron still appears susceptible to T cells produced by the vaccine.

Dr. Dolsten estimated there is a greater than 50% chance that Omicron becomes the dominant strain spreading in the U.S. by the spring, though it is too soon to know with certainty, he said.

The preliminary lab data comes from an analysis of blood samples from vaccinated patients measuring antibodies capable of neutralizing the virus causing Covid-19, including the Omicron variant. Blood samples were collected three weeks after patients received their second dose, or one month after receiving their third dose.

The number of antibodies generated by a third booster shot against Omicron is similar to two doses against an older strain of the virus, the companies said.

Monica Gandhi, a professor of medicine at the University of California, San Francisco, said the results suggested two doses will protect many people from getting bad cases leading to hospitalization or death.

“Two doses are still effective against severe disease, whether people get boosters or not,” said Dr. Gandhi, who is recommending boosters for high-risk patients, including those with HIV. “For people who are at high risk of severe disease, it’s so important to get them boosted, but I don’t think it’s mandatory for young healthy people.”

The company’s early findings come a day after scientists in South Africa reported findings from early lab tests indicating a 41-fold reduction in the Pfizer-BioNTech vaccine’s neutralization of Omicron than the original version of the virus.

The researchers, however, found greater antibody responses against Omicron in blood taken from subjects who were fully vaccinated and had previously been infected with Covid-19.

The companies will continue to work on a variant vaccine despite the promising signs that boosting with the original shot offers good protection against Omicron, said BioNTech Chief Executive Uğur Şahin. That is because they would need to see more data on how their vaccine holds up against the new variant, including real-world effectiveness data, expected in the coming weeks.

“Only in combination will we understand the relevance of this data and potential protection against Omicron-mediated disease and severe disease,” he said.

Real-world data on vaccine effectiveness against Omicron won’t be available for at least six weeks, Dr. Şahin said, because the case numbers need to be higher before this can be measured.

Meanwhile, the companies are moving forward with manufacturing an Omicron-specific vaccine. The first doses, for experimental use, will be ready in January, BioNTech executives said.

Omicron was first identified by scientists in South Africa last month. Since then the World Health Organization has deemed it a variant of concern. And it has since been detected around the world, including in the U.S.

Researchers have been trying to understand how contagious the new strain is, as well as how well it might be able to evade Covid-19 vaccines and whether it causes severe disease. Some preliminary reports suggest the variant is more contagious but might cause milder disease, though researchers say it is too early to know.

Pfizer and BioNTech said they expect to make four billion vaccine doses next year, even if an Omicron-specific vaccine is required by then.

Dr. Dolsten said that regardless of how widespread Omicron becomes, continued booster shots will likely be needed going forward to provide protection against Covid-19. A fourth booster dose is likely to be needed in the spring or fall of 2022, he said.

“It’s increasingly clear you need to have a long-term perspective, with continued boosting to have strong durable immunity,” said Dr. Dolsten. “If the landscape looks similar to today, we will likely continue to boost with the current vaccine.”

—Denise Roland contributed to this article.