Here’s another really special engagement from the Barclays Africa-sponsored conference. Peter Diamandis is a best selling-author, successful entrepreneur and the co-founder of Silicon Valley’s revolutionary Singularity University. He “gets” exponentiality. And has made a study of how it makes products and services that are scarce today into cheap and abundant tomorrow. History is full of examples – Peter talks to the aluminum story – but for SA the biggest learning is what is happening in the power sector. Diamandis, who works closely with Pretoria-raised entrepreneurial genius Elon Musk, warns that investing in expensive, capital intensive coal and nuclear power plants would be a terrible mistake as the law of exponential growth in this sector is making the cost of renewables ever cheaper. A must-listen interview. Especially if you happen to live in Pretoria. – Alec Hogg

Peter Diamandis, you’re about to leave South Africa after a first visit here.

I had five days here and, hopefully the first of many visits.

You are, not only the co-founder of Singularity University but also wrote a best seller called Abundance – something which is changing the world.

It’s changing the world and I think it’s changing Africa, as a continent, as much or more than anyplace else. It’s the notion that what used to be scarce and expensive – technology is moving that to a world of abundance. The ultimate example I use is that today a Masai warrior in Kenya with a Smartphone, has access to more knowledge and information that the President of the United States had 20 years ago. That’s extraordinary. We don’t think about this. We don’t think about the fact that that Smartphone enables us to have access to the world’s information, to free video conferencing over Skype, high definition video cameras, still cameras, GPS, libraries or books, music and all these things – for free. We are going from scarcity, where you’d have to spend hundreds and thousands of dollars, to zero today, making it abundantly available for everybody.

It also opens the opportunity for a billion potentially creative African minds to sell their wares globally….

Absolutely, so we’re heading towards a world of hyper global connectivity. In 2010, five short years ago, we had 1.8bn people connected online. Today it’s about 2.8bn. By 2020, we’re going to a world of 8bn connected people. Eight billion people with access to the internet with a megabit connection. But also access to the worlds’ information on Google, access to massive computational power on Amazon Web Services, to 3D printing technology. Access to the power and technology that was only available to governments or corporations just 20 years ago will be available to almost everyone. It’s going to unleash the creative energies and power and the ability for African entrepreneurs, and let’s be clear, a lot of Africans have been entrepreneurs to survive but now when they’re empowered with more and more capabilities…..

In fact, if people can start to solve problems locally, and innovate, and then create products and services they can sell the rest of the world – we get really trillions of Dollars of new economy flowing in.

It all started with Moore’s Law, back in 1965. How long can Moore’s Law continue?

Gordon Moore was the founder of Intel. In 1965 he published an article which basically said that over the last seven years he’d seen the number of transistors in computer chips doubling for the same price every 18 to 24 months. This price performance doubling of computing power has held for the last 50 years and is expected to continue. Every time a form of computational power runs out of steam, we discover something new.

The first computers were electro-mechanical. Then we had vacuum tube, and relay and transistors and integrated circuits. Perhaps next there’ll be quantum computers or biological computers. We don’t necessarily know, there’s lots of competing approaches. But what we do know is that they’re getting cheaper and faster and those computers are powering a whole range of exponential technologies.

In South Africa, we are struggling with scarcity of electricity, and there are all kinds of decisions being made now. Perhaps not bearing in mind what you’re teaching at Singularity University…

Yes, which is really, unfortunate. Africa should be one of energy richest continents on the planet. It’s a continent bathed in sunlight, and what most people don’t realise is that the Earth is bathed in five thousand times more energy from the sun than we consume as a species in a year. So there’s plenty of energy. It’s just not in usable form yet. But what’s going on in labs around the world is the cost of solar is dropping precipitously, and the production rates are growing exponentially. Africa should become a solar-based economy, where it’s distributed power generation in every home, in every village, around the continent. To really become completely energy independent and, in fact, become a net energy exporter. This is very possible, and something that I believe the leadership here should be thinking about.

Elon Musk is a Pretoria boy, who has made a big name for himself in the United States. His cousins, the Rive brothers, are running Solar City the biggest solar business in the U.S. It’s a pity that they’re doing all that great work over there and it’s not getting back to this country….

Well, we’ve seen this happen repeatedly. The Manhattan millionaires and early billionaires had the cellphones that cost a million Dollars and barely worked. The wealthiest start with the technology and they pay a ridiculous amount of money for something that barely functions. Then it flows to the point where, today, you can buy an Android handset for $50 and it’s extraordinary compared to what existed.  I think the work that Elon and the team are are doing, will eventually flow here, to Africa, and Africa will be one of the biggest beneficiaries thereof. The projection is that the United States could be 100 percent solar in 20 years. Africa can be that very soon thereafter.

What is this thing about space? You mentioned Elon Musk now. He’s in the ‘space game’. Here, from South Africa, Mark Shuttleworth desperately wanted to go into space. We’ve got Richard Branson involved in space. You, personally, are involved in one of your entrepreneurial adventures there. What is it that that excites you guys so much about space?

I think it’s growing up on the tail end of Apollo and the Shuttle Program and this amazing vision of what was possible, what is possible, in the future, and being frustrated that NASA never got us there. A lot of the people that you’ve mentioned have revolutionised industries, Elon with PayPal and banking, Paul Allen with Microsoft, Richard Branson with multiple industries, and you know, when you’ve revolutionised an industry and you’re not going to, sort of, hang your hat on the wall and say, “I’m done.” You’re going to look for the next big thing to do, and space represents one of the biggest opportunities for humanity. I’ve had the pleasure of starting about a dozen companies in the space business, and am most excited about Planetary Resources. That is looking at actually going out to prospect ‘near earth’ asteroids, whose asteroids are trillion Dollar assets. They are rich in fuel, metal, platinum group metals that are important for growing the global economy.

In this country we look at platinum, having 70 percent of the world’s resources, and think it will continue indefinitely. But if there are asteroids that you are going to mine for platinum…it does change things.

Well, what most people don’t realise is when the Earth was formed all the platinum sank to the centre. It’s a siderophilic and iron-loving metal. It’s also very dense. What remained in the crust of the Earth are the light metals, the aluminium, the boron, and so forth – the light elements. All of the platinum being mined from South African mines today, are previous asteroid impact sites and the platinum on some of these asteroids that we’ve identified are a thousand times the concentration of what we’re seeing here, on the ground. The platinum side of our story is a long way off. The near-term story, within the next five to seven years, is fuels, the hydrogen and oxygen for fuelling our economy in space, but ultimately I do think we’re going to be seeing the extraction of strategic metals from space. That will affect the cost of platinum. Aluminium used to be a most precious metal on the planet because it was so difficult to extract from bauxite…

That’s a great story. Tell us… 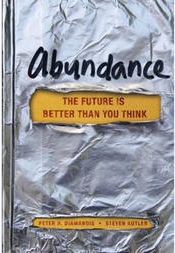 Sure, so the year is 1840. The cover of my book ‘Abundance’ is covered in a fake aluminium cover, because I opened the story of Napoleon, who in 1840 invited the King of Siam over for dinner. To demonstrate his wealth at the Palace of Versailles, Napoleon feeds all of the troops with silver utensils. Napoleon himself eats with gold utensils. But the Royal guest, the King of Siam, is fed with aluminium utensils because aluminium in 1840 was so precious. It was so difficult to extract it from this clay-like substance called bauxite. It was worth more than gold and platinum put together. In that same year the Washington Monument in Washington D.C., that long, tall monument was built. And in the capstone, at the very tip, is aluminium because it was the rarest metal. Then we developed this technology called electrolysis that made it so cheap and so easy to extract the aluminium from bauxite that we now use it with a throw away mentality. So the question is what else do we think of as scarce that could actually become abundant? I think almost everything.

At Singularity University, just talking and being exposed to your faculty here, you have put together an incredible bunch of people. However, if we go back to another story you spoke about, the founders of PayPal, Peter Thiel, Elon Musk, the founder of YouTube and LinkedIn also came out of that business. It’s extraordinary how they got worked together on Paypal and have gone on to do bigger things. Is there anything we can learn from that?

It’s mindset. Mindset is the most important thing. If you believe you can or you believe you can’t, you’re right. Most people are put down by negativism and the news. Or put down by what their parents did or what their friends said they can do. It’s really about the realisation today that we are able to truly go ten times bigger in our lives and our work. What are our moon shots? Everybody, as an individual, as a corporation, should have a moon shot because, unless you have something you’re aiming for that is truly much bigger, you are bound to live a life of incrementalism.

You are doing your bit to introduce moon shots through X Prize….

X Prize is definitely one of the most important things in my life for moon shots. It’s a realisation that the world’s biggest problems can be solved. The world’s grand challenges represent opportunities for innovators to reinvent things, so at the X Prize Foundation we’re launching X Prizes in healthcare, in global literacy, in carbon capture, in mapping the ocean floors and changing how we transport ourselves in adult literacy. All of these things are areas that we believe can be solved if we challenge our entrepreneurs to really think ten times bigger and give them a clear focus goal to go after.