There just has to be a better way. With Gauteng’s continuing chaos over e-tolls, you’d have thought Sanral would know better than to tackle the even more antagonistic ratepayers of Cape Town. But Sanral is doing just that, warning that unless it gets its way Cape Town’s already heavily congested roads will get worse. Sanral wants to use e-tolls to fund a R10bn upgrade. The City is fighting it in the High Court. Perhaps both parties should remove their blinkers and consider what the city’s roads are likely to look like in ten years. Research or even go visit a few of the driverless car revolutions evident by plants springing up around the world; not just the well documented Google experiment in California but Volvo’s 100 car test in Gothenburg and massive new factories in China. That might open a few eyes and to a more efficient, lower friction future. – Alec Hogg 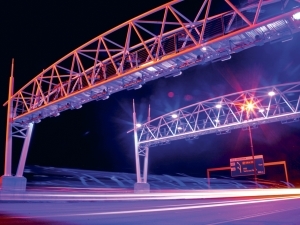 The warning comes after the city asked the High Court to prevent Sanral, as the Pretoria-based agency is known, from signing a deal with the Protea Parkway Consortium to use road tolls to pay for the redevelopment of freeways. The start of an electronic toll system around the country’s biggest city, Johannesburg, and the capital, Pretoria, in 2013 met resistance from road-users and labor unions who encouraged people not to pay, saying costs for roads should be funded from taxes.

The renovation of about 150 kilometers (93 miles) of freeways around Cape Town will help to decongest the region’s roads, Sanral Chief Executive Officer Nazir Alli said in a June 17 interview in Bloomberg’s Johannesburg office.

“Cape Town will have to make an improvement on the road network,” Alli said. “The economy of Cape Town will suffer” for as long as court proceedings continue, he said.

TomTom NV, the Dutch maker of satellite-navigation devices for cars, named Cape Town as South Africa’s most congested city in 2014, according to an index published on the company’s website. A commute in the city that should last 30 minutes takes an average of 53 minutes to complete on most days, TomTom said.

Cape Town is working within its means to improve the most clogged areas of its network, Brett Herron, the city’s mayoral committee member for transport, said in an e-mailed statement. The city is South Africa’s only major metropolitan area controlled by the opposition Democratic Alliance party.

“We are doing so without privatizing the roads and burdening our residents with toll fees,” Herron said. Sanral should “focus on how it can fund only what is necessary to maintain acceptable traffic flow conditions without contriving a case for a multi-billion rand project,” he said.