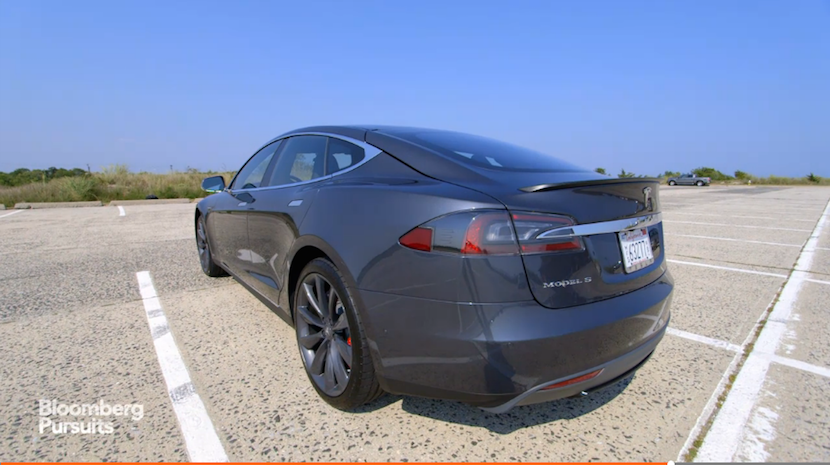 South Africa’s most famous export to California, super entrepreneur Elon Musk, is back in the news. After producing a car that somehow achieved a score of 103 in a test where the maximum was 100, his Tesla Motors has managed to improve on that impossible achievement. The top-of-the-range Tesla Model S P90D with all options, including  “ludicrous mode” (0 to 100 kph in under 3 seconds) costs around R2m. But as Bloomberg’s Hannah Elliott argues in the compelling video embedded below, it’s worth every cent. – Alec Hogg

Sure, his schedule these days is full, managing SpaceX and developing Tesla’s game-changing Model X, a gullwing electric SUV.

But he’s also the guy who sent a block of cheese into space as an inside joke, who met his actress wife in a European nightclub, and who named the new warp-speed option in his posh sedans Ludicrous Mode, after terminology from Spaceballs. When I visited his Bel Air home a few years ago as part of a story on his work, we played sci-fi video games (he’s very good) and talked about cult classic films.

So it stands to reason that the current crown jewel in Musk’s engineering repertoire, the 2016 Model S P90D, would have to be fun enough to drive to keep its mastermind creator meaningfully engaged.

I can vouch for that, and more.

P90D gets its name from the “Dual” motor arrangement that enables its all-wheel drive and the 90 kilowatt-hour battery pack that boosts drive range by 6 percent. (The “P” is for “performance,” natch.) It’s not the normal Model S. It’s not even the P85D Model S that broke Consumer Reports. This one is even better. It uses the 90 kw dual-motor combination (a $35,000 upgrade over the $70,000 base model) to eke out the equivalent of 98 mpg in highway driving and approach distances of 300 miles on one charge.

Assuming 15,000 miles and $0.12 per kwh, you’ll spend $650 per year to fuel it, according to the owner’s manual. According mpg data from the US Department of Transportation, the average car will cost $1,519 a year to fuel, assuming the same mileage and a price of $2.37 per gallon of gas.

Driving the P90D is like being high. (Let’s say …  getting a runner’s high.) It’s like entering a different plane. You seem to move through space and time at different speeds than people and objects around you. You feel untouchable. The P90D is not as nimble as a 911 or an M3. It shouldn’t be—it’s a sedan, not a coupe. But it manages traffic like Serena Williams manages anyone unlucky enough to face her across the net—with extreme fluidity, unrelenting beauty, and devastating force. This is where the good visibility throughout the side and rear windows, the front- and rear-running cameras, and the lane-departure warning systems really shine.

The car shows even better, though only by a fraction, on the straightaway. Tesla has done a good job of implementing its AWD with ($2,500) smart air suspension; that, coupled with the fact that the lithium-ion battery covers virtually the entire floor of the car, results in the driver feeling glued to the road as she accelerates. The instantaneous torque and silent ride only enhance the euphoria. Flooring the gas pedal on the way out to Long Island last week threw me back into the seat so forcefully I might as well have been hit by a linebacker.

Lucky thing those leather seats are alcantara-lined and as tall, firm, and steady as Steve Weatherford.

Read also: Elon Musk has a problem – can’t satisfy buyers, they love Tesla cars too much

The interior of the car complements the clean, fresh exterior curves, automatic Xenon and LED headlights, and (optional) 21-inch rims and rear spoiler that so coolly define its exterior—and let everyone know you have the top-tier Model S. The touch-activated exterior door handles embody perfectly the idea that technology should enhance, not impede, normal daily life. In this instance, that means the doors opened easily, immediately, every time I approached. It means they recessed back to flush with the car the moment I locked them and walked away. There was no delay, no haggle or hitch in the transaction.

One thing that did strike me as weird is the fact that while everything inside the P90D is touch-screen and push-button controlled, the actual shifter for the car—the thing that puts it in drive or reverse—is a stick on the steering column like in those old Buicks from the 1960s. It’s more of a design cue rather than function issue—the shifter worked very well and stayed blissfully out of the way while I adjusted sound, climate, and navigation—but it seemed an unexpected nod to a nonexistent transmission.

I have also read complaints about how the door handles mesh too closely into the inside of the door and how there aren’t enough cup holders—standard gripes about “too much form over not enough function.” I disagree. This is a luxury car, not a school bus. Its has all the heated seats, mirrors, power outlets, and sunshades you need. It’s not meant for Big Gulps and Slurpees.

While Tesla practiced restraint with unnecessary accoutrements, it has provided abundant headroom and leg space in both the front and back cabins. And, as we’ve come to know about Model S, there are two large trunks—one under the hood, one conventionally in the rear. I found myself feeling quite forlorn after I gave this car up and had to return to quite less storage space in a similarly configured sedan from a competing brand.

What to Look At

Once inside, two things commanded my attention: The 17-inch computer in the center console and the ($1,500) glass panoramic sunroof that spans the roof of the car. Both are mesmerizing. The touch screen is the command center for the car, controlling its charging rate, energy usage, drive mode, and communication with other drivers. You can configure it to your taste, touching and dragging down music playlists, maps, images, and phone information based on what you prefer.

The sunroof wide open somehow enhances the overriding message of the Model S. It’s the one car intended to show that modern personal transportation can and should be something radically cleaner, faster, and better-looking than what it was during the industrial age. Credit the thought to the mood- boosting Vitamin D soaking into my skin via that portal, but the connection made sense at the time.

Where to Spend, Where to Save

But back to the task at hand. I’d skip the $1,000 carbon fiber spoiler option, the $4,500 21-inch rims, and the $1,000 cold weather package. (The Model S has been the best-selling car in Norway, true, but if you’re buying one stateside, chances are good you live in California.)

I would splurge on the ($2,500) high-fidelity sound system, the ($3,000) range extender upgrade, and the ($2,500) autopilot system. The range extender gets you dozens of extra miles per charge, and the autopilot software adapts cruise and steering control to help driving under potentially stressful conditions. The car will charge on 120 volt, 240 (washer/dryer style) volt, and electric-car specified J1772 charging adapters, but since charge time takes 12 hours on the 240v version, I’d pay the $750 extra for the mega-power wall connector you can have installed in your garage and plug directly into the car.

The P90D is well worth it. Sedans never used to be about having a good time behind the wheel. Electric cars used to be more holier-than-thou than the Pope. But Musk has changed the sedan to match his own ideas of play. Go, buy, enjoy: You’re going to have so much fun.