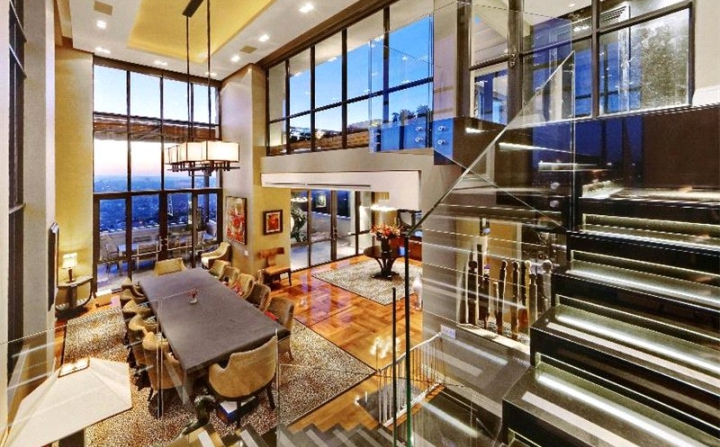 “Paul is a real estate novelist…” sang Billy Joel in his classic Piano Man, the perfect description for those who turn wrecks into renovator’s dreams; broom cupboards into cosy. But at R60m for a penthouse, you might expect more than a line opening with “Refrigerated walk-in wine room, 4 palatial bedrooms with the wooden floor theme continued, with marble covered en-suite bathroom and a state of the art home cinema….” Of course the copy goes on, and on. But the real selling of the most expensive penthouse ever marketed in Gauteng won’t be done by a Paul. The man with that job is Wayne Venter, a Pam Golding agent who specialises in Sandton Apartments. The price of this penthouse is almost 20 times Venter’s usual price bracket. So as you can see from our interview, the agent is still working out how to tap into the super rich set who’ll be the most likely buyers of this prime piece of real estate. His efforts would have been helped along by my interview on CNBC Africa’s Power Lunch – a programme that reaches into the most luxurious homes on the continent.

ALEC HOGG: Wayne Venter from Pam Golding Real Estate Properties is with us in the studio to talk about the top end of the real estate market, but it’s not just the top end.  It’s the top-top end.  You guys are marketing an apartment – otherwise known as a flat – for R60M in Johannesburg.  We know that the Atlantic Seaboard has seen some big prices, but this seems a little unusual for this part of the world.

WAYNE VENTER: Look, it is an unusual price point, but it is probably the most beautiful penthouse that exists in

Sandton.  I’ve seen many of them and I’ve never seen anything like this.  The attention to detail is something else.

ALEC HOGG: Where is it?

WAYNE VENTER: It’s in a building called The Regent. It’s actually a double penthouse.  They bought two then they gutted and refinished them.  It’s a Stephen Falcke interior and as I said – absolutely beautiful – no expense spared.

ALEC HOGG: What is the highest price that’s been paid for a penthouse in Johannesburg?

WAYNE VENTER: The highest price that I’m aware of was R35m that was paid for a penthouse in Michelangelo Towers.

ALEC HOGG: Was that Brian Joffe?

WAYNE VENTER: No.  I’m not sure if I should be mentioning the name, – it was Sean Summers’ unit.

WAYNE VENTER: Correct.  Sold – can you believe it – to someone who doesn’t even live in Johannesburg?  They live down in Knysna so its their Johannesburg base when they’re up here on business.

ALEC HOGG: What about the kind of person you’d be selling a R60m penthouse to?

WAYNE VENTER: It’s potentially a foreigner.  I mean it’s less than £4m but it’s so difficult to say.  Look, it’s a brand-new listing.  It is the most expensive penthouse that I’ve seen so far marketed so it’s still early days.  I’ve only had the mandate for about a month, so I guess we’ll see.  But it’s amazing the amount of interest that it’s generated already.  I had the Wall Street Journal contacted me last week, and had another TV program contacting me as well, so it is definitely getting a lot of attention.

ALEC HOGG: Well, I’ve got a feeling that you’re going to have a few more phone calls because CNBC Africa goes into where

many of the potential buyers of expensive South African properties live on the continent.  We know DRC’s and Zimbabweans are big buyers of properties in Cape Town.  Are they starting to buy in Johannesburg, too?

WAYNE VENTER: In terms of the buying pyramid – that’s right at the top.  Its right at the top and the air is very thin up there so it’s difficult to say.  That R35m penthouse which sold in Michelangelo, they were originally asking R50m. Michelangelo is a completely different building to this and again, the finish to this unit is unlike anything else that I’ve seen.

ALEC HOGG: For the property guys; R60m: how much does that work out to per square metre?

ALEC HOGG: And what does that compare with what you’ve seen?

WAYNE VENTER: Nothing else in Johannesburg.  The highest cost per square metre that I’m aware of is about R60 000.

That’s the highest cost per square metre but again; that unit wasn’t finished anywhere like this.

ALEC HOGG: People from other parts of Africa investing in these properties?

WAYNE VENTER: Again, from an investment point of view you’re never going to see a return on that so that’s purely a ‘buy to live’.  You’ll never get the rental to actually warrant hanging onto that as an investment.

ALEC HOGG: So you’d have a yacht in Monte Carlo.

ALEC HOGG: A flat in Manhattan and now you’ll have a penthouse in Johannesburg.

ALEC HOGG: Is that the kind of person you’re looking at?

WAYNE VENTER: Most likely.  But again, it’s so difficult to tell.  There’s probably a 5% or 10% chance that the buyer

could be South African and again it’s difficult to say with that kind of property because you’ve probably got to get maybe 30 to 50 people through the property before you find your buyer.  And that buyer could be the first person or the 50th person so it’s difficult to say exactly where they’re going to come from.  It’s not an exact science.  You just get out there and try to find the right buyer.

ALEC HOGG: But Wayne, how do you market something like this?

ALEC HOGG: But do these rich people look at websites when they want to buy property?  Surely they want to be taken there in a Rolls Royce ?

WAYNE VENTER: 100%, but firstly, what happens is they’ll pick it up on the website.  Then they’ll contact us for a viewing.  So that’s generally for overseas clients.

ALEC HOGG: Maybe the wife will pick it up on the website.  But I can’t imagine someone who’s got R60M to throw around

would be actually trawling the web.

ALEC HOGG: He has a house in Camps Bay that he’s put on the market for R300M.  I wonder if you’ve heard of anybody wanting to buy that one.

ALEC HOGG: Is that over the top?

WAYNE VENTER: I haven’t seen the property but that’s huge.  The biggest price that I’m aware of thus far was one of the apartments that were in The One and Only that went for, I think, it went for about R110M.  That’s the biggest price point that I’m aware of.  Yes – absolutely.  There was that house in Sandhurst – I don’t know if you know about it – that belonged to the late owner of Cell C, which was massive.  And we had that on our books originally for R120m and it eventually sold at auction.  It went for R65m.

WAYNE VENTER: To a Nigerian.  Can you believe it?

ALEC HOGG: Well, I do believe it because I think that’s where your buyers are likely to come from.

ALEC HOGG: So if there’s a Nigerian watching this now or a Zimbabwean or a DRC person with lots of money, you know

that there’s an apartment going for R60m.  You don’t have to go and pay some middle-man an extra R15m.