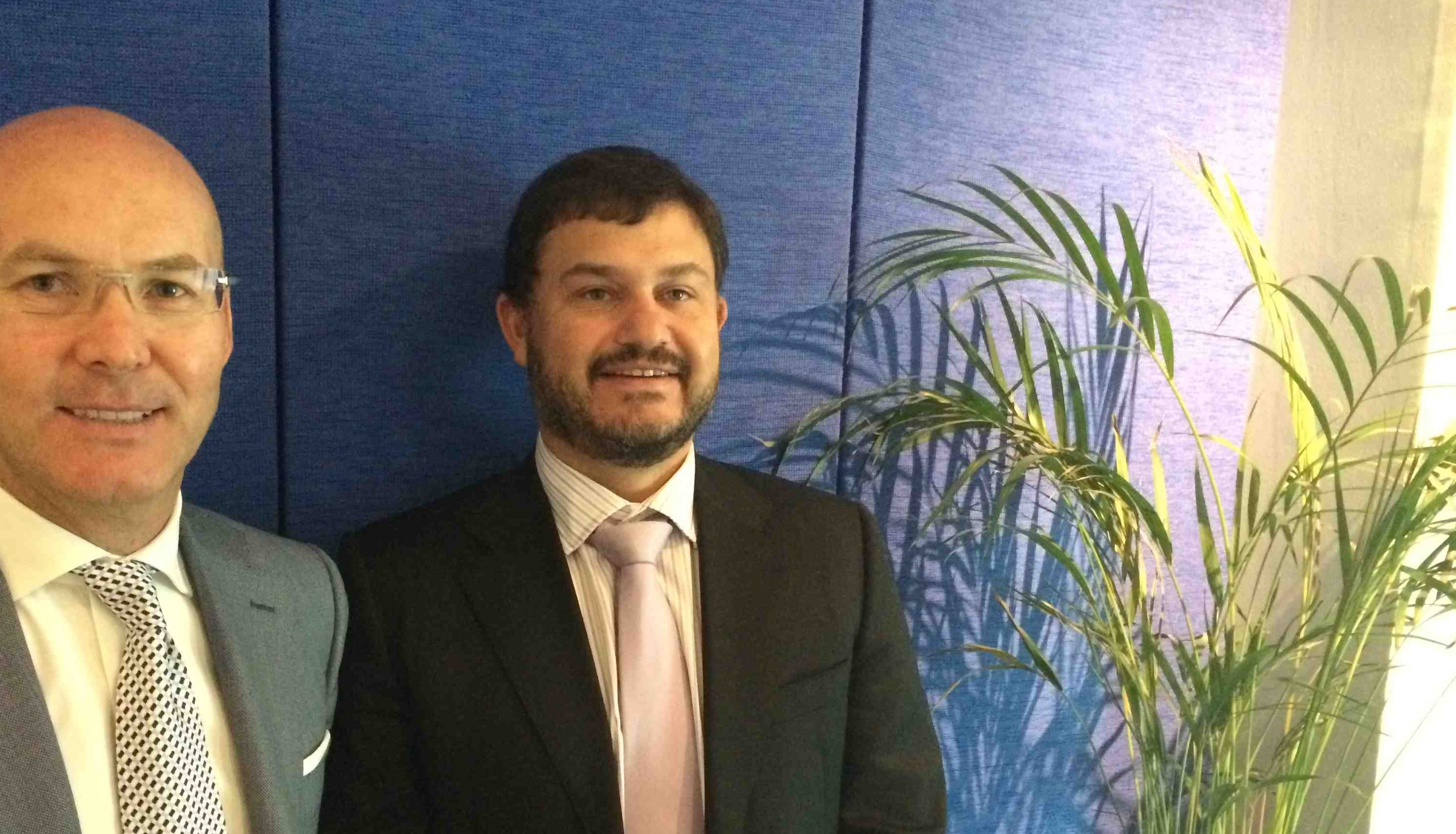 PSG Konsult listed on the JSE this morning at a 10% premium  to the level where shares traded on the OTC market. The company’s CEO Francois Gouws (left in pic) and PSG Group’s CEO Piet Mouton popped up to the Biznews studio to offer some background into the first business PSG founder Jannie Mouton started – and explained why they expect it to flourish in the years ahead. The interview starts with Gouws explaining why he returned from a top job in the City of London to run PSG Konsult in his homeland. – AH

FRANCOIS GOUWS:  Jannie (Mouton) spoke to me about PSG Konsult and I think the big attraction of the firm really was that it had a massive distribution footprint in South Africa.  We have 620 advisors in 200 offices, in South Africa as well as in Namibia, with 150 000 clients.  I looked at that and thought ‘it’s a formidable distribution network.  Imagine what you can do with it’.

ALEC HOGG:  It was a bit of change for you, though.  You were at the top of the tree in London.

FRANCOIS GOUWS:  In some ways, it was a change.  In other ways, it wasn’t.  Fundamentally, what we do is not just distribution.  The product we sell is an investment product, so it’s related to stocks, shares, and funds, which is my core expertise.  However, it’s different because it’s not institutional.  It’s more retail investor orientated.  My own view was that the landscape for the investment banks were changing.  The capital requirements for investment banks were changing, and I just generally thought it would be a difficult environment whereas the environment, in which we operate, I thought, was still extremely attractive and a lot of value could be added.

ALEC HOGG:  Piet, from your perspective, was this always the plan with PSG Konsult?  It’s been around for a long time.

PIET MOUTON:   It’s been around for a long time.  Alec, I think this forms part of Jannie’s philosophy. Quality companies at the end of the day, if they operate in a listed environment – they always perform better.  It’s the same if you take a guy like Usain Bolt.  He’ll obviously run faster in front of the stadium than in practise.  We believe it pushes management just that extra bit harder if they operate within the spotlight, otherwise it’s easy for Francois if he has a poor year.  He just comes up to me and says ‘sorry, it was a tough year’, but now he has to explain it to the market.  It means that management and everybody involved in the company, excels just that little bit better.

ALEC HOGG:  It’s interesting.  It’s kind of a different philosophy, though.  Many other private companies are quite happy to be privately held.  Do you agree with what Piet just said?

FRANCOIS GOUWS:  I do.  I think the reverse side of what Piet’s saying is that the shareholder prefers the underlying entities to be listed, but I think management also likes it.  If you’re a capable management team, you want to express yourself, you want recognition, you want to be rewarded, and you want degrees of freedom.  The fact that you’re operating in a listed environment allows you to explore opportunities, which you might not otherwise have been able to explore.

FRANCOIS GOUWS:  There’s a whole range of benefits.  Share options is obviously one of them, but I was thinking more about being able to issue equity and lowering your cost of equity by virtue of listing, or the rating agencies…  If you want to issue debt, prefer listed companies for the same reasons that our shareholders prefer listed: they like the scrutiny.  That lowers your cost of debt as well, so there are loads of benefits to being listed and I think it provides rigour in an organisation.  It gives discipline and people feel accountable, so I think it’s a win for the shareholder, but it’s also a win for the management groups.

ALEC HOGG:  Is this the last one, Piet?  You’ve had Curro, you’ve had Capitec, and you had PSG Investment Bank at one point in time.  Do you have any other potential listings coming?

PIET MOUTON:   At this stage, there’s nothing in the pipeline, but if some of the companies within the private equity portfolio grow up and become sizeable businesses, we might consider a listing in the future again.

PIET MOUTON:   It’s a phenomenal day.  This was the first business that Jannie started after he left SMK and he started PAG when Jaap was actually with us here in the studio.  He came over and they started this business early in ’95.  It became formalised when Willem Theron joined in about ’98, and they started PSG Konsult, as we know it today.  For us, this is a big day and I want congratulate Francois and his team on a very successful listing and on building the company to where it is today, as well as Willem and his team, and what they’ve done the previous years – before Francois joined.

FRANCOIS GOUWS:  The business has three activities.  You have a wealth management business, an asset management business, and an insurance business.  As I’ve explained, the bedrock of our firm is our 600-odd advisors servicing our 150-thousand clients in 200 offices around South Africa.  I think the heart of the firm is really the fact that our advisors have long-term, very close relationships with our clients.  In many ways, we service our clients from cradle to grave and over multiple generations, so they trust us expect us to help them with their financial affairs.

ALEC HOGG:  The share price this morning: does it bear much relation to the price it was trading in the OTC before this listing?

FRANCOIS GOUWS:  It was trading at R7.45 at the close on the OTC market, and this morning it traded slightly above R8.00.  At the end of the day, we as a management group look towards long-term.  Where the share price trades is not necessarily – and I say this humbly – isn’t necessarily relevant for us in the short term, because what we want to do is we want to build long-term value for our shareholders, and we do that by servicing our clients well, giving them good products, and making sure that we keep their assets safe.

ALEC HOGG:  Piet, from your perspective, what stake are you holding in PSG Konsult?

PIET MOUTON:   We’re holding about 63 percent so for us, I think we would stay at that shareholding.  We do share the same brand (PSG).  Konsult was responsible for building the brand, so I think we’re very much going to maintain the relationship because it’s important for us.

ALEC HOGG:  Your other businesses though, that you have listed…you have diluted down.  Is it unlikely to happen this time?

PIET MOUTON:   I think it’s unlikely to happen.  Each company that we’ve listed has its own story, so one almost has to tackle them one-by-one to get to why the shareholding is at a certain percentage.  For us, we feel comfortable with a 63 percent shareholding, which gives a big enough free flow for other shareholders to get involved in PSG Konsult.

ALEC HOGG:  And Francois’ appointment, was that done with this intended?  He is a heavyweight who had been offshore – ten years, a South African with a name like Francois Gouws.  Was that part of the plan?

PIET MOUTON:   If you look at the way we run our companies, the management teams are totally responsible for the businesses.  We’re constantly looking for quality CEO’s to take companies to the next level.  Francois and Jannie had a previous history and for us, the fact that he considered joining PSG Konsult and that we were able to bring him on board…  He’s top of his class in terms of quality as CEO and for us, that’s fantastic.

ALEC HOGG:  So what kind of targets are you setting yourselves now Francois, going forward?

FRANCOIS GOUWS:  We didn’t capital and one of the benefits of not needing capital, is that you don’t need to make forecasts.  As I’ve said, our current asset base is R235bn worth of assets that we administer, of which roughly half is managed and half is administered.  We benefit from rising markets, so it’s very difficult to set precise targets.  You have to have a view on where you think markets are going in the short term.  We feel markets are still looking relatively favourable, but we are concerned about the changing dynamics of the markets, particularly in relation to volatility, and so we’re quite cautious as that goes.  Saying to investors that we want to grow our top line…part of the way in which you can grow assets is through market movement and the other is through net new money.  Last year, our net new money grew by 15 percent and we’re hoping to beat that.

ALEC HOGG:  We’ve seen Coronation Fund Managers shoot the lights out and that’s part of an asset management company.  You have a big asset management base, as well.  The share price is at R8 today…  What is your market cap?

FRANCOIS GOUWS:   Our market cap is just over R10bn, given where the share price traded this morning.

ALEC HOGG:  How does that go, relative to Coronation?

FRANCOIS GOUWS:  It’s about one-third of Coronation’s market cap.  Just talking off the top of my head, I think Coronation is closer to about R30bn-odd. (actual: R34bn)

ALEC HOGG:  But there’s more to you than just asset management.

FRANCOIS GOUWS:  Well, as I’ve said we have the three divisions: the wealth division, the asset management division, and the insurance division.  Coronations activities are purely asset management and I think that what’s nice about our business is that the three different business gives you a bit of diversification.  However, it’s also complimentary from a branding, technology, and infrastructure point of view.  I think that with financial services, you need infrastructure and technology to make sure that your clients’ assets are safe and that you service your clients properly.

ALEC HOGG:  Well, we’ll see how it compares in the years to come.  Piet, just close off with, if you think of people who are investing in Coronation, I was at a conference last week with asset managers who said they felt it was the biggest short on the market, because it traded at a huge premium to other asset management companies.  From PSG Konsult’s perspective, the timing of the listing seems to be quite good, but you have other strings to your bow and you aren’t as highly rated – yet – anyway.

PIET MOUTON:   Yes, I think so.  There’s a definite big possibility for PSG Konsult to grow over the next couple of years.  Francois spoke extensively about assets under management and we have significantly less funds than the likes of Coronation and Allan Gray, and I think the performance of all the funds are fantastic.  They were all top quarter and in some cases, number one or two.  I think that if we can get the necessary asset flows over the next couple of years, we can look forward to great growth.  That’s only side of the business.  We’re fairly new to the short-term insurance side and I think Francois and his management team have great plans on that side as well.  We really think this is going to be a winner over the next five to ten years.