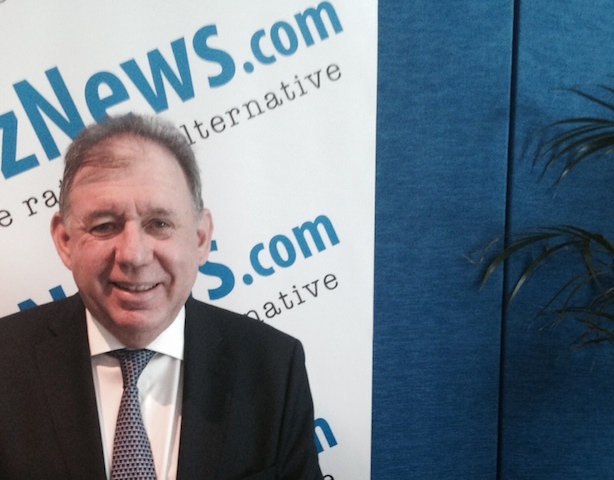 International specialist bank and asset manager, Investec released its combined interim results for Investec Property and Investec Limited today. Investec CEO, Stephen Koseff, said the results demonstrated that the bank was delivering on its promises, and that it would have been even stronger if it wasn’t for the continued weakness of the rand. Investec’s share price started the day off on a strong footing, but lost over two percent at the close of trade today, despite the dip shareholders have seen the price increase by 50% over the last year. Chief Executive Stephen Koseff joined Alec Hogg on CNBC’s Power Lunch to discuss the results, keeping shareholders happy, and delivering return on equity while balancing a strong liquidity position. – LF

ALEC HOGG: Chief Executive Stephen Koseff is with us in London. He said that the results demonstrated that the company’s delivering on its promises. It would have been even stronger, if it weren’t for continued weakness of the Rand. Well, that certainly is an impact because Investec is now a very substantial business in London. He joins us from the U.K. Stephen, if you break up the two sides of the business now, how much is in the U.K. and non-South Africa versus in South Africa?

ALEC HOGG: The share price of Investec is quoted in both London and in South Africa with this dual-listed system. It’s interesting to see that the PLC (in other words, the London-quoted side)…the market cap is a lot higher than the limited (the South African one). Without getting into too much detail, does this mean that you have more foreign shareholders than South African shareholders now?

STEPHEN KOSEFF: We have more shares issued out of the PLC because that’s where we’ve made most of our acquisitions over the last while. The South African business has been built more organically so we bought wealth businesses since we listed in 2002, and you put a much higher multiple on those types of businesses. That’s why we have a bigger U.K. share register than the South African share register. However, about 60 percent of our Investec PLC shareholders are from the U.K. (or international) and 40 percent of our Invested Limited shareholders are international. Basically, we have just over 50 percent of shareholder register, international (non-South African).

ALEC HOGG: It shows how global…

STEPHEN KOSEFF: That was higher pre the financial crisis, and it’s just building itself back up now.

ALEC HOGG: It just shows how global you’ve become. The share price is up 50 percent in Rand terms in the last 12 months. Your book value (tangible NAV) is only up one percent over this period. Stephen, what is the market seeing that we aren’t seeing in the bottom line?

STEPHEN KOSEFF: Well, we sold three businesses that the market really didn’t like us to have. We sold the mortgage business in Ireland, the mortgage business in the U.K., and we sold our Australian bank, which they believed was below scale. We got a good price for the Australian bank, but we would have made a loss on the sale of Ireland. The market liked the clean-up, and so that’s why NAV…the markets look forward. You’re looking at NAV, which is what’s happened in the past and I don’t think they’re too linked. We’ve had a good, clean-up process over the last 12 months.

ALEC HOGG: But it’s a good reflection. We saw a similar story yesterday with Tiger Brands, where, although they’re taking a knock on their Nigerian operation, the market loved it and pushed the shares up very strongly. How much notice do you take from what investors or investment analysts are telling you?

STEPHEN KOSEFF: We have to take a lot of notice. These people are smart and you have to listen to what they say. You don’t always have to agree with them, because you have to run the business day-to-day but overall, there are very smart people out there and you ignore them at your peril, so you have to be shareholder-friendly and try to do the right thing because they’re one of your key stakeholders.

ALEC HOGG: Because a lot of them weren’t very happy when you bought Kensington.

STEPHEN KOSEFF: Yes, that was about seven years ago. Certainly, the U.K. guys were very unhappy when we bought Kensington. They were very happy when we sold it and I think that’s why you’ve seen the share price perform, because they didn’t like that business. It was a different business in another time, so it was tough.

ALEC HOGG: Well, that was the purpose of my question there. Looking at your results itself, you put a lot of store on recurring income and that’s jumped up significantly in this period. Why do you make that such an important number?

STEPHEN KOSEFF: The market doesn’t like on-off income, so I think it gives you a strong underlying base to do the things you have to do in life, and recurring income is much greater quality income than trading income or investment income. We’ve tried to build our recurring income platforms over the last ten years. If you looked at us, there was a time when we made most of our money doing deals. The market really doesn’t like that and it’s difficult to maintain the momentum. If you build your underlying earnings like funds under management, loans, advances, and transactional services, it’s a much better quality income. If you look at what we sold our Australian bank for… Even though we weren’t making a lot of money, we still had a very good client base that generated decent recurring income and another player with a cheaper cost base and a cheaper cost of money could really do very well out of that platform, so they paid us a big premium for it.

Recurring income is very important to us as an organisation but clearly, we still try to do deals. We invest money and we trade, but it’s a lesser component of the overall scheme of things.

ALEC HOGG: I suppose that its part of the maturity, which also are the lessons learned from the financial crisis. You talk in glowing terms about the strong liquidity position and the fact that your capital base is above where it needs to be, but I guess there has to be some kind of balance.

STEPHEN KOSEFF: Yes. You have to try to balance between what a Regulator and a rating agency wants you to hold, versus what your shareholders want you to have in their return on equity. What we’ve had since the financial crisis, are regulators increasing capital requirements quite substantially because they obviously have this concept that they don’t ever want to have to bail out a bank again. You have to balance that though, because the more capital you have, the lower your return on equity relative to the size of your business so those are things that you have to balance quite carefully. We did build up liquidity and we built up our capital over the last few years through the reshaping of our business and the change in our business model.

ALEC HOGG: Stephen Koseff talking to us from the London Stock Exchange. He’s the Chief Executive of Investec. Results released today for the six months to the end of September – very solid, indeed and maybe affected somewhat by the decline of the Rand against the Pound because as you heard from him, one-third of the business profits are now generated outside of South Africa in Pounds Sterling. When that drops by almost 20 percent, you really have to work hard to stand in the same place, but the dividend in Rand terms was up by 11.5 percent to R1.46, if you’re an Investec shareholder. That beats inflation, any day.